If you look around you, you see computers and mobile devices all around. It’s hard to believe then that there’s a drought going on, yet that’s what a new video is telling us. Two of the most famous names in the computer industry, Zuckerberg and Gates, are highlighted in a video touting the coolness factor of being a computer programmer.

This initiative is headed up by brothers Hadi and Ali Partovi, entrepreneurs behind the non-profit Code.org. They are putting the push onto education, asking for more computer science courses at the high school and college level.

According to the Partovis, forty-one out of fifty states don’t recognize computer science as a graduation credit for math or science, and nine out of ten schools don’t teach programming. Only two percent of college graduates have a computer science degree.

How can that be? Look around you and everything you see is somehow connected to a computer or mobile device. We spend our days working and socializing on computers and devices, yet only two percent of college graduates have a computer science degree. To add to that, the Partovis estimate that in the next decade, there will be 1.4 million programming jobs. Who’s going to be working them?

To help with their mission, the brothers created a YouTube video and included some of the most recognizable names in the industry these days, Facebook’s Mark Zuckerberg and Microsoft’s Bill Gates. They’re joined by Chris Bosh of the Miami Heat, Jack Dorsey of Twitter and Square, Drew Houston of Dropbox, and even will.i.am. These names and the way they are explaining computer programming adds a coolness factor and will definitely have young people wanting to join those ranks. 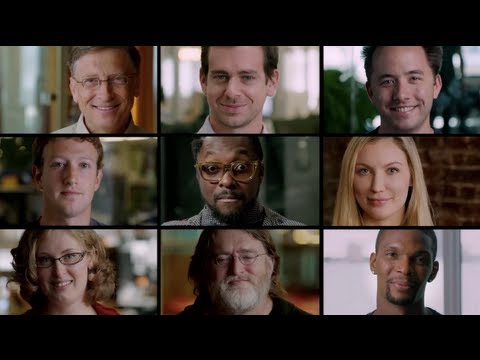 Yet, will this video push the education system into making some changes? I can say that my son was interested in studying engineering in high school and his first year of college. There was not much mention of computer programming, and this is only two or three years ago. The engineering push is on electrical and mechanical engineering. There is a slight push towards robotics, but that’s the closest he got to computer programming. Had someone pushed him in that direction or allowed him to see it as an option, he would probably still be an engineering student.

Hopefully the video will reach the intended audience. It’s disheartening to think that kids growing up in this age can spend every waking moment on their devices, yet not realize they could turn that into a career.

Let’s hear from some computer programmers out there. What do you think of this initiative utilizing Zuckerberg and Gates? How did you get interested in it if now in school? What’s the job market like for you?

How to Show Lunar/Moon Phases in Google Calendar

How to Pin Extensions to the Google Chrome Toolbar

How to Block Cookie Consent Pop-Ups in Your Browser

10 Disposable and Throwaway Email Providers You Can Try

The 15 Best Deep Web Search Engines to Find What Google Can’t
Spotify vs. Apple Music: Who Wins the Music War?
How to Pin Extensions to the Google Chrome Toolbar
How to Find and Use Instagram Reels Templates
How to Change the Country and Language in Amazon
How to View Instagram, Twitter, Facebook, and More Without an Account
What Are Decentralized VPNs? You Should Give Them a Try
AiDot 18-Month Cloud Service Review