This is a sponsored article and was made possible by ZENBRE. The actual contents and opinions are the sole views of the author who maintains editorial independence, even when a post is sponsored.

The ZENBRE Z8 Plus, is a high-quality, reliable Bluetooth speaker that’s happy to hit the road or take on the elements. With long battery life, stereo pairing, and a full, impactful sound thanks to a 20W amplifier, these speakers make an excellent run at the higher-end Bluetooth speakers available today. 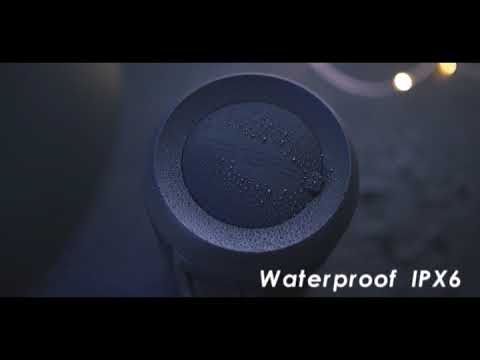 The sound is loud and room-filling, as would be expected from the 20 Watt amplifier that powers the speaker. There’s plenty of headroom on the volume knob, providing plenty of excess wattage to pump up your jams. The soundly is highly defined, with a clear, punchy treble that clearly transmits over ambient noise. Sound color is not as clear as higher-end speakers, but the audio quality is comfortably in line with other Bluetooth speakers of the same class.

The larger size of the ZENBRE works in its favor. With a larger device body, larger and louder speakers can be added. Higher-wattage amplifiers can be used. Bigger batteries can beef up the run time, and the authoritative weight of the ZENBRE speaker could probably knock you out. The bassier, louder sound also benefits from the higher-wattage amplifier included in these speakers when compared to less powerful but popular models.

The run time is satisfying, with the 6600 mAh battery providing 20 hours of listening. You can also use the speaker’s beefy battery as a power bank, connecting your mobile device to charge it from the speaker’s power stores. The speakers water resiliency, indicated in the IPX6 waterproof rating, makes the ZENBRE a decent candidate for a traveling speaker or just something to keep in your kitchen or bathroom.

While not completely waterproof when submerged, the speaker is protected from even the strong jets of water a shower produces. As described in the documentation for the IP rating: “Water projected in powerful jets (12.5 mm nozzle) against the enclosure from any direction shall have no harmful effects.”

Pairing is straightforward and fast. When you turn on the device, hold down the power button to enter pairing mode. This will allow you to select the speaker on your transmitting Bluetooth device, like your phone or PC. Once you’ve selected the device, you’ll get a verbal audio prompt to confirm the connection succeeded. Additionally, the device offers two preset equalization curves for subtly boosting bass and treble. While not terrible, it’s hard to see why we would prefer to cloud the recording with a pre-baked equalizer we can’t control.

As a sidebar, the audible Bluetooth status updates sound a lot like famed star of screen and speech J.K. Simmons, which makes pairing and unpairing the speaker a hilarious experience for me. I was more than once terrified to suddenly hear the voice of Portal 2’s combustible lemons booming through my kitchen, shouting “Power Off!” with a distinct sense of pleased assertiveness and mastery of his domain. For me, the speakers could probably power off silently without issue.

Audio sync when watching videos is good, better than with cheaper Bluetooth speakers. At least, it is when the video is played from start to finish. Pausing and resuming the video will often introduce a slight mismatch between the picture and sound. This is an old problem with Bluetooth. While some speakers handle it better than others, the Z8 was of average performance.

As explained in the translated manual, two ZENBRE speakers can work together as a pair to provide wireless stereo sound. By appearing as a single Bluetooth device with stereo sound capabilities, the speakers seamlessly translate your audio files into appropriately mixed stereo sound.

The sound quality is just as strong as individual speakers. Sometimes it does take a moment for the stereo algorithm to “catch up” to the first few seconds of audio play. It might be out of sync, echoing in one channel or temporarily mono. But once the wheels start turning, we successfully played stereo-heavy tracks with a fully-synchronized  stereo picture.

Overall, we were impressed with the ZENBRE Z8 Plus’s sound, build quality, and connectivity options.

How to Set Up and Manage Bluetooth Devices in Windows

How to Use Your Own Headphones for In-Flight Entertainment

The 8 Xbox Accessories You Can't Live Without

What is Bluetooth Used For? 7 Uses for the Wireless Technology

Which Roku Streaming Device Should I Buy?

Fitbit vs. Apple Watch: Which Is the Better Fitness Tracker Smartwatch?

Apple Pencil Essentials: How to Set Up, Use, and Troubleshoot

Five Ways to Prevent AirPods From Getting Lost or Stolen