Apple can always be counted on to make some newsworthy changes to their operating systems. Granted, sometimes they’re a little overdue, but they’re still newsworthy, be it to love them or loathe them.

The iOS fan that I am, they rarely make changes to their mobile platform that disappoint me, and the new iOS 11 falls right in line with that. I’m using the public beta as I always do, and so far I’m mightily impressed; however, it’s clear they still have a significant amount of major bugs to work out. But that’s obviously why it’s in “beta.”

I’ll go through the changes that are solely for the iPad first and will then go over the other changes that also concern the iPhone.

It’s like an all-new iPad, as Apple seems to be making a bigger and bigger gap between the tablet and the iPhone. Instead of just operating like a giant phone, it’s blazing its own path now, and at times it seems more like a laptop than a tablet.

Instead of just having a handful of apps in the bottom stationary row, you can now place thirteen apps down there. Additionally, the last three apps you opened are placed to the right of that. Just like the Mac dock, you can put folders in there.

You can now bring the dock up while inside an app by swiping up from the bottom. Just click on an app to launch it or drag it to the right side of the screen to open it in split screen. Additionally now you can also float the app over the top instead of in split screen, replacing the “slide over” feature. You can even open a third app to float on top of an already split screen. The floating app can be moved from left to right but “snaps” to either side.

If you swipe up a second time, you will find the app switcher screen. You can still reach it by double-clicking the home button as well. Now along with the opens apps, you also have the Control Center. Currently I have to “X” out of the apps to close them, but the just-released developer beta 3 changes this back to swiping up to close them. Additionally, if you were working with a side-by-side, that now appears in the App Switcher, somewhat like Spaces on macOS.

The Control Center is now customizable. You can add and delete some of the widgets. Instead of having to swipe to reach different widgets, they’re all right there to the side of the open apps. You can find out more about the control center options in Corbin’s How to Customize the iOS 11 Control Center on iPhone.

With all my favorite apps in the dock, I rarely have to go back to the home screen. My daily apps are all right there.

There are also several iOS changes that apply to both the iPhone and the iPad.

A definite plus to these iOS 11 changes is the new drag-and-drop feature. Admittedly, it’s something we’ve all been asking for for a long time on iOS. To have to copy and paste everything seems like a drag, pardon the pun.

But now, with apps native to iOS and some third-party apps as well, you can do a simple drag and drop. See the screen recording below, recorded, of course with that new feature, of drag and drop in its simplicity. 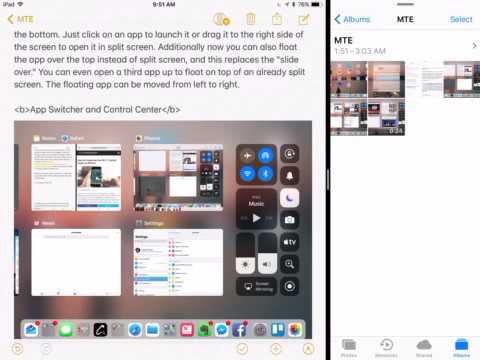 The process of taking a screenshot has a great new function to it. Instead of just adding the images to your Photos app, it places them in the lower left corner of your screen where they stay for a few minutes before disappearing into Photos. If you click on them here, you can edit the size and do markup, and then either save them to Photos or delete them from your device. I take a lot of screenshots, so I really like this feature.

Along with being in the screenshot edit, Markup is also an option when editing in the Photos app. Just click the three dots in the edit menu on the right to get there.

When you save a file to iCloud, it gets saved to this app. Additionally, there is integration with other cloud storage such as Google Drive, Dropbox, and Box.

But so far it isn’t working. The third-party apps don’t appear to be working with it yet, but the thought is that will certainly change before iOS is officially released. And making it worse, Apple has already included them.

This means if you save a file to Dropbox, you can access it in the app, but if you try to add it or open it from within another app, it only brings up iCloud. Additionally, you can’t add files to iCloud either. If you try to share to iCloud, whatever app you are using locks up on you.

Siri has a great addition to it. You can now type in it as well, just like you can with other personal assistants. This is great for times when it doesn’t hear you correctly. It heard “Make take easier,” when I was certainly saying, “Make tech easier.” I could have corrected it on my own, but it suggested that change for me.

Now instead of having to add apps or items into Messages to use them in conjunction with your texts, they’re all right there. If there are any apps on your system that work with Messages, they’ll appear in a row underneath the field where you type in your message. Clicking on them brings up the different things you could text, such as clicking on Evernote brought up my recent notes in Evernote. Like other new features, it’s also waiting for the third-party apps to catch up and make the changes.

There’s even an all-new reorganized App Store. The offered are now organized in a much more interesting manner, reminding me of a magazine-stye blog. Additionally, the offerings change every day, so there’s no more checking into the app store for days and days to see if there are new apps, just to find the same ones you found all week. They change every day.

As you can see, there are many, many changes, with all of them making the iPad not only better, but very much different from the iPhone which is also improved with the new iOS. We’ll have to wait for future OS rollouts to see what direction they’re moving in, but it certainly seems like, along with the iPad Pro, they’re trying to make the tablet experience more laptop-like.

Have you tried the Public Beta? What do you think? If you haven’t tried it yet, you can get set up for it here.