Many of the Quadcopters we see these days can only be used one way: in the air. However, the WLtoys Q353 Triphibian Quadcopter can be used in three ways: in the air, on the ground, and on water. If you’re looking to knock out three birds with one stone, this is the perfect gift for yourself, a child, or anyone else you may know who is interested in drones, RC cars, and RC boats.

The Q353 Quadcopter has a unique design that allows it to be used in three different ways, and it does so simply at the press of two buttons! It’s also 100% waterproof, so even if it happens to flip over in the water, it will be just fine. Here’s a closer look at this impressive Quadcopter.

Besides batteries for the remote control, the Q353 Quadcopter comes with everything you need to quickly start flying, driving, or boating.

Note: The AC adapter is the EURO version; a converter is needed for US outlets.

The Quadcopter comes with an advanced remote control which features a convenient LCD display. There are two joysticks along with numerous buttons and switches. As you can imagine, it’s pretty difficult to remember what each button does so it’s best to reference the manual’s detailed diagram until you get used to it.

Here’s a rundown of what each button is for:

The LCD screen displays the modes, speed, trims, battery level, and more. This quadcopter does not have a camera, so there is no mobile app available or needed; the remote control does everything you need.

Once the Quadcopter is charged up (this takes a couple hours) and you have your batteries in the remote control, you’re ready to fly. There is a power button on top of the waterproof cover which protects the charging area.

Also, remember to choose the correct mode on the remote (land, water, air) so that you can control the Quadcopter properly.

When driving on the ground, things get a little shaky due to the tiny wheels. They’re not the best quality but they do the job. You definitely want to make sure you’re using it on even ground and nothing that’s bumpy or rocky.

I also noticed that the Quadcopter constantly tries to rise, almost as if it wants to take off, making it harder to control on the ground.

When you active headless mode, the onboard flight computer always aligns the drone movements to be relative to the controller. So it does not matter which way the drone forward direction is pointing.

There are LEDs under each propeller that you can enable in low lit areas and at night – they’re hard to see in the daytime. The LEDs will also start to flash when the battery is low.

To charge up the Quadcopter, simply open the waterproof cover and connect the charger; it snaps right into place. A red LED will illuminate while it’s charging and go off when charging is complete.

In the video below, you can see how the Quadcopter performs on the ground, in the air, and even on water. 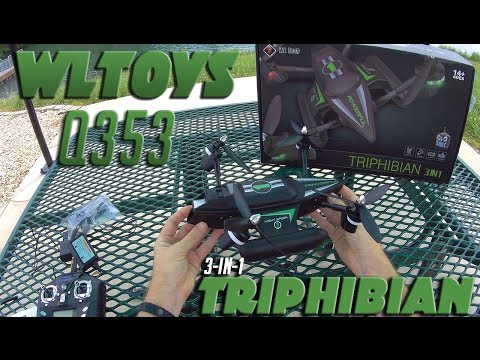 If you’re an outdoors person who wants a Quadcopter that’s different from the norm, you’ll definitely turn some heads with this triple threat.

While I wouldn’t recommend the Q353 Quadcopter for young children, it’s also sure to be a lot of fun for preteens and teenagers. It’s fairly easy to operate, and once you learn all of the controls, you’ll be a pro in no time.

How to Check the CPU Temperature in Windows 10

How to Access an Android Phone with a Broken Screen

How to Fix Broken Packages in Linux

What You Should Do If Windows 10 Fails to Start