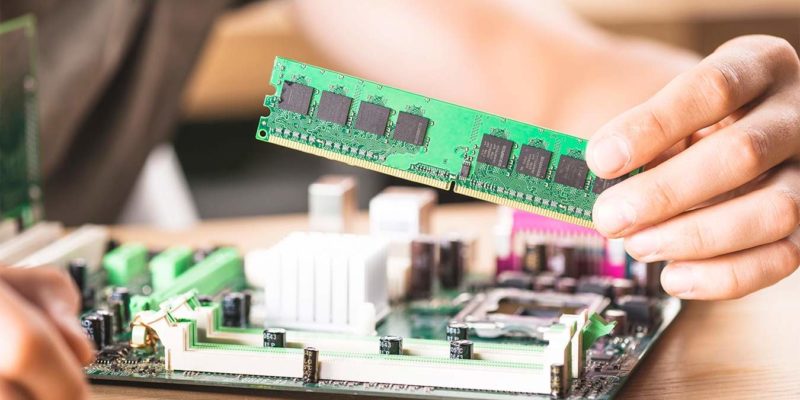 RAM is a core computer component, but we don’t talk about it much. If it doesn’t have rad heat spreader designs and RGB accessories, RAM rarely gets a day in the sun. The CPU sets the condition that the rest of your build operates under, but you can coax a little more speed out of your PC with faster RAM. Both clock speed and timing, or latency, determine your RAM’s speed.

Related: Buying Memory/RAM: What to Know

The speed of your RAM can be found on the box or the module through software like CPU-Z or within the BIOS/UEFI. The full name of your RAM module will be something like the following:

The DDR4 describes the generation of DDR the chip is compatible with. The same number (2, 3, or 4) appears in the PC number, describing the same thing.

The first four-digit number, 3200 in our example, is often said to show the RAM’s clock speed in megahertz. That’s actually a bit of a marketing fib, but don’t feel bad: the misunderstanding is directly encouraged by PC OEMs and retailers. That number actually reports the data rate, measured in megatransfers per second, or 106 data transfer operations per second.

The PC number, 25600 in our example, shows the transfer rate measured in megabytes per second (MB/s). By multiplying the data rate (in megatransfers) by the width of the I/O bus (64-bits in all modern motherboards), we can determine the maximum possible transfer rate:

Each number independently tells you how fast the RAM is. But both numbers provide the same information, just in different forms.

What Are RAM Timings?

Timings are another way of measuring RAM speed. The timings measure the latency between various common operations on a RAM chip. Latency is the delay between operations. It can be thought of as “waiting time.” The minimum timings are set by spec, so you can read a table of the fastest-possible RAM timings for each DDR specification.

We measure RAM timing in clock cycles. Retailers list timings as four numbers separated by dashes, like 16-18-18-38. Smaller numbers are faster. The order of the numbers tells you their meaning.

The time it takes for the memory to respond to the CPU is the CAS latency (CL). But CL cannot be considered in isolation. This formula converts CL timing into nanoseconds, which is based on the RAM’s transfer rate:

As a result, slower RAM can actually have lower actual latency if it has a shorter CL.

RAM modules use a grid-based design for addressing. The intersection of rows and column numbers indicates a particular memory address. Row address to column address delay (TRCD) measures the minimum latency between entering a new row in the memory and beginning to access columns within it. You can think of it as the time it takes the RAM to “get to” the address. The time it takes to receive the first bit from a previously inactive row is TRCD + CL.

Row Active Time (TRAS) measures the minimum amount of cycles a row must remain open to properly write data. Technically, it measures the latency between an activate command on a row and issuing the precharge command on that same row or the minimum time between opening and closing the row. For SDRAM modules, TRCD + CL calculates TRAS.

These latencies do limit the speed of your RAM. But RAM specifications set the limit, not physics. The memory controller that manages your RAM enforces these timings, meaning they’re tweakable (if the motherboard permits it). You may be able to get performance from your RAM by overclocking and tightening the timings by a couple of cycles.

RAM overclocking is the most temperamental of hardware overclocking techniques, requiring the most freezes and experimentation. But faster RAM shortens the processing time for RAM-bound workloads, improving rendering speed and virtual machine responsiveness.

How to Fix an Unformattable and Unusable USB Drive
USB Flash Drive vs. External HDD and SSD: Which Is Best for You?
How to Completely Reboot Your Home Network to Fix Network Glitches
How to Speed Up Your Printer and Make the Printing Process More Efficient
How to Upgrade Your Hard Drive to SSD
Why Does My TV Say No Signal? A Quick Troubleshooting Guide
How to Choose a Gaming Monitor
How to Check the Power Output of USB Ports