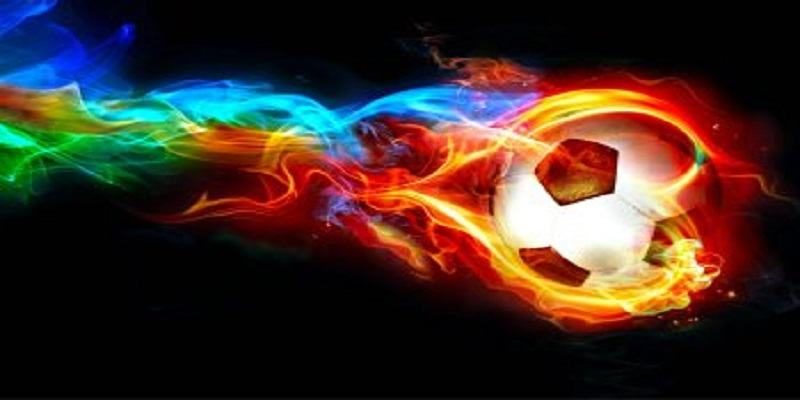 If you don’t have cable TV, perhaps you’re wondering just how much of the World Cup you’re missing! For many, catching the games on television isn’t their first choice. If, for whatever reason, you’re looking for live streaming online, here are a few great outlets where you can be sure of uninterrupted, quality viewing.

Most are simply great sports portals for long-term viewing, and many have a special focus on the World Cup right now. There are dozens of sports streaming sites, and between them all users will find particular focus on certain sports or programming they enjoy. The five options listed below are a small snapshot of diversity for those wanting a constant stream from the World Cup matches.

In a nutshell, and in the midst of a bit of a “streaming boom” right now, Fubo TV is basically almost all of cable on your phone for a lot less. Billed as a kind of “Internet cable” alternative, most of the major cable networks and major channels are available far cheaper than paying for cable TV.

Sports fans particularly have swollen the user base as Fubo is one of the best options to watch streaming sports. While some portals are very local in focus, Fubo TV offers a great diversity of local and international channels streamed live. That said, there is a strong platform of more than thirty channels that form the basic offering. It’s simply trading on immediate, familiar options as upon login, users can access NBC and Fox, for example. Both of these are suitable channels where you can catch every World Cup game live.

Since they’re not too shy to charge for their service, a very welcome option is that users can experience it on a trial basis for free for seven days before making a final decision.

A different take on things comes from YouTube, the video platform that has become the default destination for millions of daily users. It not only includes individual posts, but also celebrity posts, and YouTube “channels” that receive much publicity on a constant basis.

It’s been a logical step to move from current content to offering live programming. This is what YouTubeTV is all about. Frequent users will note the emergence of YouTubeTV as logically stemming from the original platform’s aims and also from YouTube Red. It’s very much like Fubo TV and others like Hulu Live. The biggest matches of the week from the Soccer World Cup are easy pickings. The added benefit of not being tied into a contract appeals to many. 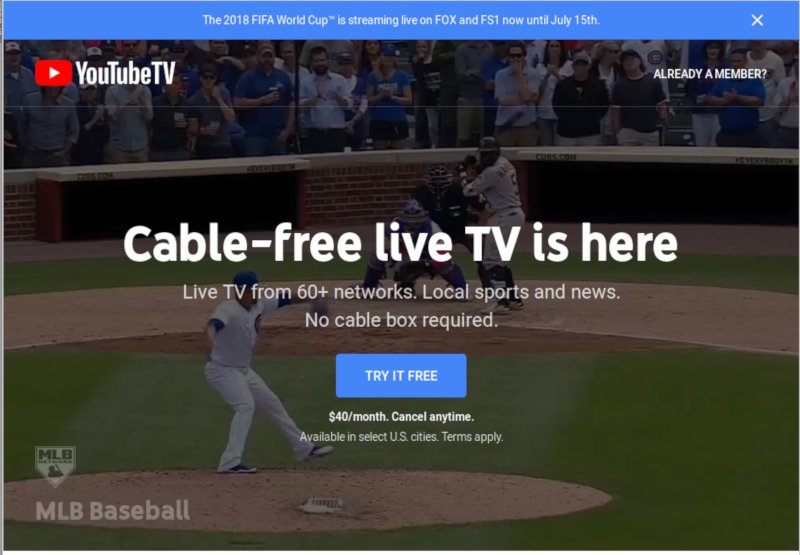 YouTubeTV allows users to hone in on a specific sporting season and cancel after their sought-after games have ended. On par with many competitors, users can use YouTubeTV on a trial basis for seven days before committing.

The downside is a fairly limited offering in comparison to other platforms. Service providers like Hulu Live and Fubo TV are currently ahead of YouTubeTV. Many users are simply loyal to the platform as a whole, but for the average sports fan, the bouquet may be too limited. with regards to fees, YouTubeTV comes is on par with Fubo TV and other far more extensive offers.

This is another great option to catch the games. Indeed, for many loyal to Hulu, they see no need to look for sports streaming elsewhere. The original Hulu grew on the back of airing network shows the day after, eventually developing their own series. That original offer didn’t hold much for sports fans, but Hulu Live fleshes it out. 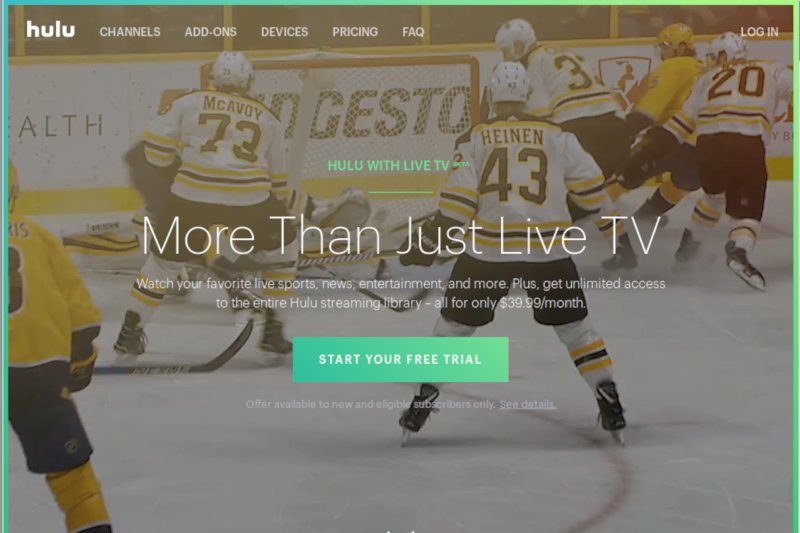 Users can upgrade from the basic $7.99 offer or simply sign up for Hulu Live to gain great access to the majority of the major networks. Besides CBS, Fox, NBC and all of their sports channels, there are some local channels as well. Users can view via their mobile device on any streaming platform.

The Hulu offer sees channels and networks sorted by genre, enabling users to find group matches in the World Cup. It facilitates navigation and replays like few other platforms. For general users, the fact that they don’t get quite as many local channels as offered elsewhere tends to be traded for a great movie selection.

Another route many might not have considered is via Sony’s PlayStation. Not just competing against Xbox and Nintendo in the gaming arena, Sony has over the last few years been sampling user uptake of a variety of new services. One upshot of this is that the company now has a viable, competitive option for streaming television.

Playstation Vue serves up local and national networks without the need for a cable decoder box. They are offering a great experience of the Soccer World Cup. While it offers a step-by-step nature, its prices are among the top end. Users can move up along four different tiers that enhance the offering with each step up. The top-tier choice grants access to ShowTime and HBO. 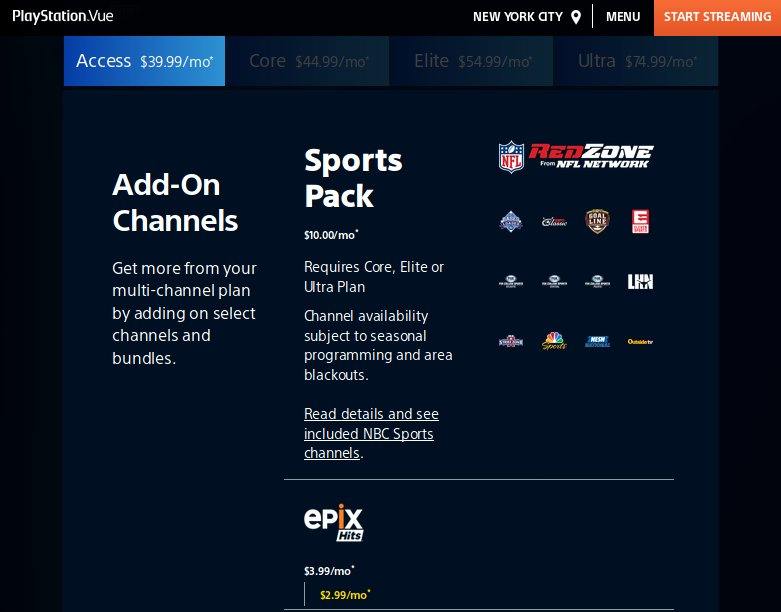 For sports fans, this means that everything out there is potentially available. While it might seem pricey, it can come in considerably less than a cable contract.

Something of a reigning monarch of sports coverage, ESPN has been dominating sports in the US market since 1979. Their 24/7 coverage of all professional US sports has grown to include sports events from across the globe as well as a constantly expanding list of peripheral interest shows.

Looking at the price, the ESPN offer represents a whole lot for comparatively little. The sheer variety and intensity of coverage is what makes ESPN worthwhile. Users can flit through a massive array of constant event programming, all the while with related interest shows on offer, too. 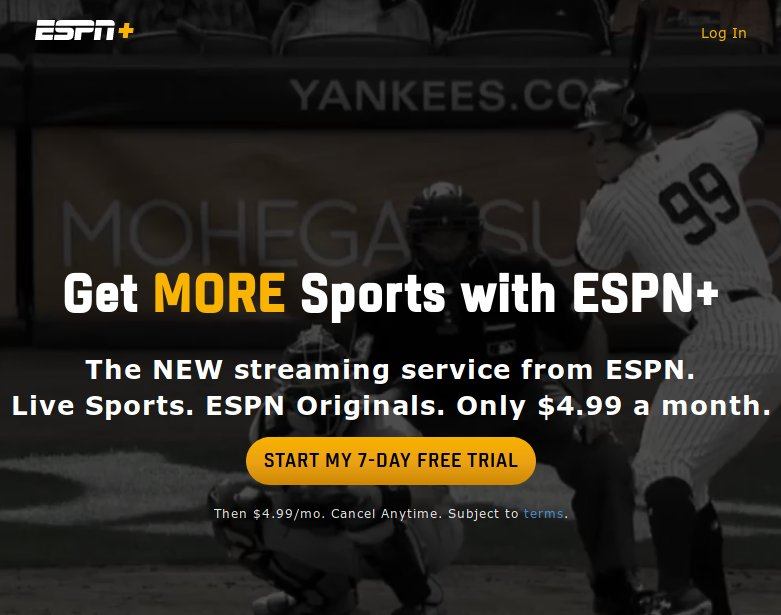 Although the portal misses the occasional big match, ESPN is like the baseline sports option for a generation, and whatever you don’t find here is capably compensated for in the abundance of constant content. Catching the games of the current World Cup is easy enough here, as a dedicated sports focus is a given with ESPN+.

There are probably many other online sources that we have not covered here. Do let us know if you come across any that are not mentioned here.