Since the early days of the Internet, videos have been a big part of online entertainment. Websites such as YouTube make sharing and watching videos easy for everyone to do. The digital format also allows developers to create features that traditional media could never achieve, from automatic captioning to quality controls. One of the more recent innovations in digital video is the ability for users to watch 360 video files where viewers can take control of the camera within the video and look around as they watch.

To achieve this, a video is recorded by a camera that captures video from all angles. When it’s uploaded and viewed in a player that supports 360 functionality, users watching the video can move the camera around to look at different spots. Even better, if you use a VR headset and compatible software, you can wear it while watching a 360 video and look around as if you were actually there!

So, if you’re interested in watching these videos, what options do you have if you’re using Windows 10?

This is the easiest solution as it involves no third party downloads whatsoever. If your browser has hardware acceleration enabled, you can watch 360 video clips online using online players that support it. For instance, if you’ve always wanted to go on a roller coaster, but the idea of it turns your stomach, someone has recorded a video of one and uploaded it to YouTube. 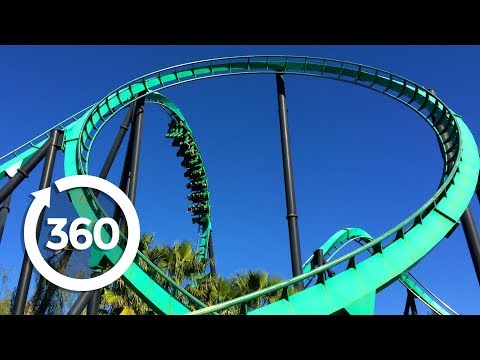 The more calm and relaxed types may want to watch a gondola ride, while the animal enthusiast may enjoy watching elephants. It’s a great way to see what 360 video is all about without having to buy or install anything new.

Video 360 is a paid app you can get in the Windows Store. While it comes with a price tag, it comes bundled with some very nice features. You can search and watch 360 video within the app, and it’s compatible with 360 photographs, too.

It also supports 3D VR headsets, which is great if you want to physically look around as you watch. If you’re not one for headsets, Video 360 comes with some great features for basic watching. If you’re watching it on a mobile device with accelerometers, you can use them to change the camera around. Otherwise, you can use a mouse, keyboard, and even an Xbox controller to rotate the camera.

If you don’t feel like putting down money for a 360 player, BIVROST is free, easy to install, and great for watching 360 videos. While it’s still in beta, it’s still a very functional video player that isn’t inundated with confusing features. If you want to watch a 360 video, whether it’s one you’ve found online or downloaded as a file, you can easily load it up in BIVROST and have it play right away.

BIVROST’s forte is its compatibility with VR headsets, and it’s meant to be used while wearing one. Even if you don’t own a headset, however, you can pan around the video using your mouse. This makes BIVROST an elegant solution if you want to watch a 360 video within a proper video player.

GOM Player is another free-of-charge option for 360 videos. While it can support and play regular video files, it’s also equipped with the capability to play 360 videos. It comes with a built-in 360 video searcher, so if you find a particularly good-looking video on YouTube, you can feed it into GOM Player and watch it there instead. You can also use it to watch 360 video files you’ve downloaded or recorded.

A word of warning, however; while GOM Player is a great way to watch 360 video files, many users have reported that it tries to sneak in free software during its installation. If you want to use GOM Player, be very careful as you install it, and make sure you customise the installation to not install software you’d rather be without.

Perhaps a surprising entry on this list, VLC has made the push to support 360 videos and photographs. It’s still in testing, but if you’re interested you can download a technical preview on this website. At the moment, it doesn’t support VR headsets, but it can be used with a keyboard and mouse instead. If you’re not keen on experimental software, you can wait until V3.0 of the player which will natively support 360 video.

With the world shifting into digital video, more features are being added to make them even more engaging. 360 videos can be great with a VR headset, on a tablet, or just a keyboard and mouse. If you want to try them out, now you know the best options for you out there.

Are you a 360 video aficionado? If so, what are your gadgets of choice? Let us know in the comments.

How to Set Up Port Forwarding in Windows 10