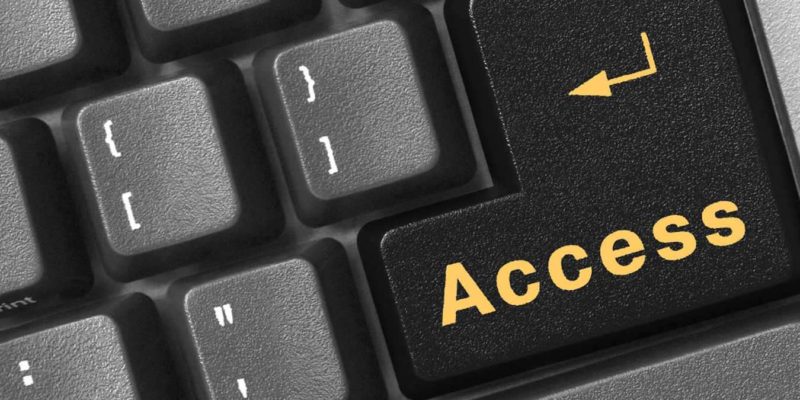 A very useful feature in Linux is the “Access Control Lists” which controls access to files and directories. Here is how the access control lists work to control the file permissions in Linux.

Note: To thoroughly grasp how access control lists work, we’re first setting up some users and groups on a working Linux system. The following exercise is carried out on a virtual machine running Kali operating system. The root user has the power to add new users to the system and allot them to groups.

Firstly, we will log in as root, create users and put them in respective groups as shown in the table below. The users have been given simple names to help comprehend the concept better.

We will use the adduser command to add new users to the system. 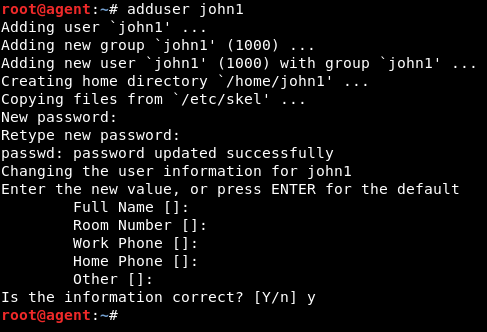 The id command will display the details of the newly created user. It will show the user id (uid), group id (gid) and group name (groups). The user, upon creation, is automatically added to a group with the same name as the user name. That user would be the sole member of the group.

Once the three users have been created, use theid command to view the respective user and group ids.

We can see that the three users are in their own groups – 1000, 1001 and 1002. According to the table shown earlier, we want the three users to be in the same group: johns. Since such a group does not exist on the system currently, we will create it with the groupadd command:

The new group ID is specified as 5000. If the -g switch is ignored, then the system will automatically pick a group ID. The name of the new group is “johns.” Now the three users – “john1,” “john2” and “john3” – need to be added as members of this group. We will use the usermod command for this task.

usermod adds the user “user_name” to the group “group_name.” The following figure first displays the uid and gid for “john1” before group change. After the usermod command runs successfully, “john1” is added to the “johns” group with gid 5000.

The same process is done for users “john2” and “john3.”

Finally, details of the three users in the “johns” group can be viewed using id command.

We have successfully created three users and added them to the same group.

Similarly, users “jane1” and “jane2” are created and added to the “janes” group with gid 6000. Their details can be viewed using the id command as shown below.

creates a new file in the Home directory,

The first few characters in the output, - rw - r - - r - - account for the permission string. Let us dissect it.

This article is a good primer on file permissions.

What if “john1,” being the file owner, wants to additionally give write permissions only to “john2” and “jane1” but persist with read permissions for “john3” and “jane2?”

Instead, an “Access Control List” can be created for a file which would clearly state the operations any user can perform on that file.

Every file upon creation has an ACL assigned to it. Using it efficiently is simply a matter of modifying it. Only the file owner and root user can modify the ACL of a file.

We can use the getfacl command to view the existing ACL: 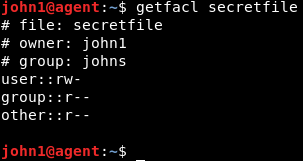 Let us use the setfaclcommand to modify the existing ACL on the file.

“john2” is first given read, write access to the file,

Let us view the updated ACL for “secretfile.” 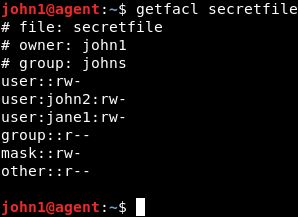 We can see that read and write permissions have been assigned to “john2” and “jane1.”

Verifying the authenticity of the ACL

We can see that “john2” is able to read the file and write to it.

The new information entered by “john2” has been appended to the file.

But “john3” in the same group is unable to write to the file.

“jane2,” who belongs to the other category, is also unable to write to the file.

The same process can be extended to directories, too. Access Control Lists enable a system administrator to handle file and directory access in an adept manner.