Gimp users, rejoice! After 3.5 years of development, Gimp 2.8 has finally arrived. This version of Gimp brings a plethora of changes and improvement, making Gimp a even better image editing software than its previous version.

All previous versions of Gimp come with separate windows for the toolbar, main window and various dock dialogs. Some love it as it allows them to micro-manage, but some hate it and yearn for a Photoshop-like interface. In Gimp 2.8, the default interface is still the separate window mode, but you can get it to show the Single Window mode by selecting the “Windows -> Single-Window Mode” option. 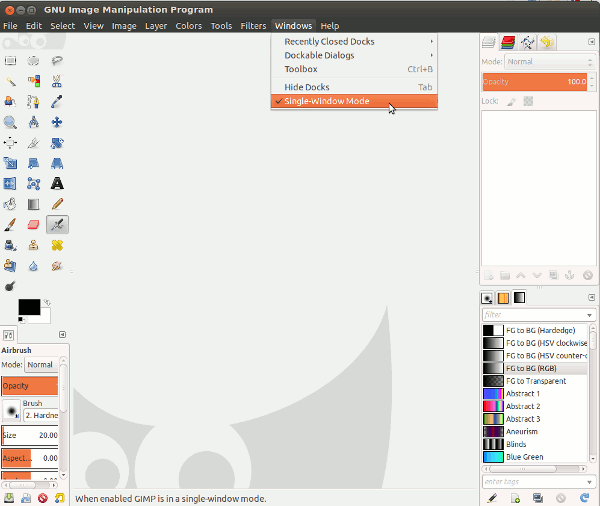 Gimp users with a Photoshop background will love this. In Gimp 2.8, you can organize your layers into group. Layer groups are also fully scriptable, making it easier and faster for you to get things done.

This is one feature that I love most. In previous version of Gimp, the text-editing feature always open in a new window, making it very troublesome to handle. The on-canvas text editing in Gimp 2.8 allows you to make changes on the canvas itself.

While resizing an image, you can now use simple Maths as the input size. For example, rather than calculating half of 768px, you can now input “0.5*768” into the width/height field. You can also input “30%” in the field without having to change the unit from “px” to “percent”.

For more changes, refer to the complete Gimp changelog.

Ubuntu 12.04 is still running Gimp 2.6. For those of you who can’t wait for Ubuntu to include Gimp 2.8 in the repository, you can upgrade to Gimp 2.8 via the following method:

1. Uninstall Gimp from your system:

Configuring plug-ins and scripts for Gimp 2.8

Updated: The “gimp-plugin-registry” package has been updated to work with Gimp 2.8. The instruction below is no longer necessary.

The “gimp-plugin-registry” package in the repository is not compatible with Gimp 2.8, so if you are using plenty of plug-ins, you won’t be able to install them via the “gimp-plugin-registry” package. The only way is to manually install the plugins (until the plugin registry package is updated). Most of the scripts should continue to work though. I place the “arrow.scm” script in the “.gimp-2.8/scripts” folder and it works perfectly.

Here is how I install the “Save for Web” plugin:

3. Open a terminal and type:

If everything goes smoothly, you should be able to use the “Save for Web” feature in Gimp 2.8 now.

Zorin OS 15.1 Review
How to Format a Hard Drive to NTFS in Linux
Basic Bash Commands for Linux Newbies
How to Set the Terminal as a Transparent Wallpaper in Kubuntu
How to Completely Delete a File in Linux
Three Ways to Play Windows Games on Linux
Thirteen Useful Tools for Working with Text on the Command Line
How to Schedule and Automate Tasks with Crontab in Ubuntu