People who have browsed the web for an extended amount of time are familiar with advertisements which are usually used to drive a site’s revenue, including this one’s. What some people may not know is that most advertisements can be blocked entirely using various adblocking extensions.

For those who don’t know, an Adblocker can turn your favorite webpage from this: 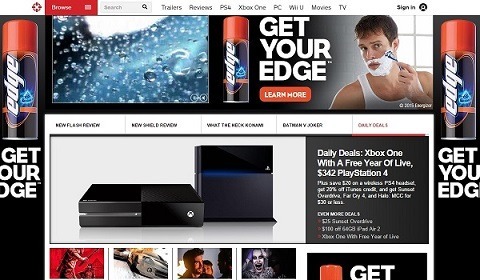 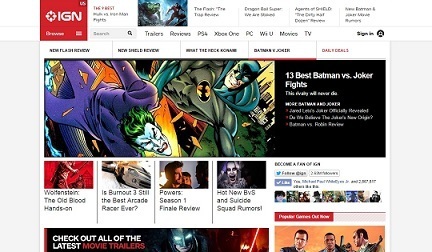 The most popular ad-blocking extension on Chrome and FireFox is AdBlock Plus, named as such as a competitor to the unrelated AdBlock has since fallen into obscurity and a messy development cycle. AdBlock Plus blocks all matter of advertisements on most websites and is widely adopted enough to even be compatible with most advertisements in plugins, like video players on YouTube and various other websites.

AdBlock Plus isn’t without its flaws, however. By default, it won’t block certain advertisements from Google, Microsoft, and other big companies because they’ve paid for the privilege to have some of their ads remain unblocked. Smaller websites with non-intrusive advertising apply for being on AdBlock Plus’ whitelist by default as well. AdBlock Plus is also known to be demanding on older machines, requiring a decent amount of processing power and memory that multiplies the more browser tabs and advertisements are being blocked.

Today let’s talk about a lesser-known adblocker that performs just as well as ABP and all the big boys, but without being in anybody’s pockets, with less than half of the performance requirements and, perhaps most importantly, without the hidden interests to compromise the experience.

This adblocker is called uBlock Origin.

With introductions out of the way, let’s start actually comparing the two.

The on-page interface for both plugins provides an easy button to enable or disable adblocking on the website you’re on. 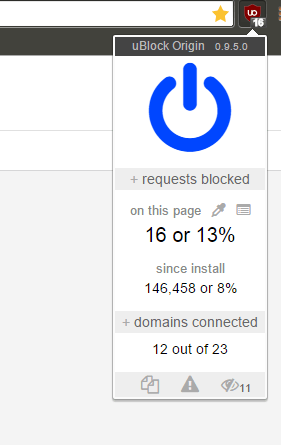 uBlock Origin’s on-page interface is minimal, only giving the adblocking toggle and some stats. The icons around allow the user to inspect page elements and list request logs, but for the most part these functions are extraneous and of no use to the common user. 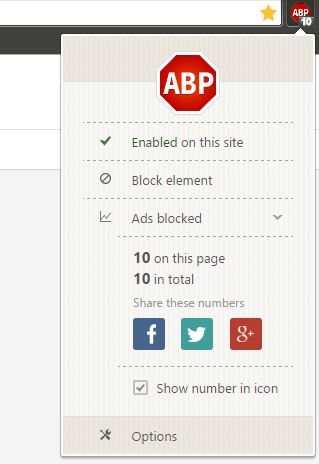 AdBlock Plus’ interface is notably larger, but gives more detail by default and provides sharing options should you want them.

Advanced users may prefer quick access to uBlock Origin’s advanced tools, but casual users may prefer AdBlock’s more simple set of functions. There’s not too much detail to go into here – while these are the parts of the adblockers you’ll most likely be acquainted with, they also don’t actually give you much in the way of the program’s greater functions. For that, we’ll have to go into their respective Options menus. 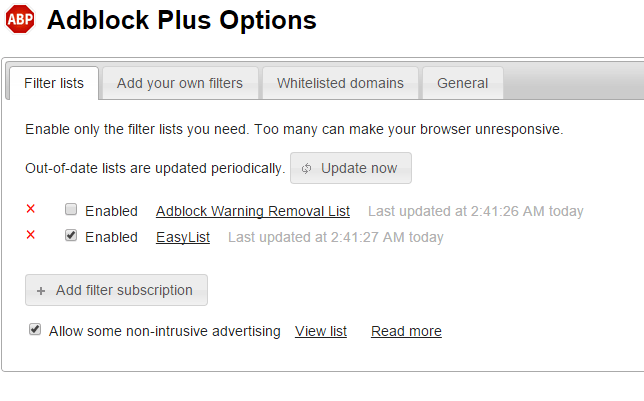 AdBlock Plus provides a simple set of options based around filters, whitelists and whether or not their main button appears on every web page you’re on. AdBlock uses just one Filter list by default, though more can be added at the user’s whim.

Of additional note is the “Allow some non-intrusive advertising” button – remember what I said about Google and Amazon paying to get their ads through AdBlock Plus earlier in the article. This is how they get their way through. If you uncheck this box, however, their ads will be completely blocked as well. 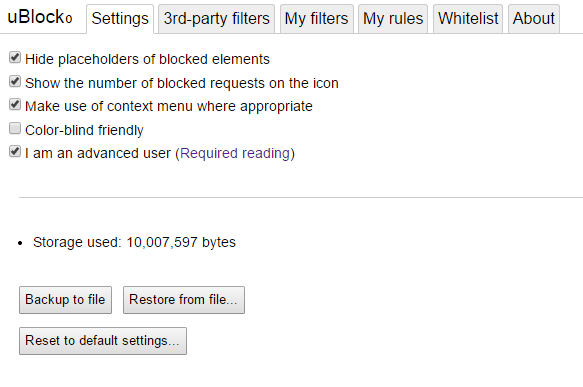 Right away, it becomes apparent that uBlock Origin provides a greater set of customization, including the ability to block advertisement placeholders that can be spotted around the web by AdBlock Plus users. uBlock Origin remains independent, so there’s no option for paid advertisements to sneak their way through here.

In addition to adding filters and rules, uBlock Origin provides a large list of 3rd-party filters (called filter subscriptions by ABP) and has more of them enabled by default. 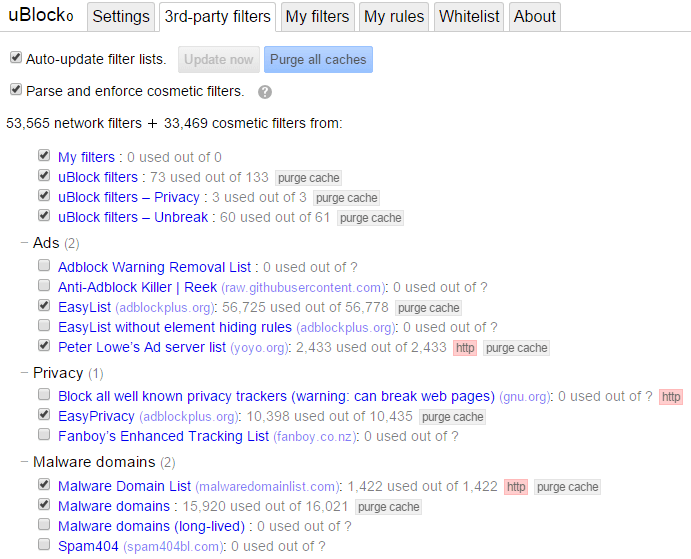 In closing, there isn’t a great difference between the two. Despite uBlock Origin having greater customization capabilities and using less system resources, AdBlock Plus is still perfectly fine at what it does.

If, however, you decide that you’d like a more powerful adblockerr, or if the one you have is using up too much of your precious processing power, consider making the switch.

If you are a uBlock Origin user, tell us more about it in the comments below.