If you are using a Linux-based operating system, chances are you have only two kinds of text editing tools on it: a basic text editor, like gedit, and a more powerful writing suite, like LibreOffice’s Writer. Such a setup is more than enough in most cases, but if you are a writer, you might need something in between in order to produce your work under a light and distraction-free environment.

There are several options available, some of which have already been covered here on Make Tech Easier, but today I bring you a distinct software. UberWriter, developed by a bright 21-year-old Swiss student, is a very light, simple and minimal tool for writing beautiful documents using the Markdown syntax.

Surely you have heard about “Markdown” before, but maybe you do not know what it is, so a quick explanation follows.

Markdown is a plain text formatting syntax design, excellent for a quick HTML conversion using a tool supporting it. It is mostly used as a format for readme files, writing messages for online discussion boards (Reddit, for example) or in text editing for the creation of rich text documents.

It was created back in 2004 by John Gruber and Aaron Swartz and aimed to allow people “to write using an easy-to-read, easy-to-write plain text format, and optionally convert it to structurally valid XHTML (or HTML)”.

UberWriter is a program for text editing based on the Markdown syntax. It is available in the Ubuntu Software Center, and costs $5 if you download it from there. However, if you prefer to download UberWriter for free, you can do so through a PPA, using the following commands in a terminal window (Vollprecht explains this “paid/non paid” thing in his blog):

After the installation is finished, UberWriter can be found under the “Office” section of the application menu. Contrary to what happens with many other applications, in UberWriter’s first run there is no setting up whatsoever – in fact, the software doesn’t even have a “preferences” menu, which helps to keep it as simple as possible.

Actually, the whole interface is quite minimal. The default skin brings a white background with some small horizontal lines and a dark font, but under “Dark Mode” (View -> Dark Mode) there is an inversion with a dark background and a white font. There is also the possibility of working in fullscreen, and a “Focus Mode” that highlights the sentence you are writing for a “typewriter-like” feel. In the bottom bar you can also find word and character count.

UberWriter also has a very interesting feature: Whenever you use any Markdown syntax, the program highlights it and gives you a slight preview of the action. To understand what I mean, notice the Markdown tags I used in the screenshot above and take a look at this screencast: 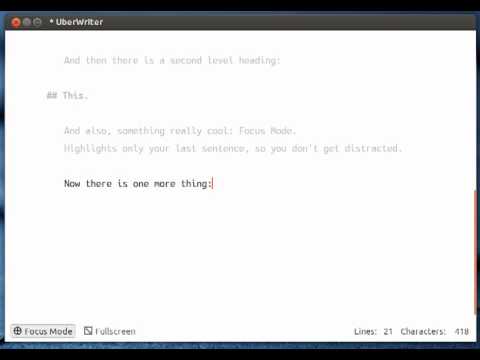 However, as far as I know, this highlight has no action for links (as you can also see in my screenshot).

Unlike similar apps using Markdown, UberWriter uses a “single-window” mode, which means that you can only fully preview your writing if you export the document to another format. HTML, PDF and ODT are the main exporting formats, but users can also use an “advance exportation” feature to refine the exportation parameters. There is also an option to copy raw HTML to the clipboard.

Whether you are an expert in the Markdown syntax or a beginner wanting to learn more about it, UberWriter is the right app for you. It is simple, lightweight and straight to the point, allowing you to use Markdown at will and export your text to the most widely used output formats.

Give UberWriter a try and let us know your thoughts in the comments.

Diogo (@diogocostaweb) is a Biologist with a grip on computers and technology. Running Windows systems all his life, has a big interest in discovering new apps that increase productivity or simply make things more interesting. He lives in Portugal and has photography and music as main hobbies. He is also the author of the page techkern.tk, a page for short (but useful) computer tweaks and tutorials.

How to Set Up a VNC Server In Ubuntu

7 Ways to Speed up Ubuntu

How to Change the Screen Resolution in Ubuntu