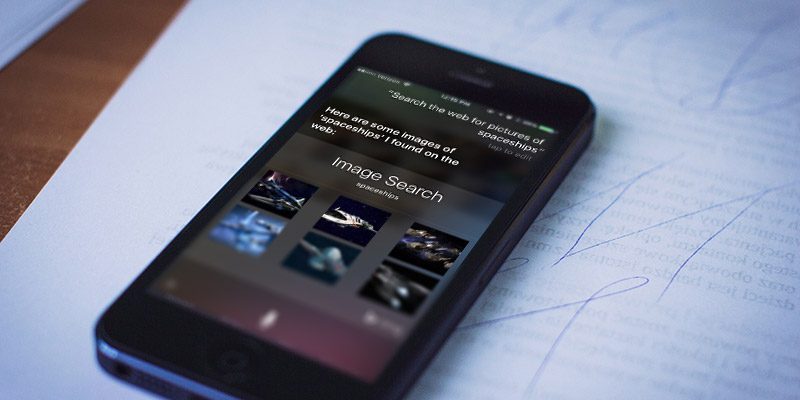 Apple’s digital assistant is one of the company’s more limited offerings. While she’s not as powerful as competitors like Google Assistant, Siri’s abilities have improved over time. There are some tasks that are actually easier with Siri than without. Here are a few good reasons to actually use Siri. 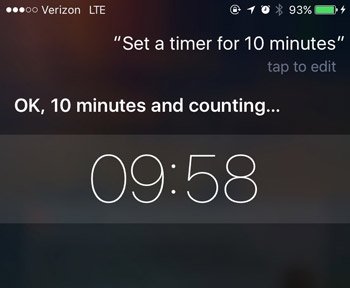 I don’t use Siri all the time, but when I do, I’m setting a timer. Activate Siri and say “Set a timer for 10 minutes,” and Siri will automatically start the countdown. Excellent for cooking. 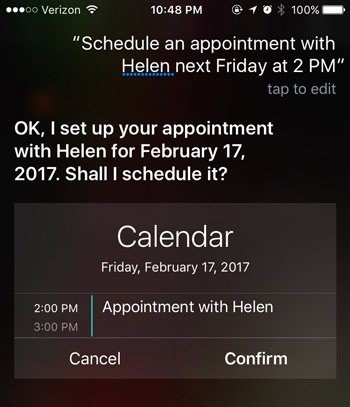 You can take advantage of Siri’s natural language processing to quickly add events to your calendar. “Schedule an appointment with Helen next Friday at 2 PM” will create that calendar event. It will also scan your contacts for anyone named Helen and link them to the event, if found. This is more elegant than using the built-in calendar app and faster to boot. 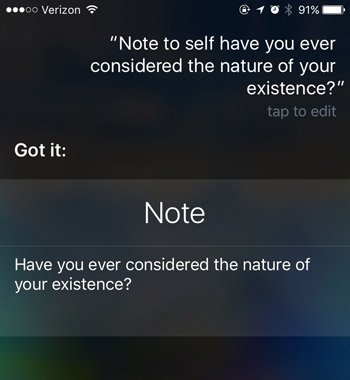 I tend to get a lot of ideas while I’m driving, but that’s not really a situation where pen and paper is easily accessible. I use Siri to take notes instead. The voice trigger for this command is fairly flexible. Start with something like “Note to self…” or “Make a note…” and Siri will create a new item in Notes containing whatever you say afterwards. 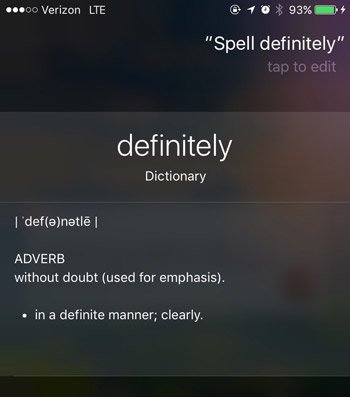 Pronouncing a word and spelling a word are two bits of knowledge that are only loosely related. Rather than typing incorrect permutations and hoping AutoCorrect catches your meaning, check the spelling through Siri. Just say “Spell definitely,” for example, and Siri will reply with a text box showing the word. She’ll also spell it out loud, which could be embarrassing or helpful, depending on your location. 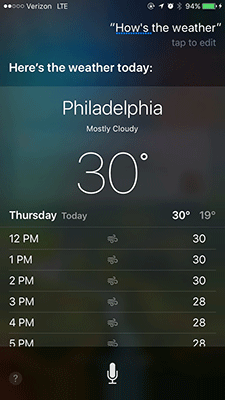 Get quick weather updates through Siri’s voice commands. You can trigger this one with a wide variety of voice commands, from a conversational “How’s the weather?” to a more direct “What’s the temperature?” Either way, you’ll get a quick summary of current conditions by voice. You can also check the screen for the day’s hourly forecast. 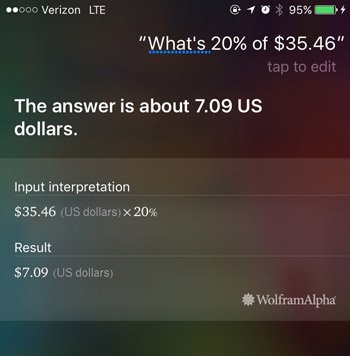 Ask Siri “What’s 20% of thirty-five dollars and forty-six cents?” and she’ll reply with the correct answer, $7.09. This is especially useful if you forget how to calculate percentages after you’ve had a few drinks. 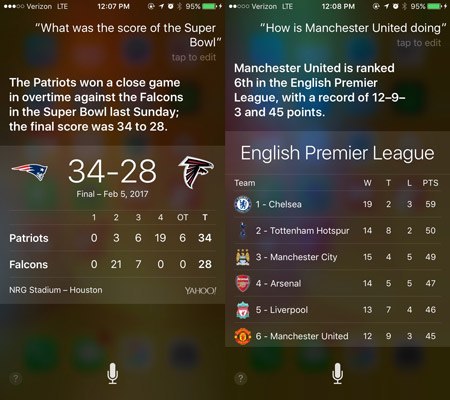 There’s a very specific set of structured data that Siri can fetch, and sports stats are almost perfectly suited for that ability. Ask “What was the score of the Super Bowl?” to get a quick voice summary and a more detailed info box. You can also get a more complete picture by asking something like, “How’s Manchester United doing?” As you can see, the correct answer to the second question is “poorly.” 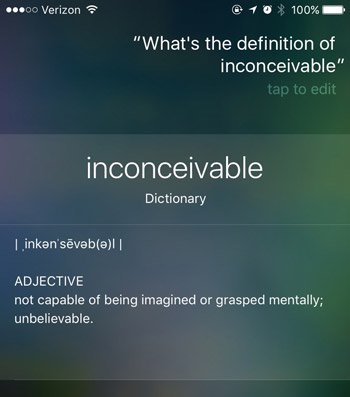 You can also use Siri to find the definition of words. Say “What’s the definition of inconceivable?” and Siri will reply verbally. This might be another context-dependent usage, but it’s great for words you’ve heard spoken but don’t know how to spell.

9. Search Your Own Photos 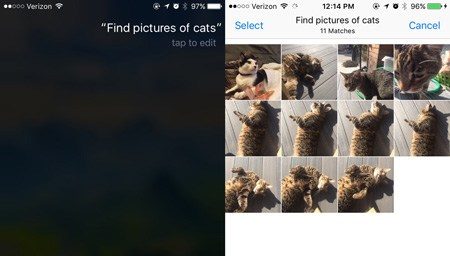 While Siri’s strongest suit might be web-based querying, that’s not all she can do. You can also search your phone’s own photos using Siri. Say “Find pictures of cats” to see all the photos of cats that you’ve taken. It’s not guaranteed to get every image of cats, but it does a decent job. 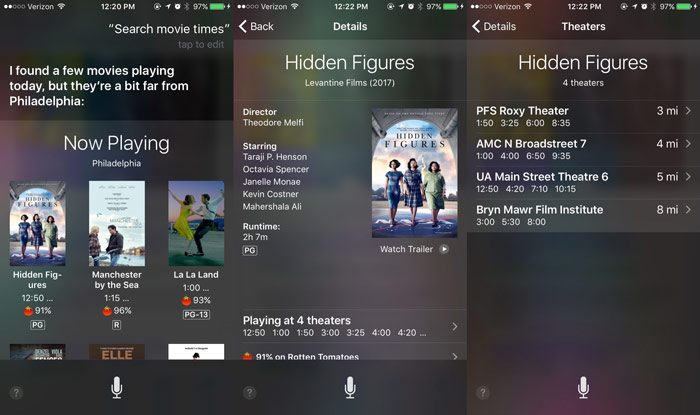 Say “Search movie times” to see a list of the movies that are currently playing nearby. The well-organized UI for this information is the most valuable part since it makes it easy to see what movies are out now and if they’re any good. Tap on a movie’s poster image to see a description, and then tap “Playing at…” to see the list of theaters current showing the film. 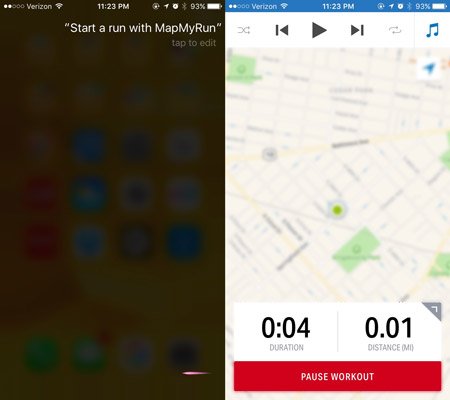 Thanks to the third-party integrations that Apple added in iOS 10, Siri can now trigger events in non-Apple apps. One of the most useful integrations is starting a workout. Just say “Start a run with MapMyRun” to begin tracking your workout. This will also work with Runtastic, Zova, and Nike+. 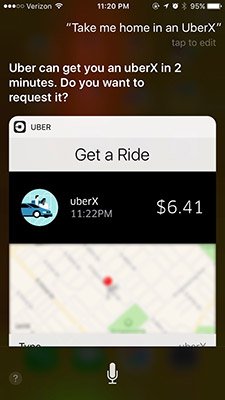 Catch a ride with Siri’s third-party Uber and Lyft integration. Say “Take me home in an UberX,” for example, and Siri will generate a request matching those parameters. Confirm the request, and wait for your ride.

Siri has not yet reached the level of an all-purpose digital assistant, but she’s getting there. Take the time to experiment with what she can do: you might just be surprised at how helpful she can be.