Conventionally, if you want to test Windows 8 applications, you will have to buy a tablet that runs the operating system. This extra expense is just something that might bother you, especially if you don’t plan to use the tablet heavily. To test a simple app and get it out there on the market, or simply to run Windows 8 on your iPad, you don’t have to do all that. Why not run Splashtop’s Win 8 testbed app?

The app will work much like how Windows’ Remote Desktop works, streaming the interface itself from a computer via WiFi or any other Internet connection. Just install Windows 8 on a computer, set up Splashtop, and stream away! The app’s ability to work smoothly is only limited to what equipment you have. This is most useful if you have high-speed Internet and WiFi hooked up to the computer.

Who Could Use This?

App developers are very prone to having to spend tons of money in something they’re not sure will be worth it in the end. We don’t really know how popular or effective Windows 8 tablets will be in the future, which is why many developers are currently afraid of taking the plunge. Microsoft currently pays developers to make apps for some of its platforms, but why should you really purchase a brand new tablet just for that incentive? Splashtop is a money-saving tool in the end, which can let you test Microsoft’s Windows 8 tablet platform without having to make any major investment.

And who said that Splashtop’s platform is useful only for developers? This application helps you get the best of both worlds, with the ability to run both Windows 8 and iOS apps! You’ll never have to miss out on what Microsoft comes up with while you’re using Apple’s tablets.

If you do not have WiFi in your home, or at least high-speed upstream on your computer (to connect via HSDPA or LTE), then you should not expect this app to work correctly. The app will have high latency in slower connections. In a high-latency environment, you’ll only be annoyed by the slow speed at which the system operates. Consider this before getting Splashtop’s Win 8 Metro Testbed.

Consider also that Windows 8 isn’t final yet. The consumer preview will expire on January 15, 2013. Since nothing is permanent, be sure that you get your hands on a permanent copy of Windows 8 by then. Otherwise, you’ll end up with an installation of Windows 8 that one day will just stop working. The Win 8 Metro Testbed is a great piece of software, but it’s not a magician.

Interestingly enough, the system is rather powerful and integrates every feature of Windows 8, particularly because it just streams the interface from another computer. You’ll feel like if you would be using a Microsoft tablet and forget about the fact you’re running Apple’s iOS. Here’s a video to show you how the system performs: 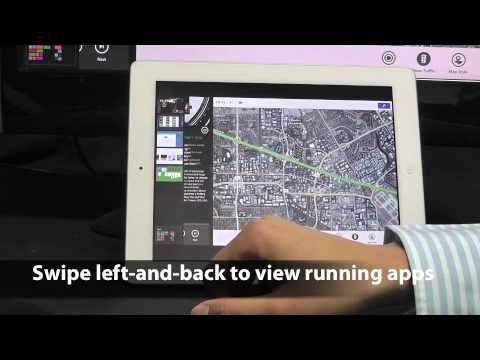 How to Set It Up

Ready to get a fully-integrated Windows 8 experience on your iPad? Follow the steps below to get there!

Once authenticated, you will have a remote Windows 8 interface.

Splashtop has free support for this application here. If you have anything to contribute, let us know in the comments section below!