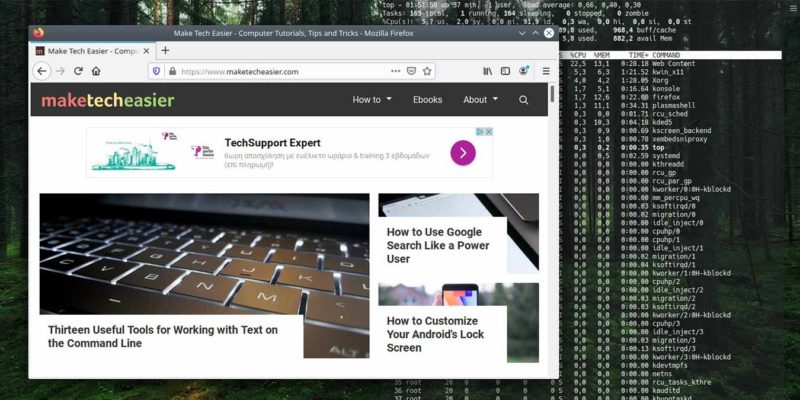 If you are always using the terminal in Linux, then having an always-available terminal as your desktop wallpaper sounds appealing. The Linux terminal comes with many customization options. Here we will show you how you can set your terminal as transparent wallpaper in Kubuntu using Konsole.

For this little project, you don’t want Konsole appearing at random points of the screen. Instead, it should reappear in the same position, with the same dimensions, whenever it is run. KDE helps in that with its per-application appearance settings.

Enable the Position and Size and set them to “Remember.” Also, enable “Maximized vertically” and set it to “Apply Initially -> Yes.” Enable the changes and exit the menu by clicking on OK. Before you proceed to the next step, move the Konsole window where you’d like it to appear every time. It will be harder to do after the next step since we’ll remove its “decoration.”

Disable “Show menubar by default.” It won’t hide Konsole’s menu immediately, but it will make it remember if you’ve hidden it.

After those tweaks, you’ll be getting closer to the desired result. You should already have Konsole as a floating window at the position and dimensions you like. The only two problems are the annoying menu bar and the lack of transparency.

We semi-solved the first problem by disabling the “Show menubar by default” option. Now is a good time to check if everything we did up until now works. Press Ctrl + Shift + M to hide the menu bar. Then, close Konsole and re-run it. It should reappear looking the same as before: same spot on the screen, same dimensions, and lacking a menu bar, a “pure” console window floating on the desktop. It’s time for the final step: making it transparent.

Right-click inside Konsole and choose “Edit Current Profile …” from the menu that pops up.

Move to the “Appearance” group of options and the “Color scheme & font” tab. Check out the themes and pick the one you like. Then, click on “Edit” on the right of the window.

Increase the “Background transparency” value. We suggest you don’t overdo it to keep Konsole’s text legible.

Although your experience might be different, we should mention that the “Blur background” option didn’t work for us. Quite the opposite, it disabled transparency, making the window opaque. If transparency doesn’t work for you, make sure this option is disabled.

Don’t close the window yet! You have to perform one final tweak, and although it’s connected to Konsole’s appearance, you’ll encounter it in its own tab because it also affects usability: scrolling.

Move to the Scrolling set of options and set the “Scrollbar position” to “Hidden.” If you didn’t modify this setting, you’d have a scrollbar slider always visible on your desktop. Set to “hidden;” it will only show up when you need it to.

Theoretically, you’ve reached your goal: you have a transparent terminal behind your windows that also lets your wallpaper shine. But you might disagree with my personal preferences of having it “pop in front of other windows” when clicked and prefer to have Konsole always behind everything else, as if it was “fixed on the wallpaper.”

To achieve this, revisit KDE’s “application specific settings” for Konsole’s window. This time move to the “Arrangement & Access” settings tab. Enable “Keep below” and change it to “Force -> Yes.”

As far as having Konsole autostart at every log-in, adding it to the Autostart list won’t cut it. That way it runs before Plasma effects are applied and loses its transparency. Fortunately, you can work around that.

Fire up your favorite text editor and create a new script wherever you like. I personally have a “Scripts” directory in my home folder for that reason. Give your script a name like “delayed_konsole.sh.” In it, enter:

Save it and exit your text editor. Now, type “autostart” in KDE’s menu and select “Autostart (Automatically Started Applications).”

Click on “Add Script” in the window that appears and find and pick the script you made.

And that’s it. Log out of your desktop, and, if everything worked according to plan, when you re-login, your transparent Konsole window will emerge after a slight delay. If it’s already there, lacking transparency, increase the delay in your script.