As in all RPG hack and style game, the main character (Tehra) has to go around killing monsters, trolls, dragons in order to save the humankind.

At the early stage of the game, you are limited to a simple hack and slash style and also a firebot magic. As you reach higher game level, you will pick up more armors and magical skill that grant you higher destroying power.

There is no experience point in the game, so you can’t power up your character’s traits nor equip your character with better weapons. However, with more gold, you can upgrade your armor and magic to higher level. A powerful armor is the demonic wrath that you get after killing the boss in stage 2. This demonic wrath gives you the ability to transform into a brutal devil with devastating killing power and immune to all attack. It gives you a sense of invincibility during that short period of time.

Initially when you first started the game, there is little guidance on where you have to go and what you have to do. There is no map for you to see and no arrows (like Gameloft style) to guide you. You just have to figure out the way yourself. The orcs is the most common enemies you will face and they never seem to die. When you kill one, the next one respawn. The undead (skeleton) is slightly more difficult to kill, but they don’t respawn. The undead archer is rather annoying and their lightning arrows is difficult to avoid at close distance. You often have to suffer several damages before you can kill them. One good thing, Tehra always run faster than the enemies, so if you are sick of fighting, you can always…err…run. Not a very glorious thing to do for an heroine, but when you need to complete the mission and all these enemies keep pestering you, running seems to be the best thing you should do.

One thing that I dislike is that there are very few recovery potions around. If there is any, their recovery effect is dismal. In places where you are dealing with the bosses, you only have 1 life potion around and it only recovers less than 10% of your lifebar.

The graphics is expected of any RPG games and is nothing short of spectacular. The sound is normal stuff and nothing to wow about (it almost sound similar in all RPG games).

It was stated that there is an online mode that allows people to compete worldwide, but I can’t find such options in the game itself. There are still very detail about this for the moment, probably the online world competition mode refers to the submission of your high score to the scoreboard (If that is the case, that is kind of disappointing). It will be great if you can play in a MMRPG setting. 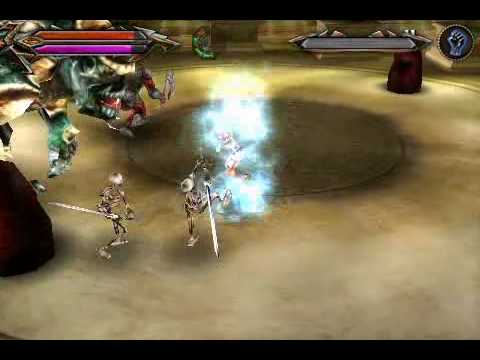 All in all, this is not a bad game, but it is just a tad bit of difficult and lack of several features (such as more recovery potions, able to change weapons, upgrade character’s traits etc) that can make it even better. At a price tag of $3.99, I would say it is a steal.