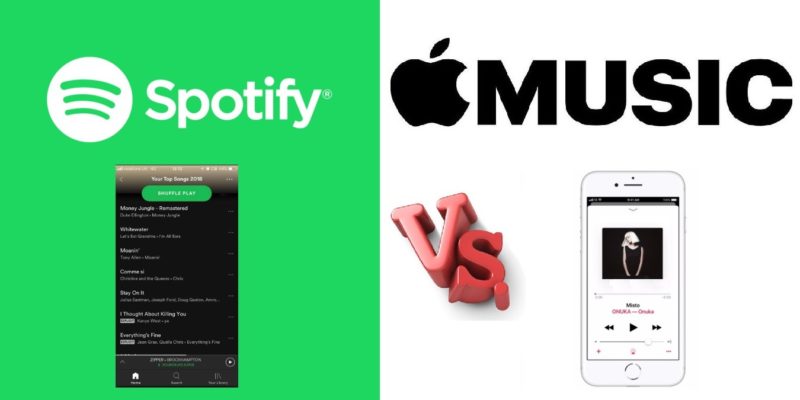 Both Spotify and Apple Music provide music streaming services with plenty of subscribers. While Apple always had a strong legacy in digital music with products like iPod and iTunes, it was Spotify that pioneered what we call today the “open music model” to counter piracy.

Given that each has their own massive following, a head-to-head comparison between the two can seem rather pointless. But, in the end, most of us will only purchase one monthly subscription.

Accordingly, to answer the question about whether you should go for Spotify or Apple Music, we will focus on the most common variables as shown below. There will be one clear winner in this music war.

Related: Spotify Web Player Not Working? Here Are the Fixes

Being an early mover in on-demand music streaming services, Spotify has had the time to develop many more useful features. One of them is “Crossfade tracks” which eliminates the silence between the tracks to have a more spontaneous transition. This should bring a DJ-like energy level to your surroundings.

For the social ones, there is “Friend Activity” that allows you to find out in real time what your friends are listening to. Spotify’s algorithms are smart enough to predict your tastes accurately, and its “Discover Music” feature brings you slightly more choices and unknown artists compared to Apple Music.

While Apple Music does not have the algorithmic sophistication of Spotify, it checks all the basics you will actually need. Whether it is offline downloads or effortless streaming across multiple devices, the app has similar flair and functionalities as any other product in the Apple ecosystem. It has also started adding the cool Spotify-like features such as what “friends are listening to.”

Verdict: Spotify has more features but Apple Music clearly does not fall short of relevant features. Therefore, we will consider this round a tie.

Apple Music has set the music collection bar very high by making you “lose yourself in 50 million songs.” In comparison, Spotify has 35 million songs which is not bad either.

The difference is negligible if you are mostly listening to Billboard music and well-known artists, but what works in Apple’s favor is the fact that your personal music is scrutinized more carefully, so your actual collection will be far more interesting.

Some of Spotify’s algorithmic suggestions are not really helpful, and you may find yourself sifting through a lot of mediocre content. For instance, I would not want to listen to some unknown garage band doing a knock-off of Metallica. Just because they sound similar does not mean they are.

Apple, in comparison, thanks to its legacy of iPod and iTunes, has a more intuitive understanding of what the next thing is you will want to listen to. The simple and elegant user interface of Apple helps you remain relaxed in selecting your favorite albums.

Apple Music is way more popular with actual artists and many leading singers debut their singles in this platform first since they are paid better. Apple Music allows you to add 100,000 songs to its library which is ten times higher than Spotify.

Verdict: Apple Music has an advantage because the overall content can be more relevant.

Both Apple Music and Spotify cost the same ($9.99 per month) but Spotify has the advantage of having a free basic plan which Apple doesn’t. However, the advantage wears off quickly because you will have to put up with ads after every two songs which is really not good. Apple Music offers a 90-day free trial compared to Spotify’s 30 days, which balances the free offer. In the end, if you’re going for only one purchase, you will find no differences in price.

Verdict: we will consider this round a tie.

Although they’re trying to change the perception, Apple Music is only useful for Apple ecosystem users. Right now, the app is available with Android, Windows PC, Sonos and Amazon Echo. The actual experience in these other devices may not be all that great, though, as you will have to first convert your existing non-Apple collection to iTunes.

Spotify, in contrast, is readily playable from any device that you have. Whether it’s a mobile, tablet, PC, smartwatch or gaming console, it doesn’t take very long to stream from one device to the next.

If you have a Google Home, you should go for Spotify, as Apple Music is not supported on that speaker. However, Spotify does support Apple HomePod.

Verdict: Spotify is the clear winner when it comes to the devices that are supported, although Apple Music is trying to improve the user experience on non-Apple devices.

Apple Music supports a bit rate of 256 kbps versus 320 kbps of Spotify. To the average human ear, the difference is negligible. However, what sets Apple’s songs apart is the audio quality in AAC which is crisp, fluid and detailed. In contrast, Spotify uses OGG format, and there is a clear quality difference between the two.

However, it can also depend on the playback device used. Apple Music sounds its best when you listen to it on your iPhone, iPad, Macbook or HomePod. Similarly, Spotify sounds great on Android smartphones and Google Home speakers.

Apple Music has the music equalizing feature “EQ,” which allows you to adjust the sound quality with several preloaded effects. No matter which song you are playing, there is more than one way to listen to it.

Following the early success of Spotify in 2006, many other on-demand music streaming apps arrived on the scene including Amazon Music, YouTube Music, and indeed Apple Music. So, this should be a clear plus in Spotify’s favor as they’ve been in this game for much longer. However, in the end, what really matters is which platform gives you an overall better music experience.

Based on that criteria, our final verdict is that if you have good taste in music, Apple Music has a slight edge over Spotify. The abundance of features in Spotify is all good, but when it comes down to what you really want to listen to, Apple Music has the pioneer beat by a sufficient margin.