In the immediate gratification society we live in, we want our computers to be mobile. We want to take them all over the home and office, and even transport them back and forth, and because of that, many people opt for laptops instead of desktop computers. It seems like the perfect solution, until owners of Apple laptops are told the problems they’re having are because their computers aren’t meant to be on their lap or on a desk for very long.

The obvious question at this point is, then why call it a laptop? The name alone is why everyone wants one. It just sounds so mobile. Yet for Apple laptops, specifically MacBooks, they’re not meant to be on your lap, and shouldn’t even be left on while sitting on a desk. No one tells you that until after you experience problems, however, as MacBooks are sold under the guise that they’re so much better because they’re mobile.

Ideally, they are better. Laptops are great for taking with you on vacation, on an airplane, in the car, to a friend’s house, etc. Yet, the MacBooks have one problem. Because they aren’t really meant to sit on your lap or even on a desk for very long, leaving them on your lap can cause harm to both you and the MacBook itself.

I’m on my laptop all day long, and I work from my home. Because of that, my laptop is always on, and I almost always have it on my lap for the convenience of it. Sure, it gets a little warm sometimes, but I never really thought too much about it until I was on vacation and wearing shorts a lot. I started getting a strange marking on my left right where the left side of my MacBook sat. It made my leg very tan, but in a very scattered pattern.

I started researching online and found that MacBooks had a history of doing this. At the time, there were plenty of people experiencing the same thing. Doing a little research I found that the MacBooks had a tendency to overheat. Some even complained of of the whole F-key row heating up to the point it couldn’t even be touched.

Much later, I ended up replacing that earlier MacBook with a new MacBook, and relegated the older one to the usage of the kids in the house. It now sits unopened and attached to a monitor with a wireless keyboard and mouse. The overheating problem still hasn’t gone away, as now the battery has bubbled out of the unit to where it doesn’t lie flat. Nevertheless, it still works.

With the current genereation MacBook, it seems Apple still hasn’t solved the overheating problem. Instead of having that removable battery on the bottom, they completely covered up the bottom of the MacBook with a rubber backing. Apple explains it’s nonslip so that it “always stays right where you put it — whether it’s on a desk, table, or airplane tray.” Yet, the experts will also tell you not to leave it directly on a des, table, or airplane tray.

There is still too much heat being produced by the MacBook, although not in the same way. It would still get very hot on my legs, but now the rubber backing was coming off. It started by bubbling up, and after a month or so of that, it completely came off on one side. After more research, I found that this also isn’t an isolated problem. I took it in to the Genius Bar, and of course my warranty had expired literally days earlier. They gave me the benefit of the doubt and replaced the whole bottom for free, but warned me they wouldn’t be able to do that again, and that it would run around $100 or so. 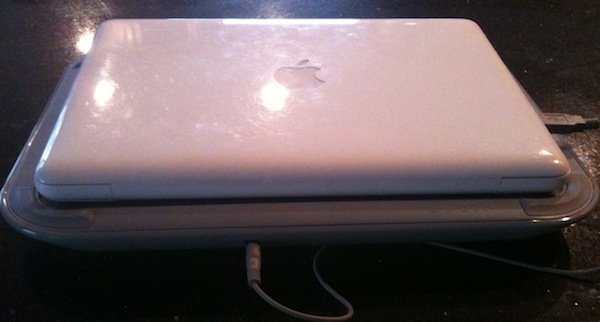 I knew I needed to get some type of cooling solution for the MacBook. I researched cooling pads at both Apple and Amazon. I found they have some mats made of crystals that work well to draw the heat away. As the laptop heats up, it melts the crystals and pulls the heat out. The problem with this solution is that after it’s completely melted, the liquid doesn’t work as well. For this reason, it’s not good for people who are on their laptops for hours at a time.

The other solution is to do the cooling with fans instead of the crystals. Instead of being a soft mat, they’re platforms of sort, usually made of plastic. They’re electric, but run off the power of the laptop’s USB. The negative is that it means one of your valuable USB ports is used up. Because of that, some of the pads have additional USB ports, while others have other extras, such as speakers. I chose a moderately priced one with no extras, the Targus Chill Mat. 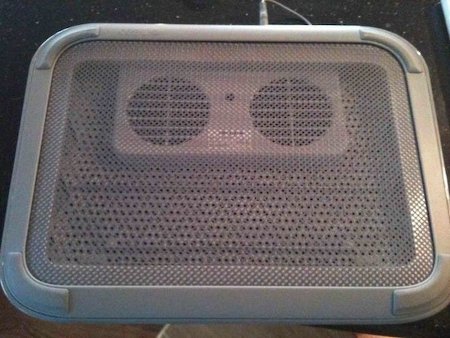 I haven’t ever regretted buying the Chill Mat. Does my laptop still heat up? Yes, somewhat, but nothing like before. I don’t think it will get hot enough to do any more damage. It’s a little cumbersome to carry around with the laptop, whether walking it from here to there, or packing it in a backpack to travel with it, yet I’d rather have a little bit cumbersome than have it burning me or coming apart. Most importantly, it means I can still use it on my lap.

How to Add a Trusted Phone Number to Your Apple ID
Why Are Apple’s Butterfly Keyboards So Bad?
Apple Announces iPadOS, a New Mac Pro, Dark Mode, and More
Apple’s Macbook Keyboard Issues – Which Models Are Affected?
Spilled Water on Your Macbook? Here’s How to Fix a Water-Damaged Macbook
Apple vs. Online Tracking: How and Why iOS 12 and macOS Mojave Are Adding More Privacy Controls
3 Ways to Fix the Service Battery Warning on Mac
How to Fix a MacBook that Won’t Charge