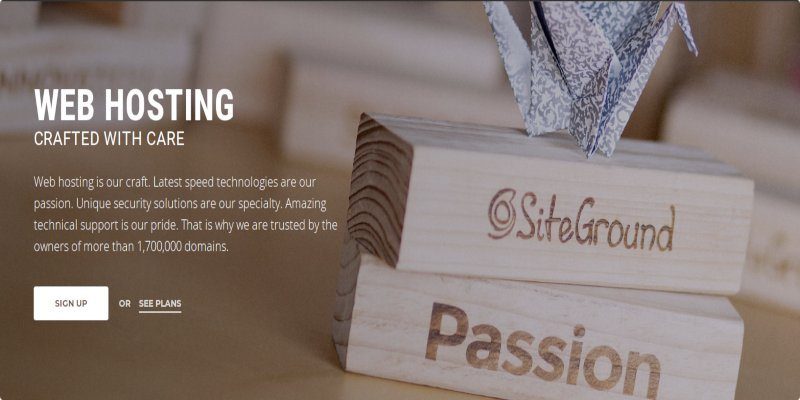 The rise of SiteGround as a service is one of web hosting’s most interesting “rags to riches” stories. As a company, it started in 2004 with only one employee, and in fourteen years it has grown to one of the largest hosts in the world, with data centers in North America, Asia, and Europe serving over a million domains.

Considering the company’s youth, we’re intrigued at how quickly it rose to stardom, and we believe that it’s worth taking a look at it from a technical perspective. In this SiteGround review we twisted every knob we could to determine whether it deserves its stratospheric rank.

SiteGround may not have many years under its belt as a service, but it packs a hefty load of offers. Among them are shared web hosting, cloud hosting, reseller hosting, and dedicated servers.

In this particular review of SiteGround, we decided on ordering their basic package, which includes most of the features that would help a business get its feet wet in having a web presence. Higher-tiered options offer things like unlimited websites, premium backup services, and easy drag-and-drop setups catering specifically to e-commerce. These are things that we don’t particularly think are absolutely necessary for a small business or brand.

Verdict: If you are serious about SEO and site load speed, SiteGround is one good web host you will not want to miss. 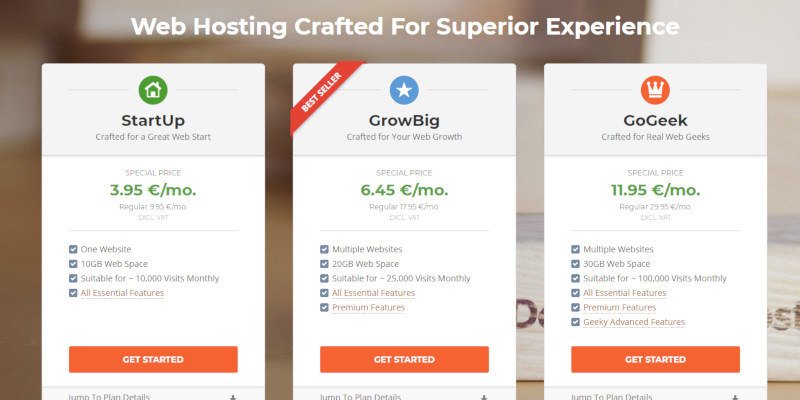 At first, SiteGround’s prices may look like a bummer compared to those of HostGator, but we found that its singular (yes, there was only one) extra fee was opt-in as opposed to the experience of seeing a bunch of already-ticked checkboxes “volunteering” us for services we might not have needed. Instead, it was a clean ordering page with a dropdown menu allowing us to choose a payment plan and the option to include malware scanning.

Should you desire a malware scanning service for your website, that will net you an additional 18.60 € ($19.80 in the US) per year.

SSL certificates are free for all subscriptions, but none of them contain extended verification, which you might need if you plan on running a website that stakes its reputation on having top-notch security.

There are three plans in SiteGround’s offer:

This is a far cry from prices we’ve seen elsewhere, but they do include free email for all plans, a CloudFlare setup right off the bat, and regular backups. The one thing that hits the hardest against this pricing structure is the fact that “GoGeek” does not appear to include EV certificates.

Having a server that hosts your website without any hiccups eliminates a lot of the frustration that people encounter during their relationships with their service providers. Because SiteGround is a young company, we looked at what users of the service had to say about its uptime record to gauge its performance over time. Of the 1951 veritable reviews we found that mentioned its reliability, we found overwhelmingly positive feedback going back at least three years.

Now, I think it’s time we test its latency and speed in various situations.

Many of the customer reviews we’ve looked at glowingly referred to very quick loading times on their websites when using SiteGround. When a website loads, it all starts with the response time. If it takes longer than half a second to respond to queries, it’s already a given that loading times won’t be great.

At first glance, response times were kind of mellow. We sincerely expected better results coming from a service that has received so many plaudits from its user base. However, one single test doesn’t cut it. We tried this again at a later hour.

Though response times improved with a request from Bangalore, the same mellow results appeared across the board. Perhaps a third test three hours later would reveal something different?

Another three hours have passed, and boy, what a difference we saw with that London ping! What puzzled us throughout this series of tests is that our US pings were consistently low while the UK pings arrived unusually late to the party. The data center we are using is in The Netherlands, which means that we theoretically should have incredibly good peering with London.

But if we really want to be fair, we have to look at website load times.

While performing our tests, we noticed something strange about Pingdom. It no longer reports where the site’s speed was tested, and its performance grade rating is utterly useless. For load times that were much faster, we saw lower grades overall than previous tests we’ve done where websites loaded much more slowly.

We therefore choose to ignore Pingdom’s performance grade and will judge loading times using our own scale. Maile Ohye, a talented tech lead who was an excellent communicator and left Google in February 2017, was known to have said, “Two seconds is the threshold for e-commerce website acceptability. At Google we aim for under half a second.”

Let’s not exaggerate, however. Most people have the patience to wait up to four seconds for a website to load. We will therefore apply the following scale for our reviews going forward:

From now on, every review we do on MakeTechEasier regarding a web host will be graded on this scale. For our previous HostGator review, that puts the hosting service at a C+ on average.

Now that we got that out of the way, we will use the “closest server” policy when accumulating our results. This means that we will try to find the closest requesting server to the data center offered to us to get the most localized evaluation results. Let’s see how SiteGround fared with a server in Frankfurt, Germany: 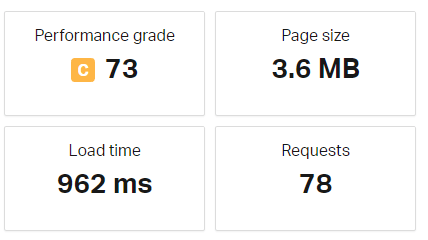 That’s putting it in A+ territory so far. That was a result from the early morning, though. People were just getting ready to go to work. Let’s see how it fares in a busy time for the European Internet: 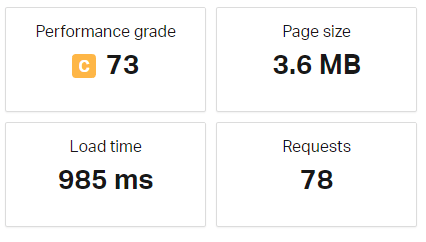 It’s still hitting it out of the ballpark! We should try this a third time and see how it works while we overwhelm the website with a little bit more load. 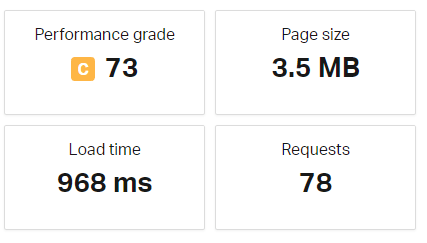 This puts the final to an average of 971.66 ms load time. Considering the fact that nearly a third of that is spent waiting for a reply from the server (due to the ping response time results we analyzed earlier), those are impressive load times for a package at this price. The final score is on the edge of an A+ but still well-deserved, especially considering the fact that our page size is larger than in previous tests we’ve done in other reviews.

Nothing is more frustrating for web developers and administrators than an FTP server with wonky speeds. At MTE we take this sort of thing so seriously that we even have our own 1 Gigabit connection hooked up to a computer with more than enough horsepower to handle it. We will perform three uploads of a 4-gigabyte file to our FTP server with hopes that SiteGround doesn’t disappoint us in this one last endeavor.

The results of our test were painful, to say the least. All of our upload attempts resulted in a paltry one megabyte per second. This included uploads of smaller files to account for throttling of larger ones. There was nothing we could do to break that barrier except wait through the grueling process. We are sad to report that download speeds were also capped at 1 MBps.

We didn’t know if this had to do with the fact that this is just how the lower-tier package performs or if this applied to all subscriptions (more on that later). However, one megabit per second at a reliable rate should be enough for most smaller websites. Since the upload speed is so slow, this may entice the power users among us to go for the staging options that SiteGround has in order to avoid having to upload newer website revisions from in-house workstations.

We were glad this time that we didn’t have to “play dumb” to test SiteGround’s support. We actually needed help confirming something. Although it was our suspicion that the FTP servers are capped at 1 Mbps, we couldn’t dismiss the possibility that perhaps the way our own servers were configured weren’t up to snuff. After all, the system we used to make the transfers had just recently been formatted with a fresh operating system.

We tried reaching SiteGround via its UK phone number at around 12:00 GMT, but we didn’t make much progress since we were put on hold for more than the time we were told to expect to wait (five minutes for an expected one-minute wait). When we reached out via chat, we were instantly connected to an operator who was kind enough to inform us that FTP is actually capped even lower than 1 Mbps for shared hosting plans. This includes all subscriptions. 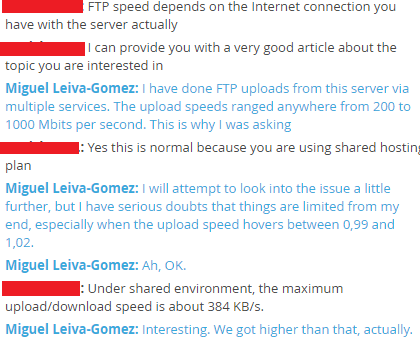 The session took about 15 minutes in total, though most of the chatting took place in the last five minutes.

From choosing a plan, to making a payment, to setting up a website, we took a total of five minutes. That is no exaggeration. It was an incredibly streamlined process with support available at every step of the way and a knowledge base that was extraordinarily helpful in case someone would get stranded in their journey. Everything looks new and fresh. Controls were fast.

Although we enjoyed the setup experience, we found it lacking in speed when it came to actually getting some media into our site. Nonetheless, the overwhelmingly streamlined process impressed us.

Customer reviews for SiteGround were overwhelmingly positive, and we have a couple of things to say about that.

In the grand scheme of things, SiteGround is indeed a major force to contend with. Its shared hosting is almost unparalleled in an industry full of gimmicks and what-nots that are constantly thrown in your face … for a fee.

It’s refreshing to see web hosting so simplified, yet rich in features that come in a package that elegantly ties into a holistic experience. The only major setback when using SiteGround’s services was the way FTP uploading was so limited that it nearly drove us to frustration.

Although we can see why users of the service give it such overwhelmingly positive feedback, we’d like to get down to the good, the bad, and the ugly of SiteGround.

To draw a final conclusion on this matter, we feel that we cannot ignore the horrid early 2000’s-level throttling we get from SiteGround’s FTP services. This is why, for the sake of objectivity – despite elation at everything else – we are forced to give SiteGround the “perfect, but not quite there” score of: