There have been a lot of improvements to Photo Stream since Apple introduced it with iOS 5. I remember feeling frustrated when I wanted to delete a single photo from appearing on Photo Stream and discovering my only option was to delete all my pictures in iCloud and start anew. Thankfully, Apple fixed that little inconvenience in a later update.

The newest Photo Stream upgrade is the ability to create multiple albums you can share, right from your iPhone, iPad or iPod Touch. If you’re on a Mac, you can also share, modify, comment and edit these pictures on Apple’s iPhoto software.

Here’s how you can get the most out of this feature on both an iOS device and on a Mac.

You can create and add images to a Photo Stream album on your iPhone, iPad or iPod Touch running iOS 6 in many ways. The easiest way is to select a picture (or even several) from any of your photo albums, tap on the share icon, then select Photo Stream from the presented options. 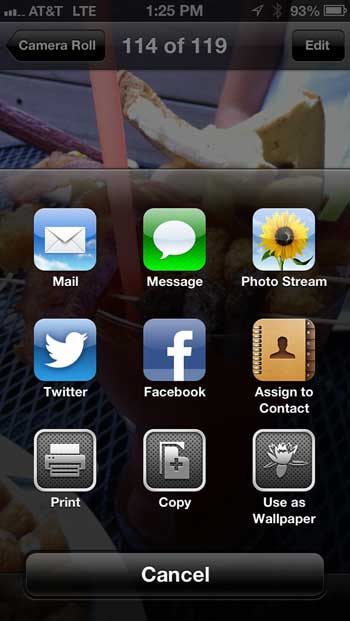 If you haven’t created a Photo Stream album already, you can create one on this screen by tapping on “New Photo Stream“.

The next set of options will allow you to name the new album, designate who can see it, and includes a public toggle button. Choosing a public album will allow you to share your photos with anyone you give the Photo Stream link to. 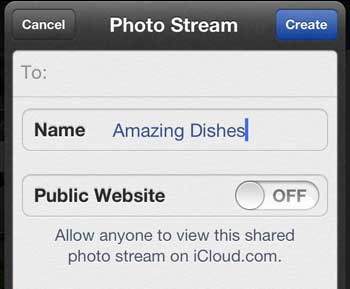 If you’d like, you can name your album and proceed to the next step. You can always provide access to others later.

Before posting your photo to your new Photo Stream album, you can add a comment. 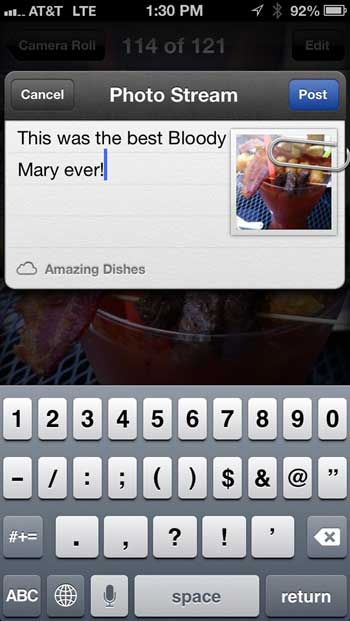 Once you’ve created an album, you can still modify it. To do this click on the blue arrow directly to the right of your Photo Stream album name; you may change the album name, add or delete those you are sharing it with and adjust your public settings.

Once you’ve provided access to your album (weather public or to a specific audience), they will always be able to see any photos transferred to that specific album –that is, unless you modify these privacy preferences or delete the album altogether.

Photo Stream Albums on a Mac

For this example, we’ll be using iPhoto. Share any photo from your iPhoto albums by selecting an image and clicking on the share icon on the lower right corner and choosing Photo Stream from the list menu. 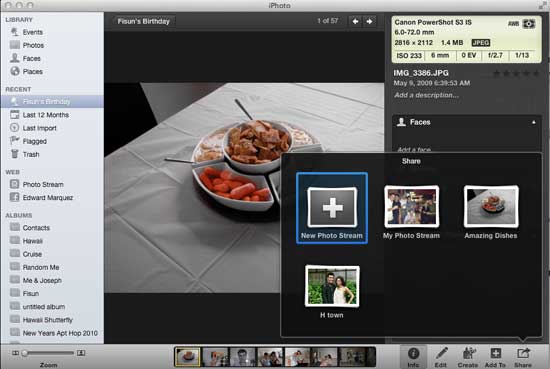 Here you may select a specific album, or as its iOS counterpart, create a new one.

Note: I couldn’t find a way to create an album directly from the Photo Stream view in iPhoto. It seems publishing an image by the sharing icon is the only way to create one. I’m unsure if this is the same case with Aperture.

Sharing your favorite photos with Photo Stream albums are not limited to Apple devices. If you’d like to share a few pictures with grandma, make the album public and email the link. 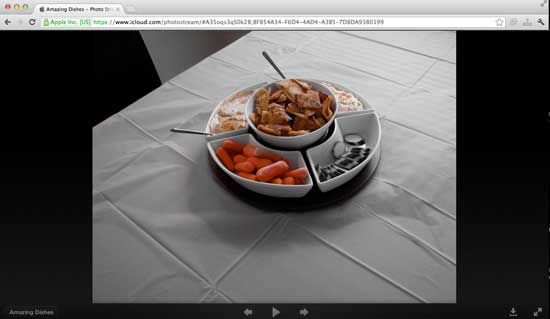 These public albums have limited features; you can’t add or view comments, for instance. However, visitors can download an entire album easily thus allowing you to remove public access later.

Receiving Photo Stream Albums From Others

If Apple’s Photo Stream service becomes popular, you may start receiving invitations to join or view shared albums on iCloud more frequently. Depending on the privacy preferences, you may need Apple ID and compatible device to access the shared album.

There’s a ton of photo sharing software and services out there. I don’t even want to think about how many photos I’ve uploaded on Facebook. I like the idea of creating a Photo Stream album and sharing it with only a handful of people, hopefully it will catch on.

Playing Old DOS Games on macOS with DOSBox
How to Run Android Apps on Mac
How to Set Live Wallpapers on an iPhone
Apple Pay Not Working? Here’s How to Fix It
How to Get Rid of the Floating Screenshot Preview in macOS
The Anatomy of macOS App Bundles
Syncing macOS and iOS: How Do They Connect?
How to Boost Your MacBook Productivity with These 5 Catalina Features