If you have administered a Linux server before, you will be familiar with the commonly used LAMP (Linux, Apache, MySQL, PHP) stack. However, Apache, MySQL and PHP can sometimes be resource intensive and may not be the best for your server. In this tutorial, we are going to replace each and every part of the stack, except Linux, with a better alternative – Nginx, MariaDB and HHVM.

1. This tutorial is done on a Ubuntu 14.04 server, though the instructions will work for any Debian-based distro as well.

2. This tutorial only focuses on installing and setting up the LEMH stack. It does not touch on the security aspect of the server.

Nginx is a lightweight, yet powerful, replacement for Apache. It is an open source reverse proxy server as well as a web server with a strong focus on high concurrency, high performance and low memory usage. Do note that Nginx is not compatible with Apache, so all the Apache configuration, particularly those .htaccess files that you created, won’t work in Nginx. It is also possible to run both Apache and Nginx on the same server, but that will involve some complicated configuration which we won’t be covering here.

Nginx is found in the Ubuntu repository, but it is often outdated. To get the latest stable version, add the following PPA to your system:

The latest version of Nginx as of this post is 1.6.2. Alternatively, if you want to try out the latest developmental version, you can use this PPA instead:

The latest developmental version as of this post is 1.7.8.

To install Nginx, run the command:

Once installed, run the following command to make sure it is started:

For many years, MySQL is the default database management service for many applications. Since it was acquired by Oracle, many people started to question its “open-source”-ness, and the community (which included the founder of MySQL) decided to create a fork of MySQL and named it MariaDB. MariaDB is a drop-in replacement for MySQL, which means it is fully compatible with MySQL databases and can be used as a total replacement for MySQL.

In your server, if you have previously installed MySQL, it is best to remove MySQL completely before installing MariaDB:

Next, add the PPA for MariaDB:

Note that you can also generate your own PPA here and find the location closest to your server.

Install MariaDB with this command:

During the installation, it will prompt you to set a password for the root user.

After the installation, you can start MariaDB with the command:

HHVM is not a replacement for PHP. It is an open-source virtual machine designed for executing programs written in Hack and PHP. HHVM uses a just-in-time (JIT) compilation approach to achieve superior performance while maintaining the development flexibility that PHP provides.

Before we install HHVM, it is important to first install PHP in the server. Instead of installing the full PHP5 package, which includes a bunch of Apache files, we will only install php5-fpm, which will then install the necessary PHP dependencies. Also, we will need php5-fpm as a fallback for HHVM.

Once done, install HHVM with the commands: 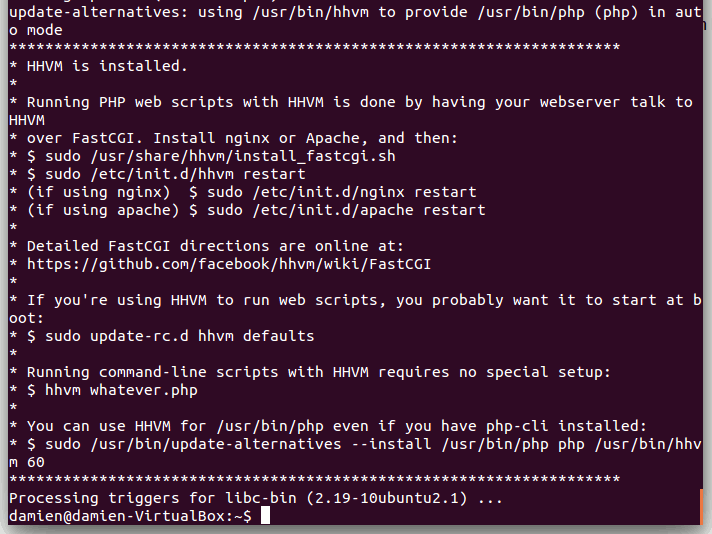 After HHVM is installed, proceed to configure it for Nginx with the command:

To test if HHVM is working, create a “phpinfo.php” file in the Nginx root folder.

and paste the following line:

Now that you have everything set up, it is time to create a virtual host to run your website.

Create a new config file that holds your website detail:

and paste in the following snippet:

You can change the server_name to point to your own domain and the root folder location where you want the files to be served.

HHVM has this bug of crashing occasionally without restarting itself; this will cause the website to fail with a 500 error. In this case, we will create a fallback system whereby PHP5-FPM will take over when HHVM fails. Notice the location @fallback block in the config snippet above? That is the callback when HHVM fails. To complete the equation, we still need to create the “hhvm-with-fallback.conf” file which is a modified version of the “hhvm.conf” file.

Save and exit the file.

and if everything is fine, restart Nginx.

That’s it. You have completed the LEMH stack setup on your Linux server.