Tough times call for tough decisions, and you’ve probably been looking for ways to cut down on electric consumption around the house. Have you ever looked at your desktop PC? With the right configuration, you can cut down the power usage of your computer by as much as 60%. Considering that the average computer can use up to 250 Watts per hour, chopping off some of that electrical load should be a priority for you, even if you end up shaving just 10 Watts.

Most high-end systems boast energy-saving features, but even with those measures in place, you might be startled by how much such a computer consumes when it’s most active. While you can’t make a practical reduction in a computer’s power consumption when you use it intensely, you can still lower the amount of power it consumes when you’re using it casually, or when you’re off the PC.

Higher-end graphics cards use over 100 Watts of power when you’re playing a game or editing a video. Hard drives can consume 35 watts or more even when the drive is idle because the platters are still spinning. They consume even more when they read or write data. Almost everything your computer uses consumes a certain amount of power. The more components your computer has, the more power you consume. Some high-end systems eat up around 400 Watts, while others might even consume up to and over 750 Watts per hour.

Computers are useless without someone at the keyboard. If you’re going to spend more than an hour away from the keyboard, turn the computer off. It takes only like 2 minutes for a computer to turn back on anyway. You might not smile now, but look at your electric bill a month from now. Do I see a grin? :)

Let’s say your computer uses 110 Watts on average. This was the average power consumption of a computer back in the late 90s. Now, let’s say you’re home for 6 hours of the day before you go to sleep, and you always turn on the computer when you get home until it’s bedtime. You’re consuming 660 Watts per day, and most of that time, you’re probably busy doing laundry, cooking, watching football, or whatever it is you do when you’re away from the computer.

Now, let’s say you spend about two hours per day away from the computer while it’s on. You’re practically wasting 220 watts per day. In 2011, the national average price of electricity is around 12 cents per kilowatt hour. You’re wasting 2 cents per day, at that rate. It adds up, though, to just below $10 a year. Now, consider that computers consume more now than they did before.

Change the computer’s average usage to 400 Watts, and run the same scenario. Your daily usage is 2.4 kilowatts. That’s 28 cents per day, or $105 per year. That’s a much higher sum, right?

Leaving your computer unattended for two hours per day wastes 0.8 kilowatts per day, or roughly 9.6 cents per day. That’s $35 per year, minus taxes and hidden fees that electrical service companies just love to charge you. If you’re really concerned about saving money, turn off the computer when you don’t use it.

If you’re not using your printer, turn it off. USB drives and other peripherals use a bit of power as well. If you remove them from their USB ports, you save a bit on electricity. If you know your way around the computer’s hardware, remove components that you don’t use, like network cards, modems, extra graphics cards, and hard drives. Here’s another trick: If your computer has two smaller hard drives, get one bigger one and merge the data from both drives into that big one. You consume a slightly smaller amount of power this way.

If you have more than one optical (CD/DVD/Blu-Ray) drive, what do you need both for? Unless you run a copy studio, you should have only one optical drive.

If you don’t want to go through the inconvenience of having to boot up your computer every time you return from some other household duty, you can always change the power options in Windows to minimize the amount of power the computer uses while it’s snoozing idly. In your computer’s control panel, there’s an icon that says “Hardware and Sound.” Click it, and then click “Power Options.” You should end up in a screen like this: 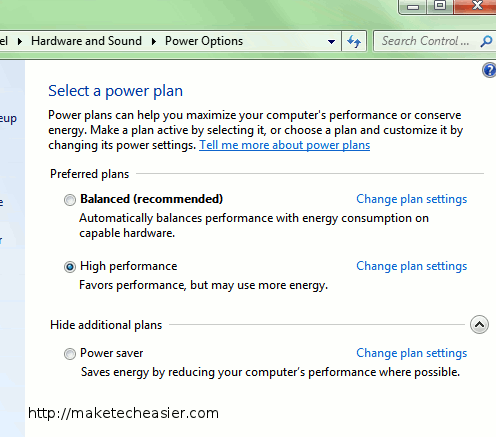 Under the additional plans, select “Power saver.” This plan turns the display off if you’re away from the keyboard for more than 5 minutes. If your processor doesn’t have a large load of tasks to do, it’s underclocked and underpowered accordingly. The hard disk turns off if it doesn’t see any requests for information. Basically, everything on your computer stands still waiting for you to come back. If, after 15 minutes, you haven’t returned, the computer puts itself in “sleep mode”. which basically retains all memory, but shuts off most essential components. In this state, once you turn on the computer, it will power up much faster and almost instantly boot back into the state you left it in.

If you don’t feel comfortable with the power saver plan, you can always choose “Balanced”, which will restrict your computer’s power consumption much less. After all, you shouldn’t let your comfort slide down for a couple of bucks saved per year.

If you’re not much of a gamer or graphics designer, you don’t need a high-end graphics card to power your computer; neither do you need a hard drive that spins faster than 7200 RPMs. Be on the lookout for greener computers and peripherals coming out of the woodwork. They can save you plenty of money and still perform just like any other computer. If you’re really into saving every cent you can, consider getting a netbook or a smaller laptop. They both eat up less Watts per hour than your average desktop computer.

High-end hardware isn’t always the key to making your computer run faster. If you behave conservatively with your system, defragment your hard drive, and rid your computer of unnecessary software, it’ll run much faster.