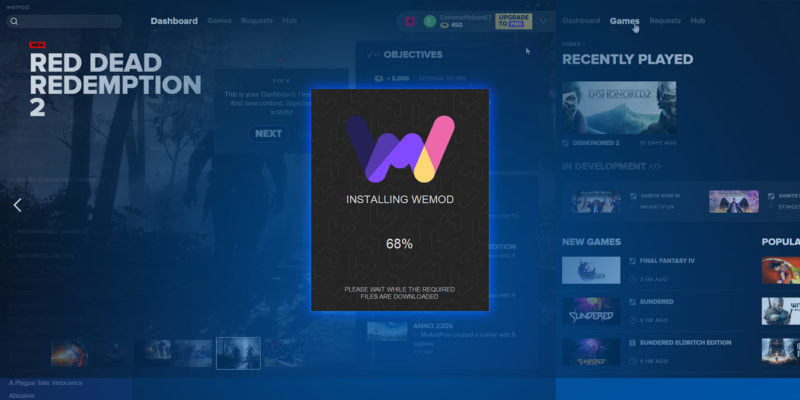 Do you always feel frustrated that the games you are playing are too difficult and you can never complete them? Do you always hope for god-like power that allows you to kill all the enemies with one blow? With WeMod, you can now easily cheat in games.

Trainers, as they came to be known, are programs that can modify a game to offer the player godlike powers. Those may start from a simple infinite ammunition cheat and extend to customizable jump heights and teleport functions.

There are two reasons for which many people don’t like the very idea of trainers:

First, the fact they stemmed from “warez.”. Those were pirated versions of games, that in many occasions also carried viruses. Trainers today are not “tied” to murky software, and it’s rare for one to come with a virus. But it’s not unheard of, and many sites that carry trainers also host cracks for games.

The second reason, though, and why the majority of people don’t like them, is because they offer an unfair advantage to anyone who uses them in multiplayer games.

That’s why you should only download trainers from trusted sources, and never use them in multiplayer games – or you risk getting banned for doing so. If you use them as they should be used, though, in your single-player games, they can triple the time you can spend having fun with them, allowing you to expand its mechanics or turn into a god in its virtual world.

WeMod solves the first of those problems by acting as a secure source for thousands of trainers for various games. It cannot restrict you from using them in multiplayer games though, so please, don’t do it. And if you do, and get yourself banned, don’t blame us.

With that out of the way, let’s see how you can become an unstoppable force in your favorite games’ virtual worlds.

Visit WeMod’s official site and click on the download link (only available for Windows) on its first page.

Run the file you just downloaded to install WeMod on your computer. In our case, it was a streamlined process that didn’t require any input.

If you are behind a firewall, make sure to create rules that grant Internet access to WeMod, or it won’t be able to download any trainers for your games.

And with that, you are ready to game!

Probably the first thing that you will see when you run WeMod will be an advert praising its premium plan. We won’t stop you from signing it up, but for now, we will ignore it and close it by clicking on the semi-hidden close button on the top-right of the window.

WeMod will take you on a tour of its interface. Check it out, for in this article we’ll stick to its “let’s cheat some games” aspect.

Move to the Games tab, where you will find a list with all your games that WeMod recognized, for which it might have trainers.

Select one of the compatible games from the list on the left.

WeMod’s main page will update with information about the selected game, and may offer different options depending on if you got your game from Steam, Origin, or GOG.

In our case, we tried the original Crysis, which seemed to only have a single trainer for it – from “Mr. Antifun.” We clicked on the trainer to select it.

Before enabling any cheats, the game has to be active. Click on the big “Play” button, on the top-right, to start it.

You may have a supported version of a game installed, but for some reason, WeMod won’t detect it.

In that case, you can click on the right of the “Play” button, on the downward-pointing arrow, and choose “Add Custom Installation.” You can also drag and drop its executable in that “box.”

This will manually import your game’s executable into WeMod.

It helps to have two monitors, or to run your game in a window, to be able to see WeMod next to it. If not, first load your game, but don’t get into any action.

Alt + Tab back into WeMod, and you’ll see that the “Play” button now mentions that you are “playing.” Note the hotkeys assigned to each cheat – that’s how you enable and disable them. You can click on any of them re-assign it to any keypress you wish. After you’re done, Alt + Tab back into your game.

Use the defined hotkeys to enable the cheats they are mapped to.

And that was it! Enjoy your newfound superpowers, and see your favorite games from a new angle. It might not be “the correct way to play them,” but cheating can make your favorite single-player games fun again in fresh ways.