Ryzen is AMD’s latest line of desktop processors, launching with a new motherboard socket and a dramatically different architecture. This architecture has made AMD a much better choice for gaming than they have been in some time, but is that enough to combat Intel’s market dominance?

What Sets Ryzen Apart and Why Intel Is Considered King

Ignore the prices in the image above – at the time of release, these two processors were both competing to be the best gaming CPUs that either company had to offer and were priced much closer together.

Back then the 8350 was the pinnacle of AMD’S FX line, while the 3570K was Intel’s mid-range monster CPU. The 3570K’s sheer power, however, led Intel to market dominance, and that dominance has remained uncontested in the years since.

To understand why Ryzen is a big deal, it’s first important to understand a few basic truths about CPUs. Most important of these is that clock speed and core count alone do not determine a good processor. In fact, AMD’s last-gen FX lines were often up to eight cores but would fall behind Intel in gaming and productivity applications alike. This is also illustrated in the image below – despite having more cores and a higher clock speed, the 8350 simply could not compete with the 3570K.

For a long time Intel has dominated the market thanks to significantly stronger single-core performance. This is easier to optimize around for gaming, so Intel processors have been the top pick for PC gamers everywhere for quite some time. Fully utilizing quad (and octo) core systems is difficult, if not impossible, for most game engines. Because of this, strong Intel dual-core and quad-core processors have generally been the best options for gamers, but Ryzen is starting to change that.

Ryzen 3 vs. Intel Pentium and i3

Meanwhile, the Ryzen 3 1300X is meant to compete with the Intel i3 line, but most especially the i3 7350K, a dual-core processor equipped with hyperthreading. The results here are similar: trading blows depending on the game but with Ryzen still having a respectable lead in rendering and streaming.

If gaming is your top priority and all you care about are your frames, I recommend either the G4620 or the Ryzen 3 1300X if you want the best FPS per dollar.

If you want a more rendering-capable PC for cheaper than the 1300X, the 1200 is also a great option.

Ryzen 5, i5s and the higher-end 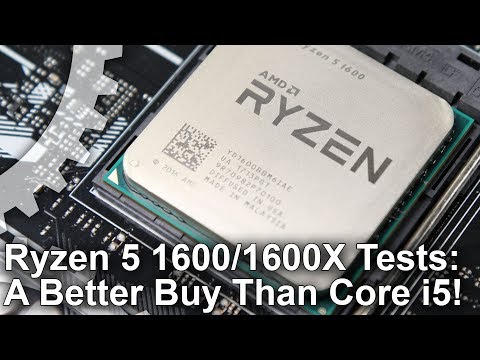 Ultimately, the story seen in the low-end repeats in the higher-end. In general, the Ryzen processors will compete on par with their corresponding Intel processors, trading blows depending on the game and occasionally having slightly lower overall performance. However, especially with Ryzen 5 and Ryzen 7s, the higher core count and threads allows AMD to pull significantly ahead in heavy, non-gaming tasks like rendering video or streaming your gameplay live.

If you’re in the market for a new processor for a gaming PC build, I recommend going with Intel if it’s priced significantly lower than its competing Ryzen chip. Otherwise, just go Ryzen – not only will you enjoy basically the same gaming performance in most instances, you’ll also have a much more well-rounded system for doing other heavy tasks.

If you need help with anything else or have any other questions, comment below and let us know!

Graphics Card Buyer's Guide 2021: What to Look for When Buying a GPU

What You Need to Know Before Buying a Used Laptop

Why Does My TV Say No Signal? A Quick Troubleshooting Guide

What is VRM and How it Affects CPU Performance

6 of the Best Raspberry Pi Alternatives

AMD vs. Nvidia GPUs: Who Should Supply Your Graphics Card in 2021?

Is a Gaming Laptop Worth Buying in 2021?