Microsoft introduced Snap View in Windows 7 where you can snap an application window to the side of the screen and have it automatically resize itself to half of the screen. This is great when you want to view two windows side by side. In Windows 8, you can also do the same thing, with both desktop and native apps.

One thing to note is that the Snap View cannot be activated in the Desktop environment. The starting point should be in the Windows 8 Start screen. You need to open at least two or three Windows 8 native apps first (e.g. Maps, Weather, and Travel) so you can drag and drop the apps easily.

On your PC or laptop, go to the Windows 8 start screen and start a native app (for example, the Weather app). Move the cursor to the lower left corner of the screen and you’ll see the Windows screen icon along with the running apps.

Hover the cursor over the app’s thumbnail. Drag and drop the app you wish to see on the right panel and the screen will automatically allot a space. For example, if you want the Weather app on the left side, drag and drop the second app (Sports) to the right. 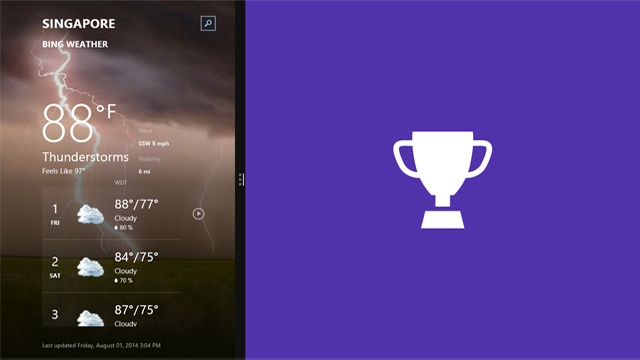 Note: Slowly drag and drop the thumbnail onto the desired panel; otherwise, the app maintains the full-screen view.

A successful Snap view looks like the screenshot below. In the middle of the screen, there’s a line separating the left and right pane. Hover the cursor on that slice, and you can resize or scale the windows – drag it to the left or right – if you double-click the line, it will scale the windows equally. 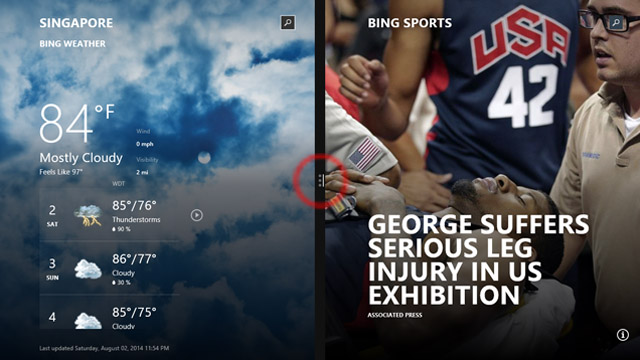 You can change the apps on each panel, too, whether it’s a desktop program or native app. Just repeat the two steps above, drag and drop each one slowly, and presto!

If you launch a new native app, the screen will look like the one below. Click the side where you wish to drop the app or program. 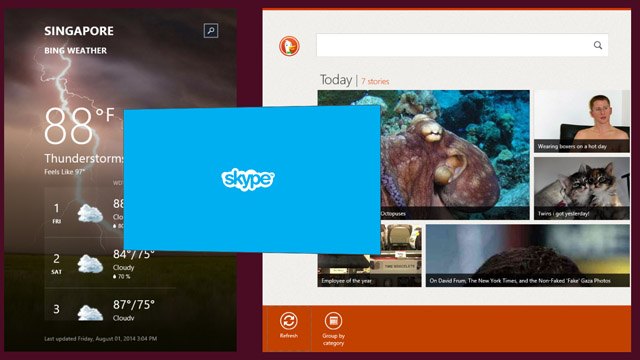 On the other hand, Snap also allows you to resize the apps within the windows. For example, if Food and Drink native app is opened, hover the cursor on the upper corner to see the “Minimize” and “Close” buttons.

The same thing goes for the desktop window. For example, the opened Internet browser can be minimised, maximised (up to the scaled window size only), or closed, and you can still access the pop-up for Settings. 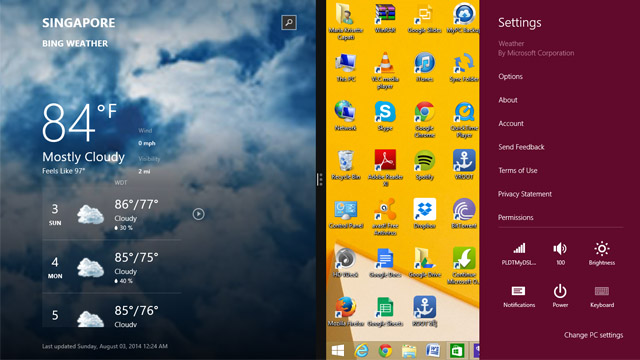 If you wish to use the full-screen mode again, just drag the line to the left or right completely.

Snap hack has improved my productivity when I’m using desktop and Windows 8 native apps at the same time, whether I’m researching, writing or editing files. And honestly, I’m also tempted to troll away my time for social media, YouTube and movies while working.

Having multiple apps on the screen and running them simultaneously makes the Windows 8 experience impressive for me. What do you think of Snap view features?

How to Manage Android Devices on a Windows PC with Your Phone App
Microsoft Adds Linux Kernel to Windows – How Does this Affect You?
What Windows’ “Microsoft Managed Desktop” Will (And Won’t!) Do
Windows 10 S is Here: Everything You Need to Know
Microsoft Found a New Place to Display Ads in Windows 10. Here’s What You Need To Do
How to Use Windows Defender Offline to Clear Persistent Infections
Classic Shell: A No Nonsense Start Menu for Windows 10
Microsoft’s New Surface Pro 4 and Surface Book: What You Need to Know