I’ve been using Apple computers since 1989 and have been buying them since 1993. I have not have just Macs in my home, but an iPhone and iPad as well. Yet, when it came to buying a product to connect the Internet to my TV, I chose a Roku instead of Apple TV.

I’m still surprised myself that I chose to not stick with the Apple branding. However, when I compared the two choices, it seemed like I wouldn’t be getting everything I wanted from the Apple TV. To get what I wanted, I had to go with the Roku. Now having used the Roku, I haven’t regretted that decision once.

The largest stumbling block with the Apple TV is that it only works with HDTV. Sure, some people have found some workarounds, but they don’t seem like altogether good options. While searching for the Apple TV on Amazon, I found the Roku. Unlike Apple, it can be used on either HDTV or standard. I decided it was my best option, and then had to decide between the three Roku models. I’m not a big gamer, and that seemed to be the selling point of the most expensive model. Since the only difference between the mid-range and low-range models was high-definition, my decision was already made for me.

When you’re used to cable boxes and DVDs, the Roku seems very small. It’s not much bigger than a hockey puck. It comes with the power cord, an AV cable to connect it to a standard TV, and a remote. If you’re connecting to HDTV, or if you don’t have wireless Internet, those cables can be purchased separately. After plugging the Roku in, it displays a screen that asks you to enter a short code on the Roku website on your computer. Once you do this and start a Roku account, the setup is complete. You will need a credit card to set up your account, but the only time you will be charged is if you decide to purchase content or channels. The included remote allows you to select channels, play, pause, forward, reverse, etc.

With the entertainment channels, you can stream movies and TV episodes to your television. With Pandora, you can stream music that matches your tastes. What I particularly enjoy is streaming photos from my Facebook account, both my own and those of the people on my Friends list. It’s something I’m using the Roku for that I didn’t expect to. 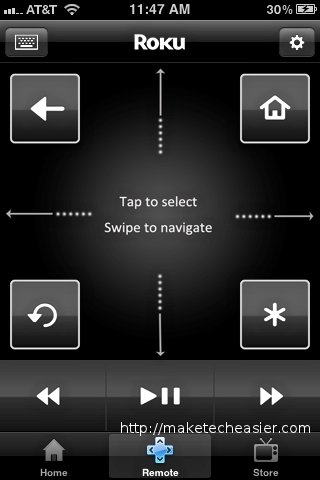 If you have an iOS device, such as an iPhone or iPad, you can download a Roku app to act as the remote. It can make it a little more handy since you are most likely already sitting with your device next to you anyway. It’s only slightly clunkier to use, and it eliminates the need for one more device to be sitting next to you.

What I miss out on by not getting the Apple TV is not having streaming access to my iTunes library. That was the only reason I considered not getting the Roku. In the end, I decided if I could listen to my music on all my other devices, it wasn’t that important. And I don’t download TV and movies from iTunes anyway, just music. I can still listen to music I enjoy on Pandora. I hated to break away from my tradition of Apple, but for my uses, the Roku was the most sound decision, and after purchasing it, I haven’t regretted the decision.

What about you? Would you prefer Roku or Apple TV?