Tasks once handled by desktop software are moving into the “cloud.” Browsers have adapted, and you likely use more tabs now than ever before. Firefox has its “ColoredTabs” extension, which we covered previously, for differentiation, but Chromium browsers have no such equivalent.

Fret not: whether you use Chrome, Opera, Vivaldi or another Chromium-based browser, there are two ways to seize greater control over their tabs. 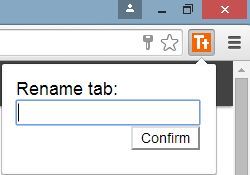 This extension, Tab Titler, is the more basic of the two, hence its position as the first entry. If all you want to do is change tab titles, this extension does the trick.

Completed installation will add another button to the browser UI. Click this button, and a pop-up shows all you need: a text box and a ‘Confirm’ button, though you can press the Enter/Return button instead.

The effect is immediate, but it is not long-lasting. If you change the page, whether through following another link or typing in another address, the tab does not retain the name you assigned. 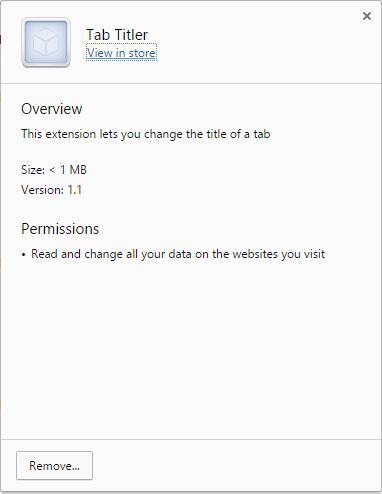 It is a shame that Tab Titler does not retain the assigned names, but it does function. If temporarily changing the name is sufficient, Tab Titler could be perfect.

There are no tricks or advanced settings to worry about with Rename Tab – in fact, it’s very similar to Tab Titler. Once installed there is a button in the usual position. 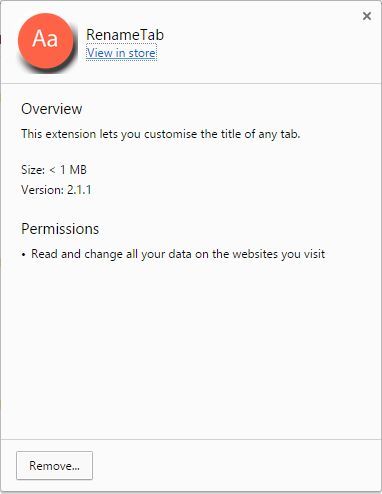 Click it and you have a text box to rename the currently-viewed tab as well as a keyboard shortcut to summon the pop-up when you want. 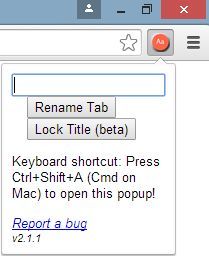 Rename Tab’s unusual inclusion is the “Lock Tab” button. Clicking this with a name entered permanently changes the tab’s name to what you’ve chosen. There is no way to unlock a tab without closing it, but you can rename it to something else. This could be convenient if you’re researching a specific event or period in one tab and something else in another.

This extension is basic, yet fully functional. When pages are loading, you’ll momentarily see the original name, but it does revert to the modified name … mostly. The feature is marked as a beta, and sometimes it likes to make that very clear, refusing to lock the name no matter how you try to force it. The other real limitation is that you can’t unlock a tab name, short of closing the tab and opening another.

Unfortunately, as you will have noticed, editing tab titles in Chrome is quite limited. Compared to the control provided over Firefox and its tabs, you may be feeling somewhat disappointed.

Given how similar the two extensions we highlighted are, the clearest way of determining a winner are its features. Thus, Rename Tab is the clear winner. It’s every bit as straightforward to use and has a beta ‘Lock Tab’ feature as well as a keyboard shortcut.

A look through the Chrome App Store will turn up a few other extensions which may appear to do the same job, but we found them to be more advanced, and arguably overkill for what we set out to achieve.

New Chromium-Based Microsoft Edge Released
15 Hidden Google Games You Need to Play
Is Grammarly the Best Proofreading Extension for Chrome?
How to Hide Bookmarks on Your Computer Using Google Chrome
What Does the Padlock in My Browser’s Address Bar Mean?
How to Change the Default Font in Google Chrome
How Does Brave Browser Compare to Chrome
How to Hide Chrome Extension Icons and Declutter Your Toolbar