The number of truly free and open source games available for download is small in general, but in terms of genre, first-person shooters (FPS) have plenty of representation. This is largely due to the 3D engines that have been released into the free software community, which lend themselves well to FPS games. The Cube Engine 2 is one such 3D system, and Red Eclipse is the latest FPS to utilize it. Version 1.0 of Red Eclipse was just released a few weeks ago, and I decided to give it a try. It is free to download for Linux, BSD, Mac OS X, and Windows

Like many of the free FPS games, Red Eclipse is primarily geared toward multi-player matches, and although it includes some single-player functionality, it refers to it as “practice” and does not offer any storyline or cut scenes like you would expect from a commercial singe-player game.

In terms of multi-player variations, it has all the match types you would expect plus a few extra. Matches include: Campaign, Deathmatch, Capture the Flag, Defend the Flag, and Time Trial. Another match type, Bomber Ball, is a variation of Capture the Flag that requires you to deliver a bomb to the enemy base before it explodes in your hands. Red Eclipse also includes numerous “mutators” that modify the gameplay in a variety of ways when applied. Some of them are: 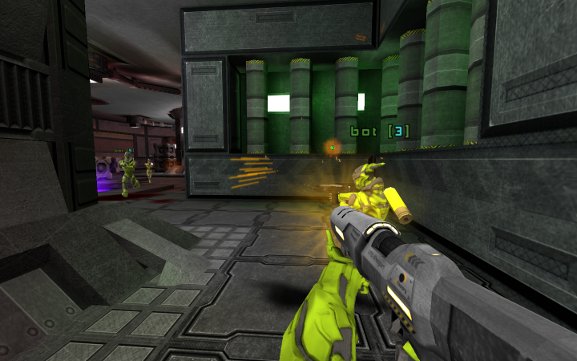 Based on the Cube Engine 2, Red Eclipse offers a pretty decent graphical experience. It will not blow you away, but it can impress at times with its dynamic lighting, shadows, explosive effects, and general bloody carnage. Motion blurring and reflections further help immerse you in the gameplay.

Character models for the players are somewhat generic in their almost Halo-looking spacesuits, but they serve their purpose sufficiently. 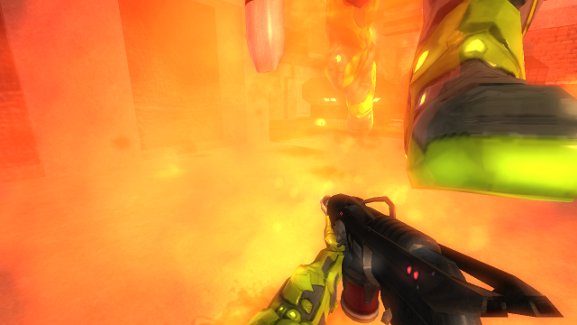 The weapons look impressive, particularly the sword (although I had little success actually cutting someone without getting shot).

One benefit of using the Cube Engine 2 is that Red Eclipse is fast – extremely fast.  Even on a low-end notebook, I was able to get full effects and super-fast gameplay.  The speed is particularly useful when taking advantage of features like the ability to momentarily walk up a wall or leap from an impossibly high ledge, features the game makers refer to as “Agile Gameplay”.

The game modes are thoughtful, and one can expect that more modes and mutators will be added as the game matures.  Many of the multi-player servers may be empty when you look for online matches, as would be expected with such a new game, but there is usually at least one server with active participants. 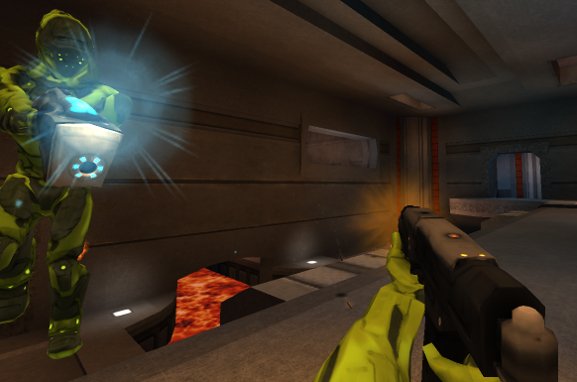 Some things with Red Eclipse take time to get used to, such as needing to press a key to pick up a weapon. Although that is probably more realistic than the snatch-and-shoot style of other multiplayer FPS games, it tends to slow down an otherwise fast-paced game. It also makes it unlikely you will be able to hit enemies with a barrage of different weapons in one attack.

The controls are pretty straightforward and fully customizable. Those who are used to the mouse+keyboard assault combination will feel right at home.

One of the most unique and promising features of Red Eclipse is the Editor. It already features a good number of maps, and users can create their own with an in-game editor. This means that you can literally walk around in your world as you create it. This is a feature of the Cube Engine 2, which makes switching back and forth between editing and testing a matter of keystrokes.

Red Eclipse is not a game changer in terms of the FPS genre, but it will definitely attract those who are familiar with its multi-player predecessors. Furthermore, features like the mutators and editor place it a little higher than some of the other free and open source FPS games.

While the graphics will not blow you away, the gameplay is fast and fluid, allowing for intense battles and a lot of the agile gameplay the developers promised to deliver. Red Eclipse passes the ultimate test of being fun without complications. For that, it gets a four out of five. Oh, one more thing. When you play the campaign, be prepared to shoot zombies.