The first step to increasing your computational efficiency is recognizing opportunities for automation. Whenever you have to repeat the same action more than a couple times, you should think about how you can automate it. For example, if you have to execute the same mouse action over and over again, you can use software to record and playback mouse activity.

Before we begin, it’s important to realize that mouse recording is a little bit stupid. It simply records and plays back a series of actions. It doesn’t change based on context or window position, so simple things can cause it to fail.

For example, if you accidentally move a window a couple of pixels, the cursor might miss a button and cause the whole macro to fail. For this reason, mouse recording is only particularly useful in niche circumstances, like repeating the same exact action many times without change. 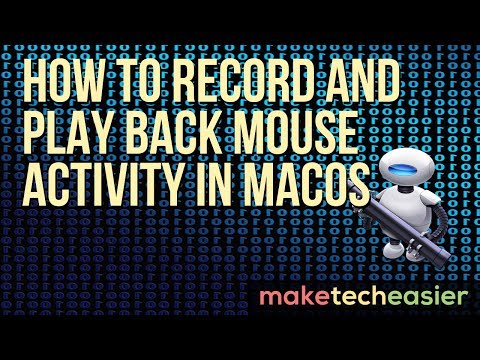 Using Automator to Record and Play Back Mouse Actions

Every Mac contains a built-in software called Automator. This application allows you to automate a set of basic actions on your Mac using a rudimentary, block-based programming language. But Automator doesn’t have blocks for everything since the minority of apps make their internal functions available to Automator. To get around this, Automator includes a featured called “Watch Me Do” that allows users to record and play back their actions. You can use this as part of a larger Automator workflow or use it as a standalone action.

1. Open Automator from the Spotlight menu or Applications folder.

2. Click on the Workflow icon and click “Choose” to create a new Workflow. Workflows are triggered from within the Automator application and run while the application is open. You can also create applications that can be run outside of Automator for later use or Services that run from the context menu.

3. Click the Record button in the menu bar. If you haven’t added Automator to your Accessibility menu yet, you’ll need to do that before you can proceed.

4. Execute the actions you want to save as a macro. Any input you provide will be recorded. This includes mouse movement and keyboard actions.

5. When finished, click the “Stop” button in the Automator HUD.

6. Click the “Run” button to play back your actions.

Using MurGaa Recorder to Record and Play Back Mouse Actions

If you’re not a fan of Automator or you find its interface limiting, you can use the free MurGaa Recorder to record and play back mouse actions in macOS.

3. Before you start recording mouse activity, you should set a keyboard shortcut for beginning and ending recording. This will make your recordings cleaner and more repeatable since they won’t include you clicking the start and stop recording buttons.

4. Use the start and stop keyboard shortcut to begin and end your mouse recording. A digital voice effect will confirm that recording has started and stopped when you successfully press your hotkeys.

5. Click the “Play Recording” button to play back your recording.

If you want to repeat the action more than once, you can change the number next to the “Play Recording” button to something greater than one. You can also set a delay before beginning playback or adjust the playback speed with the options at the bottom of the window.

As you’ve seen here, you can easily use macOS’s built-in Automator app or the free MurGaa Recorder to record and playback mouse actions on macOS.

How to Run Bash Commands in the Background in Linux

Wi-Fi Not Working in Linux? Here’s How to Fix it

How to Fix "No Route to Host" Connection Error on Linux

The Best Desktop Environments of 2021

10 of the Best Linux Debuggers for Software Engineers

How to Repair a Corrupted USB Drive in Linux

Tmux vs. Screen: Which Is the Best Terminal Multiplexer?

12 of the Best Image Editors for Linux