The Raspberry Pi Zero is one of the smallest full computers you can buy, but how does it stand up against its brothers in the Pi family? Is it a viable platform or just a gimmick?

In this article we take a look at the Raspberry Pi Zero and give our first impressions of this impressively small and cheap little computer.

The first thing you notice about the Zero right out of the box is how truly shockingly tiny it is. It’s 65mm x 30mm, and you can literally hold it in the palm of your hand without it touching the sides. If you can’t get your hands on one (and getting your hands on one at all is a feat in itself, let us tell you) imagine a 12″ ruler and snap off the first 2.5″ of it and hold it in your hand. That’s how small it is. It’s tiny. And in this small board you have everything you need to run a decent desktop computer.

It would comfortably fit inside a first generation white Apple Remote or an original Nintendo GameBoy cartridge. Sone of you have probably already realised it fits in an Altoids tin, leaving room for many other components and sockets. It would fit inside the body tube of a standard Estes flying model rocket and form the basis of a real life guidance system. You could hide one behind a name badge. It boggles the mind. 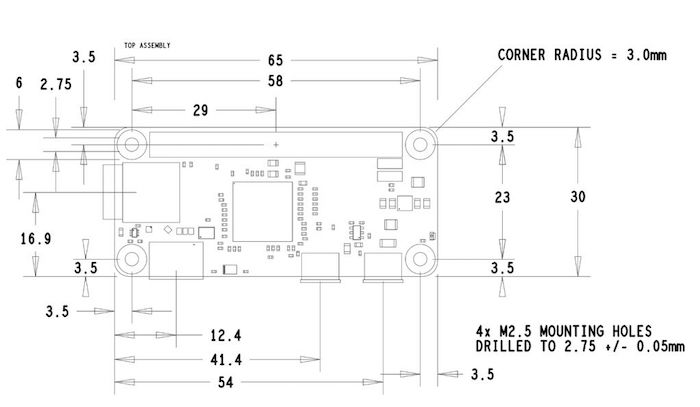 It achieves this minute stature by having all the bulky components from the previous revisions of the board removed, like the Ethernet port, the full size HDMI and USB ports, the GPIO and camera and monitor connections, etc. It’s stripped down to the bone with only a MicroSD or TF card slot and low profile HDMI and USB micro ports. It’s so smooth, in fact, you could slip it into a shirt pocket, and you probably wouldn’t know it was in there. 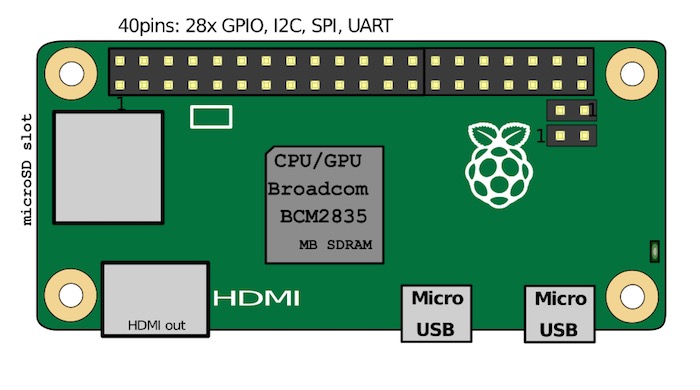 While you can post-purchase a loose strip of pins you can solder into the GPIO holes on the board, it doesn’t come fitted with them as standard in order to keep the profile and size down, but not everyone needs GPIO after all. In addition, it does have a naked composite video header on the board, but if you want to actually plug anything into it, you’ll have to source a socket and solder it on there yourself.

Of course, this brutal strip-down means that if you buy a $5 Zero, you have to also buy adapters to upgrade the two USB and HDMI ports to full size to plug in USB sticks and HDMI displays, and, of course, you will also need a power supply, though you might have some of these things already.

Note that one of the USB ports is for power, so while it has two micro USB ports on the board, only one of them is for I/O. If you want to plug more than one USB device into the Zero, you will also need a USB hub.

If you don’t already have suitable adapters, you don’t have to use the official components; if you shop around online (especially in China), you can find cheap replacement adapters or, better still, full-sized leads which will fit both ends. A mini HDMI to full-sized lead, for example, is better than using a full-sized lead plugged into an adapter, as this may put unnecessary stress on the port, especially if you move your Pi around a lot.

So that a review on the size, what about speed?

The CPU in the Zero is a respectably-clocked 1GHz Arm11 chip by Broadcom, the same chip as what’s in the original Pi, but faster by over 300MHz than the original’s 700MHz. Yes, it’s faster than the original, but not even close to being as fast as the quad core Pi2 or the 1.2GHz 64-bit quad-core ARM Cortex-A53 CPU of the Pi3. Multiple cores will always trump clock speed any day of the week.

The Zero runs faster than an original overclocked Pi and doesn’t need a heat sink because at 1GHz, it’s running at its native speed. 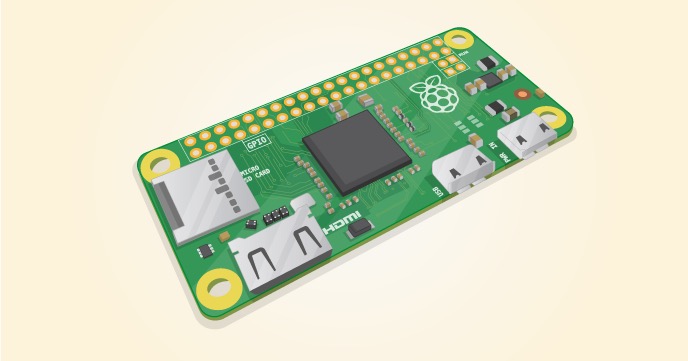 So, while it’s not the fastest Pi in the world, it’s not the slowest, either, and it has the same Videocore GPU as the original Pi and Pi2. It’s on par and will run anything that works in previous Pi boards. Like the original Pi, it’s not a desktop replacement, and while it runs the Linux desktop, it does so painfully slowly and almost grudgingly. But that’s not really what it’s meant for, is it?

It has its own uses. For example, the low-power design means it runs comfortably and much longer from a battery for those embedded, headless projects like the aforementioned rocket guidance system or robots.

Although it might not be as well-served with speed and comfort features, the Zero is utilitarian, doing the job small and well rather than fast and big, and small enough to sneak into even the tightest space on a project. For example, it’s light enough to be taken up on a drone in addition to a camera and power supply or small enough to be slipped unobtrusively into a picture frame.

The analogy we would use is that the Pi3 is basically a sports car; it’s an Aston Martin. It’s ultra fast and has a lot of stuff built in for speed and comfort. The Pi2 is like a cheaper, less well-appointed car like a Toyota MR2 – still fast but not as fast or well-featured as a high-end sports car. So what’s the Pi Zero in this analogy?

The Pi Zero is like a stripped down utilitarian all terrain vehicle, a Jeep or a dune buggy – not fast or even comfortable, but it gets the job done and goes places and in ways an Aston Martin couldn’t possibly hope to do or go.

The most massive downside to the Pi Zero is at this point, even months after release, it’s still virtually impossible to get ahold of one unless you monitor stock levels on an almost hourly basis and order immediately when they come in. This is baffling and annoying. The Raspberry Pi organisation makes enough units of the Pi Zero, according to their press rep, but are still unable to keep up with the massive demand for the computer.

“The best way to get hold of a Pi Zero is to follow our four Zero distributors (listed at https://www.raspberrypi.org/products/pi-zero/) on Twitter, where they tend to post updates about new stock. We’ve made, and continue to make, hundreds of thousands of units, and plenty of batches have hit the shelves now, but as you’ll have seen, they are still selling out extremely quickly. It’s much easier to get your hands on one if you know when it’s worth looking.”

We are still at a loss to explain why it’s so hard, with such demand, to keep enough units on the shelf, unless it’s a sales ploy, but that’s a cynical view. To help you find a Pi Zero in stock, there is a useful tool. 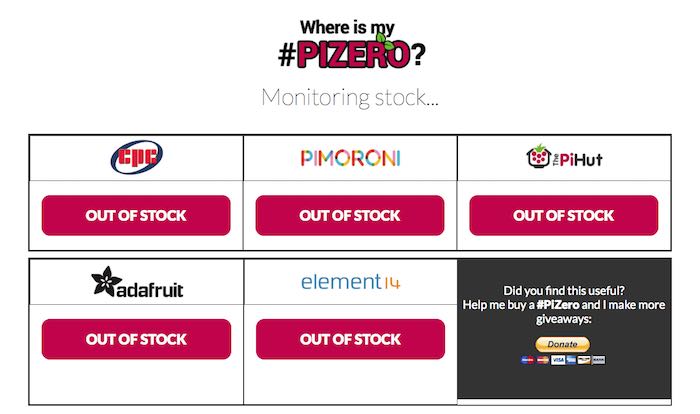 We hope you’ve enjoyed this first look at the Raspberry Pi Zero. You can bet we’ll be visiting it again in future projects, and once the Raspberry Pi organisation starts to keep pace with demand, you might even be able to join in. If you have any questions about the Raspberry Pi, please let us know in the comments below.