Just like everything else these days, Bluetooth speakers are getting smarter. They don’t just play music anymore. Some allow you to make and receive phone calls while others can read micro-SD cards and flash drives.

The speaker we check out here does even more, plus it’s waterproof and includes a micro bass driver that you’ll truly appreciate when listening to music.

The Plusinno Bluetooth speaker, available in black and blue, has a voice control feature for controlling your mobile device or getting information, and it can also be used as a remote shutter for your device’s camera. Here’s a closer look at this well-built wireless speaker.

Inside the box you’ll find the speaker, AUX cable, micro-USB cable, and a carabiner clip. 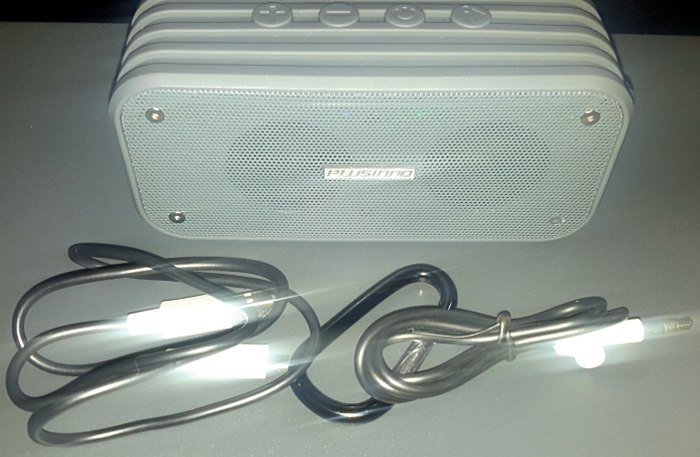 There is a loop on the side of the speaker for you to conveniently attach the carabiner clip to.

There’s no instruction manual for the speaker. Instead, you’ll find a small card with button function details on one side and instructions on how to pair the speaker with your device on the other side.

There are four buttons on top of the speaker, and they’re very important since each one has more than one function:

There are also three ports and one slot on the side of the speaker: audio in, audio out, micro-USB, and micro-SD. 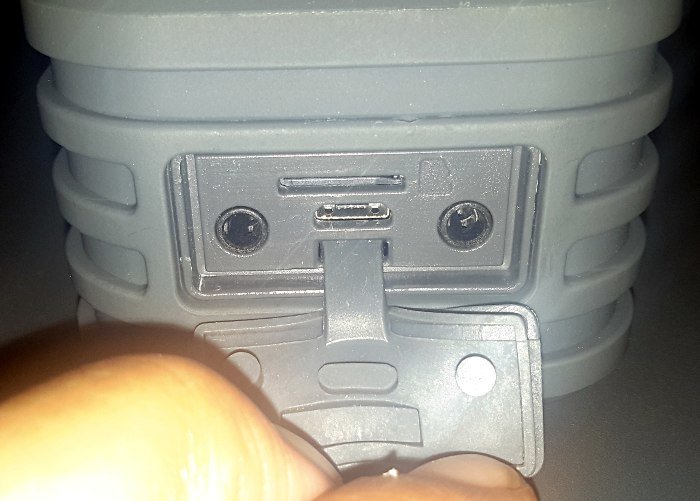 They’re all conveniently hidden behind a well-sealed, silicone flap.

To pair the speaker with your device, you simply turn it on, open Bluetooth settings on your device, and select “Plusinno P10” under devices. It should pair within seconds.

One of the coolest things about this speaker, and something that makes it stand out from the rest, is the built-in voice control feature. By holding the play/pause button for a few seconds, you’ll enable voice control. This allows you to use Siri, Google Now, or voice dialing right from the speaker using the built-in microphone.

When I paired the speaker with my smartphone, I noticed that holding the button opened up voice dialing, and I was able to speak the name (of a contact) or dictate a number to call. However, when pairing with my tablet, it opened up Google Now instead.

I’m assuming that whatever is opened using this feature depends on your device and what you have enabled. I am not using Google Now on my smartphone which is why it doesn’t open.

I do find this feature very handy. It does interrupt the music I’m listening to, but as soon as I speak a command and it responds back, it goes back to playing music. The speaker also picks up very well, and Google Now was just as accurate as when using directly via my tablet.

For instance, my default camera app uses the volume buttons to zoom in and out, so pressing power only zooms in on the camera. However, I can easily use another app that has the option to use the volume buttons as the shutter which in turn allows me to use the power button on the speaker as a remote shutter.

There are four LED indicators on the front of the speaker. One is blue and lets you know that the speaker is on. The other three are green and let you know the speaker’s battery charge level; all three illuminated equals a full or almost full battery while just one illuminated means a low battery. 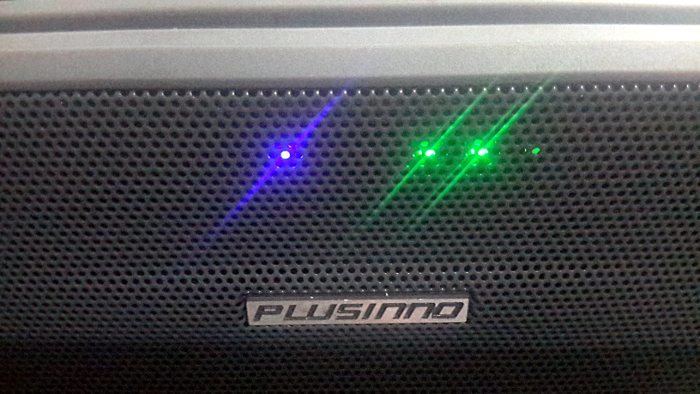 The green LEDs also alternate blinking (cycling from left to right) while charging (when the micro-USB cable is plugged in). This just helps to let you know that it is indeed charging.

This is always my main reason for using a Bluetooth speaker. It’s no different with this one. Listening to music is as expected, except with a lot of bass! We’re talking speaker and surface vibrating bass. If you like a lot of bass, you’ll love this. Vocals and music also sound fantastic.

It’s nice that it has a long range of about 60-feet. However, I did notice that when I took the speaker upstairs while leaving my device downstairs, the music did start to break up and stutter a little. My home is open, too (similar to a loft), and I’ve had other speakers that don’t break up at all no matter where I go in the house, so I was a little surprised by this. It’s by no means a deal breaker, but it let me know that the range isn’t as great as expected.

Since the speaker is waterproof, you can safely use it around water like in the shower or at the pool. Obviously, you don’t want to submerge it in water, but it’s fine if it gets splashed here and there or if you are clumsy (like me) and happen to spill something on it.

As you can see, this speaker is full of features. It’s the first I’ve come across so far that has built-in voice control and Bluetooth shutter functionality. Even though the range isn’t as good as it could be (or maybe it’s just my home), I still think it’s one of the best in its class.

With its impressive extended play time of up to six to twelve hours (six hours at full volume, twelve hours at half volume) and its superb bass and sound clarity, you really can’t go wrong with the Plusinno Bluetooth speaker.

Thanks to Plusinno, we have two speakers to give away! This giveaway contest has ended. The winners have been notified of their winnings.