Pixel Piracy is one great indie game that I came across recently. It doesn’t have great graphics, or even a good control, but it is one game that had me stuck in it for hours every day for the past 2 weeks.

Created by Vitali Kirpu and produced by Alexander Poysky, Pixel Piracy is a side-scrolling 2d, real time strategy/sandbox/simulation game where you are a pirate controlling your crews and ship. Don’t be fooled by the 2d graphics, as the game is tough and punishing, yet addicting at the same time. 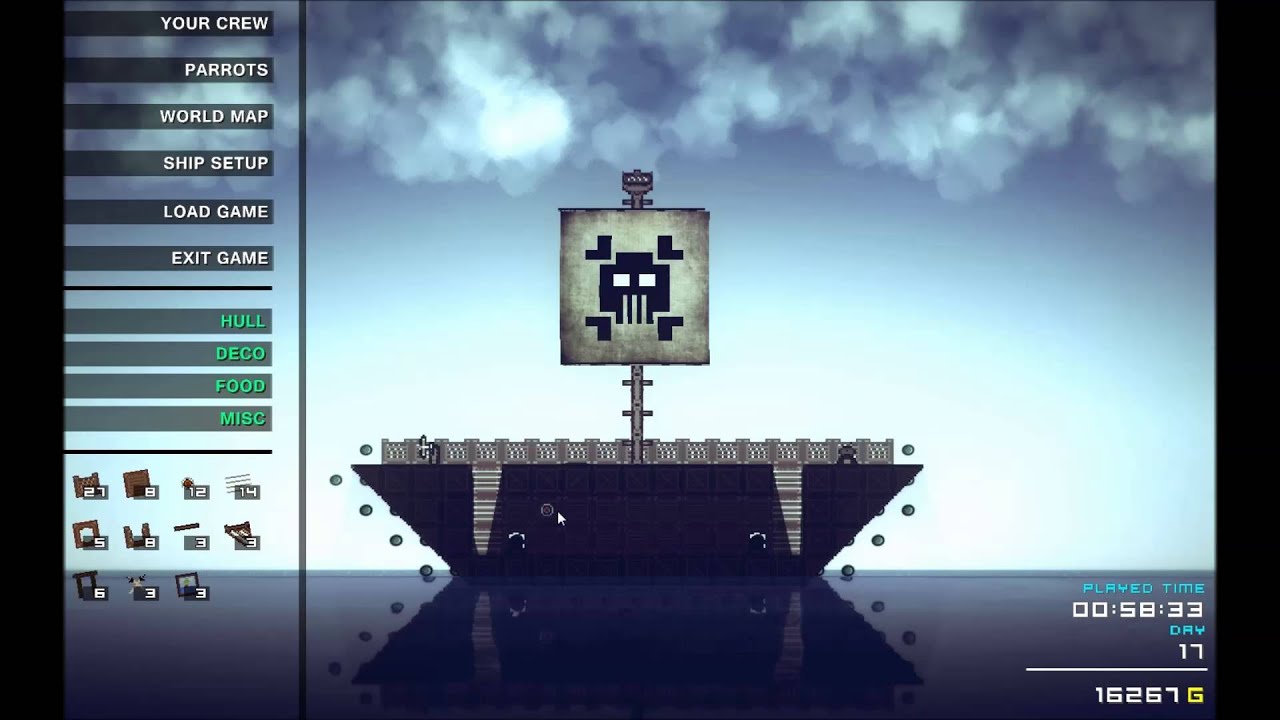 There are three modes to choose from: Princess (starts with 600 golds), Hardcore (500 golds and increased price of goods) and Arena where you pit yourself against countless pirates.

When you first start the game, you are given a few pieces of wood to build your own raft. You are also given some gold (depending on the level of difficulty you have selected) to hire crew, buy weapons, food, books, etc. Most of the stuff, especially the crew, are expensive, so it is important for you to manage your money well and get only the essentials.

Once you have your ship and crew ready, you can go to the World map and set sail to pillage other pirate ships or islands.

Rather than a simple combat and pillage game, Pixel Piracy is really more of a simulation game where you have to micro-manage every aspect of the game. You will have situations where your crew (and you) pooped all over the ship and you have to (buy a book and) teach them how to clean up the poop. The same goes for cooking, cannoning, fishing etc. There are also game points, also known as TP, that you can use to increase the statistics of your crew so they can live longer and fight better during combat.

Mentioning the crew, they come in various professions and have different traits. Some of them are honest and cheerful while some others are traitors, greedy, lazy etc. You won’t be able to view the traits and attributes until you have hired them, so it is hit or miss. In addition, you have to manage their hunger and morale and have to pay them regularly to keep them happy. All these added up to your financial management skill. Not to mention that they will die, too, during combat.

The best thing about Pixel Piracy is that it is open-ended and there is no storyline at all. All the maps are randomly generated and you make decisions along the way. I did mention that the game is tough. Indeed, it is unforgiving. If you die during combat (and you will die very easily), it is game over for you. If your crews were injured during combat, and you didn’t get the bandages from the town, you will see them bleed to death, leaving you with nothing.

The tutorial is pretty basic. It only guides you through the controls and various icons on the screen. For the rest of the things, you have to figure it out yourself. It took me quite a while to figure out how to build my first raft. Sometimes during the combat you realize that you are missing some stuff, like you need to have bandages in your Inventory, and you will have to start a new game to get it right.

After playing it for quite a while, the game control is still something that I am not used to. Instead of the typical FPS game where you use arrow keys to move the character and the mouse to change the view, you have to use the left mouse button to move your character and use the arrow keys to move the map. The right mouse button is used to move your crews. Additionally, there are some icons, like the Attack, Plunder, Capture Ship, Interact, that you have to click (or click and drag) to perform certain actions. It will require some time for you to get used to the control.

Pixel Piracy is still in beta stage, and for a game in beta, it is damn good and shows great promise. Pixel Piracy early access is now available on Steam at a price of $14.99. It is available for Windows, Mac and Linux. This is one game you surely don’t want to miss out on.