These days, Linux distros are a dime a dozen, especially in the field of the Ubuntu remix. Just about anyone thinks they can create a usable spinoff (they’re probably right) and that it’ll be wildly successful (they’re probably wrong). For this reason, we don’t often give a full writeup to an Ubuntu remix on MTE unless it offers something really unique or interesting. Pinguy isn’t exactly revolutionary, but it is among a rare breed: an Ubuntu spinoff that might actually have some real improvements over the original.

Note: As a review, the opinions expressed are completely subjective and belong to the author of the post. If you disagree, please sound off in the comments.

This is where I have some mixed feelings. The theme is lovely, the titlebars and menus look clean, simple, and beautiful, but the desktop layout leaves a bit to be desired. 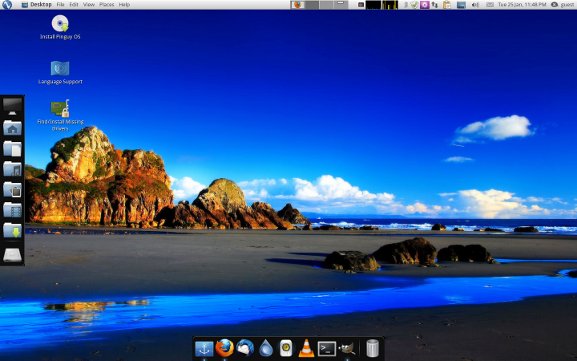 Notice the three docks/panels on the top, left, and bottom. Each panel has its purpose, but in this author’s opinion it seems a silly waste of space to use up three portions of screen space, especially when each is left mostly empty. Much of the screen space for maximised applications ends up useless. Since Docky in this instance is doing little, if anything, that can’t be done by Gnome Panel, why use all all that extra space?

The standard Ubuntu menu has been replaced with MintMenu, a change likely to be welcomed by many users. 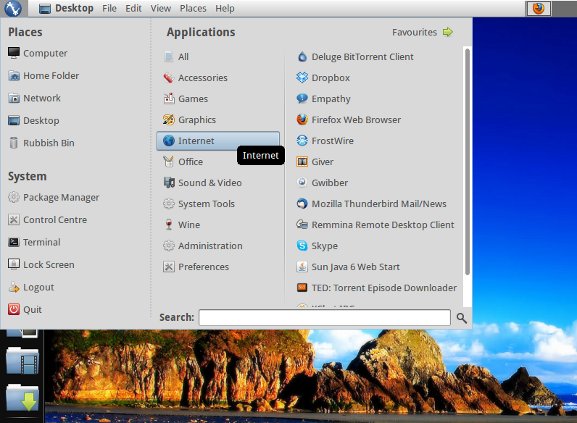 While the usage is pretty straightforward, this author had some trouble getting the menu to work properly. For instance, when entering a search term, the menu would display the correct result, but seemingly does not launch the application when you hit enter, even when there is only a single result in the search box.

Finally, much like the heated titlebar buttons on left or right debate, we’ve got the issue of where to place the application menu, ie File, Edit, Help, etc. Most Windows and Linux users are used to each application window having its own menu. Mac users, however, may welcome Pinguy’s decision to integrate the application menu into the system panel, as shown here. 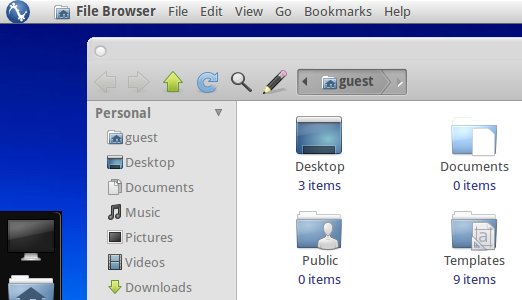 Unfortunately, whether you like or dislike this approach, it doesn’t always work. Some applications appear to be compatible, while others leave the menus inside the application window. Until this can be consistent, it seems unwise to run that as the default configuration.

Like just about any Ubuntu remix, it’s got the same core set of utilities you’ll find on most Ubuntu (and by extension Debian) based systems, but the user-facing applications have nearly all been replaced or reconfigured. The following includes a few of the most prominent additions and replacements:

And a WHOLE lot more. In fact, it’s somewhat astonishing to count the additional applications installed on Pinguy. The ISO is twice the size of a standard Desktop Edition Ubuntu CD, and even Firefox has been loaded full of extensions. 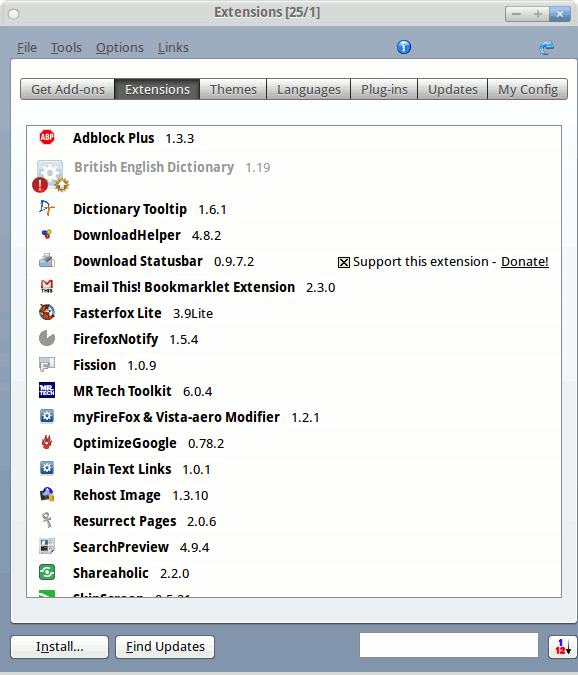 In addition to including some useful software, Pinguy’s developers have made a few system tweaks. This goes for minor things like setting Brasero as the default application for ISO files to somewhat major hiccups (like Flash’s full-screen troubles). This, in the author’s opinion, is the least visible yet most valuable aspect of Pinguy. I have personally seen Flash problems cause new Ubuntu users to give up and go back to Windows on multiple occasions, and remembering to make these background tweaks can sometimes be difficult when you’re setting up a new user. Even Samba, nearly always a pain to configure, is ready virtually out-of-the-box in Pinguy.

It’s the usability changes that make Pinguy worth using. Panels can be moved and settings changed, but when a new user has to spend days with Google and the command line just to watch Flash videos in full screen, they’re a lot more likely to give up and go back to Windows. Pinguy’s developers have taken the time to fix a few of the “tiny papercuts” that have plagued many other promising distributions, and that alone makes it worth recommending. Next time you’re about to hand out a new Ubuntu CD, try Pinguy instead. If it can play ColbertNation without any freezes or hiccups, it’s already better off than a lot of others.