Judging from the name, you might think that OMG Pirates! is a pirates game where you become the baddies and rob people of their treasure. Unfortunately you are only half correct. OMG Pirates! actually played off the silly and absurd Ninja vs Pirates meme and you become the lone ninja that fights off the waves of Pirates who are attacking your homeland.

The creator of OMG Pirates! is Mika Mobile, also the creator of the popular Zombieville USA. The story is simple. You fight and kill pirates to defend your home. There are a total of 9 missions and 3 bosses. Each mission get more difficult than the previous. Once you have completed the 10 missions in the normal mode, the Hard and Survival mode will be unlocked and you can play it again at a more challenging level.

The gameplay is set in a 2D sidescrolling background. A good thing is that you are not defined to 2D movement. You can move up, down, left and right and they have been useful in dodging the enemies’s bullet and cannon. The control is easy. There is a joystick to move around, a green button to jump/block and a red button to attack.

The best part of this game is the leveling system of the character. As you kill a pirate, you gain experience points. When your experience bar is full, you level up and gain a new skill/combo to fight the pirates. The higher levels you achieve, the more powerful is your attack.

There is also a special power meter that fills itself up as you inflict damages to the pirates. When the meter is filled, simply tap on it to unleash the special power and send devastating lightning bolt to your enemies.

At the end of each mission, you will be ranked from Apprentice to Master, depending on your performance. If you die too often, which you definitely will at the start of the game, you will be ranked as “terribad” that really show how bad you are. If this invoked bad feeling in you, you can always go back to the same mission and improve your ranking. Also if you achieve several 5, 10, or 15 master levels, you can unlock some cheats, which add more fun to the gameplay.

You don’t get to see stunning 3D graphics here, but the cartoony characters and effects can be quite visually pleasing too. The soundtrack for each mission is exceptional. You can hear the sound of sword swaying, the rumbling of the cannon explosion and the realistic “arrggghhh” when the pirates are cut up into half. Well done!

Unless you are not into fighting game, this game can easily take up every second of your time. To complete the normal mode is not a difficult task, since you can always continue after you die. The challenging part is in the Survival mode where there is no end to the waves of pirates. The excellent gameplay is what makes this game shine and I think it worths every single cents you pay for it, especially when it costs only $1.99. 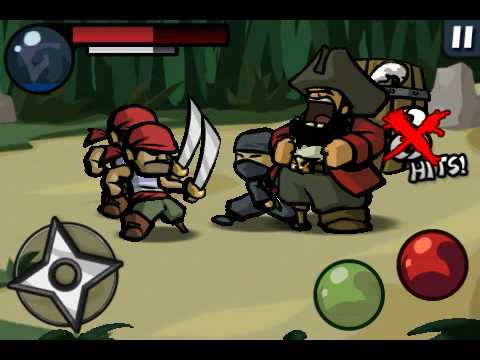