Since its debut in 2012, the Raspberry Pi continues to provide a single-board computing platform that is small, easy to use and affordable. The device comes at an affordable price to benefit designers, developers, and beginners who’re looking to integrate Pi systems into their products.

While the Pi has evolved from a simple single board computer to the powerful 3A+ and 3B+ models we have today, their computing power doesn’t compare with what we’re seeing in the latest and more expensive boards, such as Nvidia Jetson Nano.

Related: 5 of the Best Raspberry Pi Alternatives in 2019

Introduced in early 2019, the Nvidia Jetson Nano has created quite a buzz, and we think we know why. Nvidia has been in the AI and machine-learning game for a number of years. The company launched the first AI-based module, the Jetson TX1, early in 2015 as a solution for drones, robots, and self-driving vehicles. This project was very successful, but it’s $599 price tag meant it was too costly for developers and hobbyists alike. 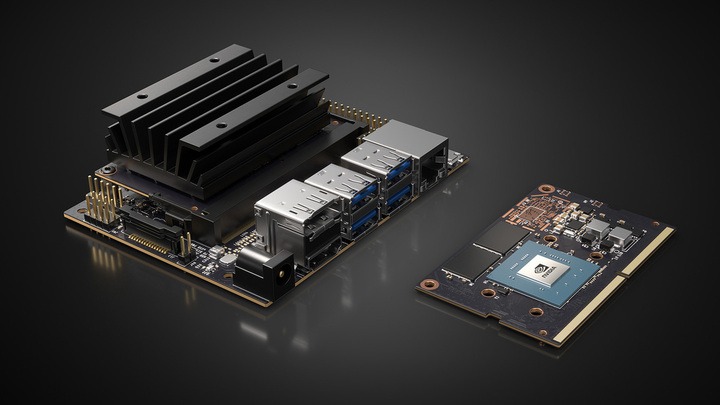 To that end, Nvidia had to come up with a new board that would cater to all users, while leveraging AI and keeping the price in check. And that’s how Jetson Nano was born.

The Jetson Nano is a single-board computer, roughly the size of Raspberry Pi and focused on AI and machine learning. This $99 computing development kit is a true powerhouse and leverages Nvidia’s AI tech and GPU prowess to take single-board computing to a whole new level.

The Jetson Nano, on the other hand, takes machine learning seriously. It boasts of a Nvidia Maxwell 128 CUDA core GPU that is optimized for machine learning. This offers 472 GFLOPS for AI performance as opposed to the 21.4 GFLOPs you get from Raspberry Pi model 3B+.

Powering the GPU is a higher performance 64-bit Quad-core Cortex A57 CPU and a whopping 4GB RAM. While the Rasberry Pi 3+ is built on the same architecture, it only offers 1GB of RAM. This makes the Pi ideal for basic tasks but it can be painful to use it on a desktop environment. The 4GB RAM and more powerful CPU on the Jetson Nano makes it the better choice to perform heavy tasks and run a desktop environment.

When it comes to video processing, the AI functions of the Jetson Nano come to light. The Jetson nano can process 4K videos using the onboard hardware for encode, decode and display. This board can run parallel neural networks to process multiple videos and sensors simultaneously. It can process multiple video streams, up to eight 1080p video feeds at a time (picture drones with multiple lenses), and uses machine-learning algorithms to detect and track images. This chart illustrates how Nvidia Jetson Nano stacks up against Raspberry Pi Model 3A+ and 3B+. 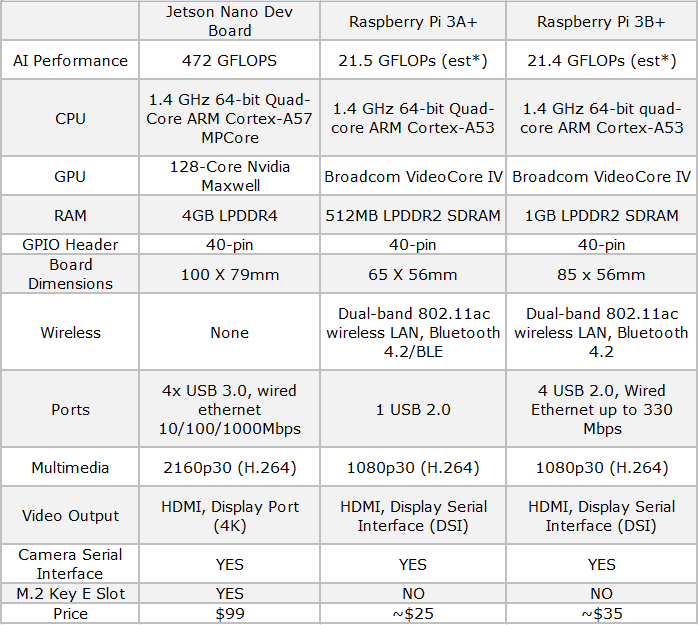 Looking at the chart above, there is really no comparison when it comes to AI performance. At 472 GFLOPs the Jetson Nano is nearly 22x more powerful than both Pi models which offer up to 21.5 GFLOPs. If you’re looking for an AI-based single-board computer, the Jetson Nano is your best choice.

However, Raspberry Pi does have its strong points that can make it a solid choice in many scenarios. For instance, despite its power and AI capabilities, the Jetson Nano lacks wireless LAN. In contrast, both Raspberry Pi feature built-in Wi-Fi.

However, the new ethernet controller for Raspberry Pi offers gigabit connectivity at a maximum throughput of 300Mb/s, which is significantly slower than the Jetson Nano which supports up to 1000Mb/s.

As far as connectivity is concerned, the Jetson Nano offers 4x USB3.0 ports which is an advantage over Raspberry Pi which offers four USB 2.0 ports. So which one is a better option? It all depends on your personal preferences.