When the word “privacy” comes to mind, you probably think about browsing the Internet through a proxy. But you know how slow free proxies are. And did you know that they do not protect you as much as you may think? That’s right! Proxies often keep logs of traffic that goes through them. Even if they don’t keep logs, the traffic is easy to sniff out anyway.

Of course, there is another solution: use Onion Routing (OR). Today, I will explain what onion routing is, how it can benefit you, and even direct you to a special tool that can connect you to the TOR network with just a few clicks of a button.

Onion routing, as the name implies, is a method of anonymous communication across the Internet that involves a chain of “nodes” that relay your messages, eventually arriving at an endpoint. So, when you connect to a node, everything you send gets encrypted at your computer and decrypts at the “exit node.” The exit node is the final node your message will reach before it’s sent directly to its destination. This sets onion routing apart from a regular proxy, since it’s very difficult to trace messages with so many different computers involved. Added to this, no individual node can decrypt your message except the exit node.

Note: Tor is a famous software implementation of OR. It uses onion routing, but some people use the word to describe this method of anonymous browsing. In conclusion, Tor isn’t OR, but it uses it. When you hear someone talking about “using Tor,” though, they’re often referring to the use of onion routing.

A Simple OR Scenario

Let’s examine a data transfer from your computer to the exit node. It should look something like this:

In the return path, each layer of encryption is “peeled off”  by every successive node: 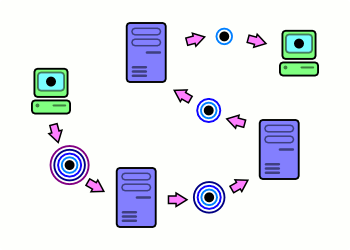 By analyzing this, you can see how ironclad your security is when using this network. In a proxy scenario, the destination thinks that it’s communicating with the proxy and isn’t aware of your existence, but the proxy is. In this scenario, it’s very difficult to trace your existence. The exit node is the only source that the destination server communicates with. Added to this, each node adds its own layer of encryption, hence the term “onion” routing. You can see a clear depiction below. 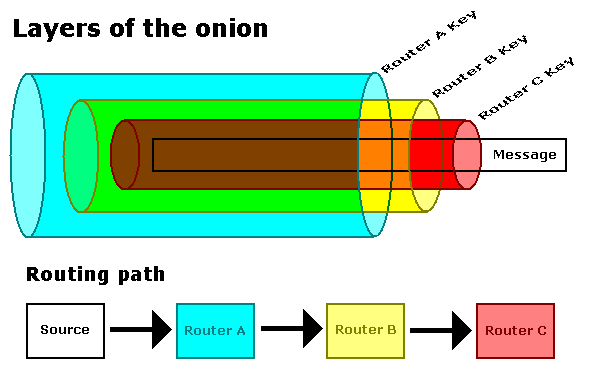 Our Test Of OR vs. Free SOCKS5 Proxies

While people may speculate that OR is slower due to the longer paths that packets have to take, it seems that OR is significantly faster than most freely available SOCKS5 proxies. The majority of proxies operate at less than 1 megabits per second. Compare that to the 5 to 6 megabits per second on average that OR usually delivers.

The fastest paths are mostly from ORs within the same country, but that’s not necessarily a rule. For example, using an endpoint from the US in a computer in Romania, I was able to download at 2 megabits per second. You’ll notice a jump in speed and reliability when using OR nodes. However, I can’t guarantee its reliability against a commercial proxy. We’re only comparing OR to free proxies that usually host many connections simultaneously.

Proper Uses For OR

You can do basically anything with OR that you can do with a proxy. You can use your email client, your browser, your P2P program, and other applications with your OR proxy configured. The uses are endless, and OR actually can be configured to work with any number of protocols. Everything you need to communicate on the Internet privately can be done with the proper OR client.

In Windows, perhaps the most powerful client you can use is AdvOR (also called “AdvTOR”). 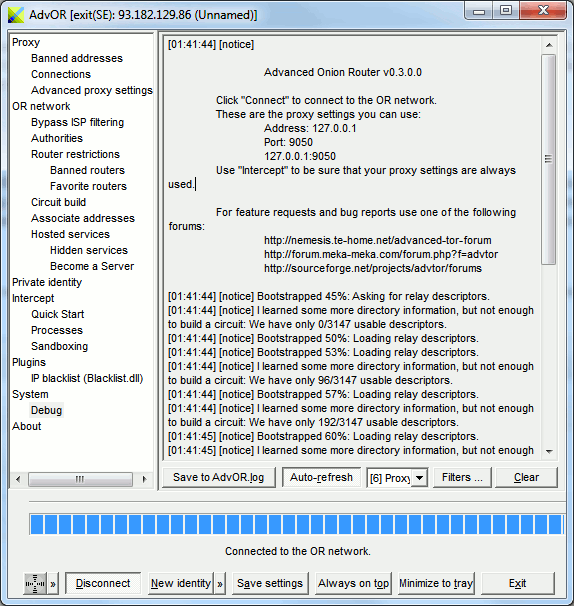 Its name is short for Advanced Onion Router. This piece of software not only allows you to connect to the OR network impeccably by a swift click of the mouse, but it also works very well out of the box, eliminating the need for you to configure very much. You can just open the program and configure “127.0.0.1:9050” as the proxy on any application you want to use. Added to this, AdvOR has the ability to hook onto applications that don’t give you the possibility of configuring a proxy. Highly stable and very robust, AdvOR has everything you need to browse the Internet privately without ever having to expose yourself.

For Linux, there are many pieces of software. You can read our guide on MTE about installing and using TOR in Linux.

Let’s Hear From You!

If you have an awesome OR client that you think others here could really benefit from, please leave a comment below. Also, don’t hesitate to comment if you have questions about AdvOR. We’ll be discussing it more in later articles.

Easily Make Tor Faster with These Tips
How to Access and Browse the Dark Web
Understanding the Difference Between a Proxy and a VPN
How to Install Tor Browser to a USB Drive and Surf Privately Wherever You Are
Everything You Need to Know About Tor’s Messenger System
Surf Privately and Safely with Tor Browser. No Installation and Configuration Required.
Can Tor Really Protect Your Online Privacy From The NSA (And Other Government Organizations)?
How to Secure Your Torrent Downloads