When I first saw a levitating Bluetooth speaker earlier this year, I was just as amazed as many others. I really did think it was some kind of magic trick. However, I soon realized that it levitates thanks to the magic of…. magnets. Yet it’s still cool, right?

Unfortunately, I’ve heard a lot of negative feedback about these speakers, and it did lower my expectations a bit. Many find that it’s just too hard to get the speaker to actually levitate. After trying one for myself, I found that the first time was the hardest, but each time after that gets easier.

Many have also complained about the sound quality. Personally, I’ve really enjoyed the sound of the Moxo X-2 levitating Bluetooth speaker and can listen to it for hours. My expectations were nearly redeemed after using this speaker for just a few hours; it’s just as cool as I thought.

What’s Inside the Box

Both the speaker and the base have magnets that push against each other, thus causing the speaker orb to levitate and even spin. Getting the actual speaker orb to float above the base is not as easy as I thought it would be, though. It takes some practice and patience. The first time it took me a good five to ten minutes to get it right. Now it takes under a minute each time.

To get started you must put the base on a flat horizontal surface. Next, you have to connect the AC adapter to the base; it will not work if it’s not plugged in. You’ll notice four red LEDs around the base; these are there to guide you so that you know when the orb is in the right position.

You’ll want to hold the orb with both hands when first starting out because the magnets are very strong and will easily pull it out of your hand if it’s not lined up properly. As you approach the base with the orb in your hands, you’ll feel the magnetic pull, and the red LEDs will start to blink and flicker. It’s really convenient to have these LEDs guide you in the right direction.

You may even see one or two LEDs lit while the others are not. Once all of the red LEDs are lit and not blinking or flickering, you’ll know that the orb is in the right position and you can let go. Plus, you’ll just feel it as you’re holding the orb above the base. It’s hard to explain, but once you try it for yourself, you’ll “get it.”

Now that the speaker orb is levitating, you can give it a very gentle spin, or sometimes just touching it lightly will work. You don’t want to do this too hard because the speaker loses its balance fairly easily, and then you’ll have to re-position it above the base which can take quite some time if you have a hard time with this process.

I created a quick video below to show how the speaker looks when it’s levitating and spinning. At the end I also show how to position it, and you’ll see how the four LEDs help to keep you on track. 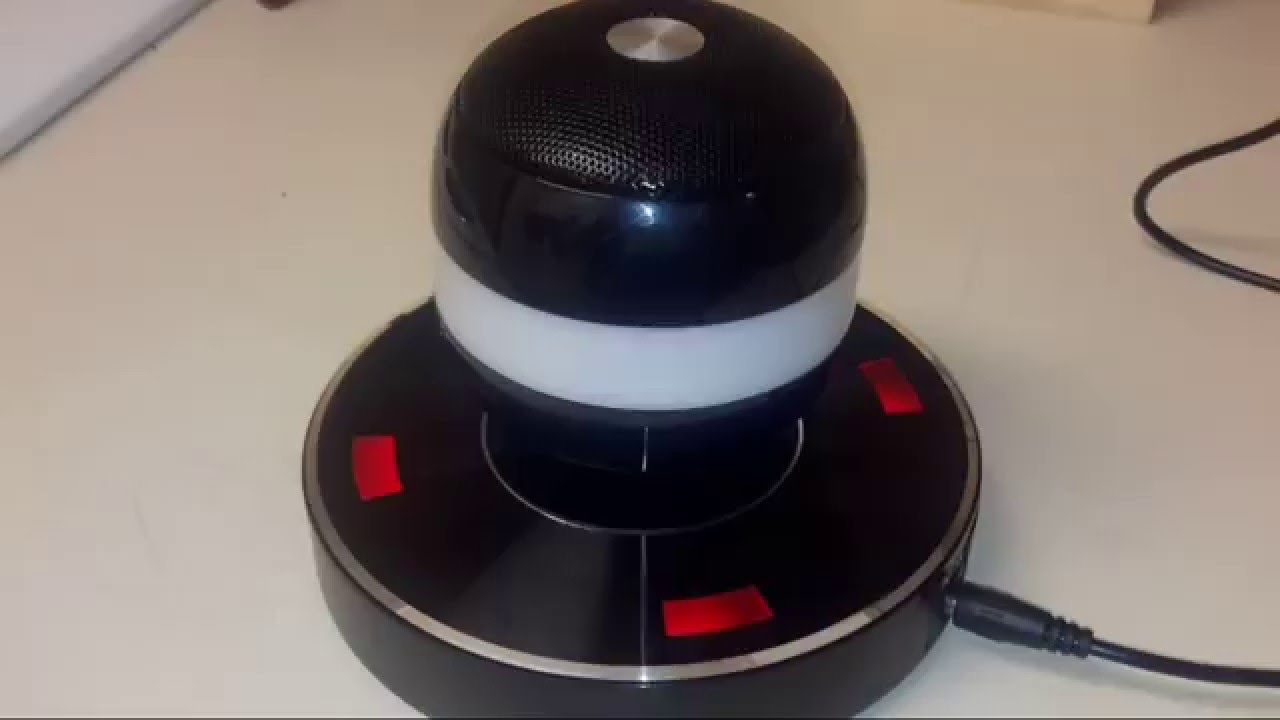 Setting Up and Using the Speaker

You can pair this speaker as you would any other – by turning on the speaker, turning on your Bluetooth, and lastly finding and connecting to “CXF02.” If you want to pair it with another device, you can press and hold the Bluetooth pair button for three seconds. It will stop pairing with the current device and wait for a new device to be paired.

The main selling point of this speaker is the fact that it levitates (or floats, if you prefer). Because of that, you won’t find much functionality on the actual speaker since you can’t touch it while it’s levitating; it will just fall off balance if you do that.

On the speaker, you’ll find two buttons: a power button and a Bluetooth pair button (which is also used to change the LED mode). There’s also a micro-USB port for charging the speaker orb. It’s simple.

There aren’t any navigation buttons; all of this will have to be done via your device. It may be a little inconvenient when you think of the reason for a Bluetooth speaker in the first place, but you also have to remember that this speaker is mainly for show.

The speaker also features six LED light modes which can be cycled through by pressing the Bluetooth pairing button. This isn’t referring to the LEDs on the base; it’s referring to the white strip you see around the speaker.

I also want to point out that the base itself features a USB port which can be used for charging the speaker orb or any other mobile device. It’s handy because you don’t have to have a USB charging port or USB adapter close by; you can simply use the base. Best of all, you can continue using and levitating the speaker while it charges; it doesn’t have to be levitating when charging, though.

The speaker quality itself isn’t the best in the world, but it’s still above average. There isn’t a lot of bass, but that’s probably due to the style of the speaker – extra bass and levitation doesn’t seem like they’d mix too well. The volume level of the speaker will depend on your actual device since there are no volume buttons on the speaker.

Like I said, the speaker is really just for show, and it does a great job of that, especially with the LED modes. It would be great for a special event or party and also looks really cool in a dark or dimly lit room.

Just be sure that it’s not located in a place where it will get bumped or shaken a lot. The base itself is very sturdy, but the speaker orb isn’t as lucky due to the magnets; it has to remain in the right position at all times.

Thanks to Moxo, we have one speaker to give away! This giveaway event has ended.

The winner has been notified of her winning.

How to Install macOS in VirtualBox

How to Install Windows 11 on a Raspberry Pi 4
6 of the Best Super Portable USB Flash Drives
9 of the Best Alternatives to Apple’s Magic Keyboard
How to Troubleshoot MiFi Connection Issues
Is an eGPU Worth Buying in 2022?
Which Parts Should You Salvage from a Laptop?
What Is a GaN Charger? 5 of the Best GaN Chargers You Can Buy
How to Choose the Right CPU Cooler