Maybe you like OSX, maybe you want a quick place to launch and manage applications, maybe you just want a little eye candy. Whatever the reason, many of us like to use a dock on our desktop. As with most Linux software, there’s no shortage of options and not a lot of clear information on the benefits of each. Some can handle compositing, some can be placed anywhere on the desktop, some can be configured on the fly while others need a restart. We’ve gathered five of the best docks for Linux to see how they stack up against each other.

This is a fairly simple, no-nonsense dock. It includes icons for launchers as well as running applications, and will resize appropriately when items are added or removed. SimDock is quick and easy to get running, but somewhat lacking in configuration. SimDock is one of the few items on this list that requires a restart for most changes. If you don’t need anything fancy and just want a quick, slick dock, SimDock might be a good way to go, because it does not require 3D acceleration or compositing but still looks nice.

AWN is among the more well known docks, and for good reason. It’s extremely configurable, nice looking, and interactive. The dock can be placed at any point along the edges of your screen. AWN has applet support for things like the CPU monitor shown in the screenshot above, and there are packages such as awn-applets-c-core and awn-applets-python-core in the Ubuntu repositories to add functionality to AWN.

Docky is a part of the Gnome Do application launcher. It’s a fairly minimal but supports some useful applets like a Gmail checker and media player controls. We’ve covered Docky a bit previously, but it is now available as a standalone download and does not require the complex setup.

Cairo Dock may be the most advanced on the list when it comes to flexibility. Cairo comes with an extremely detailed configuration utility and several useful applets like a mini terminal, desktop pager, system monitor and more. It can run in a fully accelerated OpenGL mode and provide some impressive effects.

Kiba’s big claim to fame is the physics engine behind it. If you can get it working, you can get some great effects, as seen in this video. 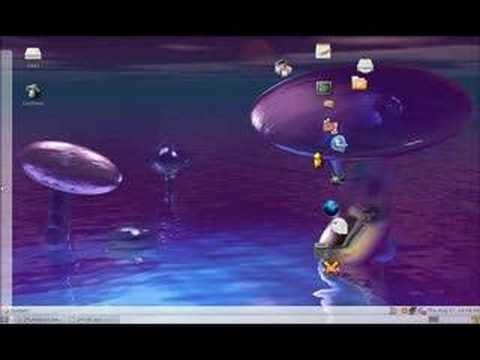 The reason I said “If you can get it working” is because Akamaru, the software behind the physics, can be rather painful to compile. Since Kiba Dock does not seem to be actively developed, this isn’t likely to change in the near future.

Even without the physics, Kiba is still a perfectly functional dock. It doesn’t have the applets or plugins that other docks have, but it makes a simple, beautiful application launcher.

All the options shown here have valid uses, and some may fit your situation better than others, but AWN and Cairo appear to lead the pack in power and flexibility. Both provide far more than a basic application launcher and can actively increase your productivity. If you’ve got any other recommended docks, let us know in the comments!

How to Copy and Paste Text, Files and Folders in Linux Terminal

How to Set Up Bluetooth in Linux

How to Combine Multiple PDF Files With PDFtk

LXDE vs XFCE: Which Is the Better Lightweight Desktop Environment?

How to Play Android Games on Linux

How to Move from Windows to Linux

How to Enable Fractional Scaling in Ubuntu 20.04

How to Record System Sound on Linux

Budgie Desktop Review: A Beautiful Desktop that Looks Like Gnome