Mac OS X users enjoy a slick Apple utility called Time Machine, while users of the latest Microsoft OS have Windows Backup. My install of Kubuntu Precise, oddly enough, didn’t come with a back-up utility installed out of the box. But, as always, we Linux users have a variety of options to choose from. Being the diehard KDE fan that I am, I looked for something that would fit in with my desktop, and settled on Backintime. Here’s a review.

Like most applications in an Ubuntu-based system, installing this couldn’t be any easier:

For you “mainstream” Ubuntu fans, there’s also a GNOME-based version of this:

In another weird turn of events in my Precise system, the installation didn’t create an entry in the menu for this (it appeared under the “System” menu in Oneiric), but a quick command in KRunner did the trick:

Once the application is launched, configuring it is reasonably straightforward. The main screen lists all the backup’s (Backintime calls them “Snapshots”) you’ve taken in the past (the column to the left in the figure below), a couple shortcuts (the top of the center column), a list of folders currently set to be backed up as a Snapshot, and a list of folders on your machine in the right column. 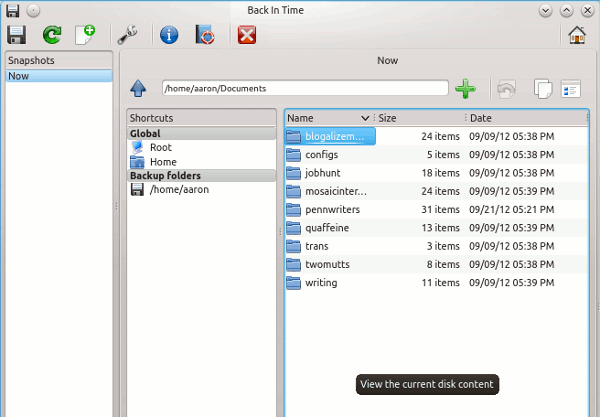 To configure your backups, click on the wrench icon in the main toolbar, which will display a configuration screen. Backintime has you create a “profile” that contains all the settings it needs. The dialog will have a profile (called “Main Profile”) already created when after you launch the app for the first time, but you can create different ones by using the “Add” button at the top of the dialog box (“Edit” and “Delete” should be self explanatory). The first tab of the dialog asks you to select where your Snapshots will be stored (I’m storing mine on an external hard drive), and at the bottom if you’d like to have backups scheduled to happen automatically… there are a couple different options. 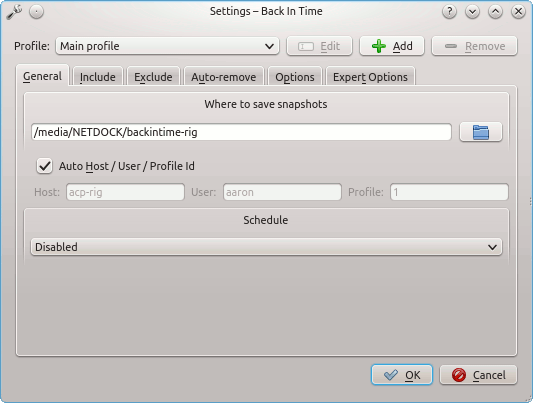 The “Auto Host/User/Profile Id” checkbox is best left selected, as it will let Backintime handle the creation of some folders. What these fields mean is that my Snapshots will be stored in “/media/NETDOCK/backintime-rig/acp-rig/aaron/1”.

The next tab allows you to specify files and folders to be included in the Snapshot using the “Add File” and “Add Folder” buttons. I’ve included my entire home directory in the screenshot below. The third tab allows you to exclude folders in the same way. Backintime will fill this in with some reasonable defaults, so it doesn’t backup directories like Dropbox or Ubuntu One (which are already backed up in the cloud), temporary files, and backups of other backups (although you may still want these. 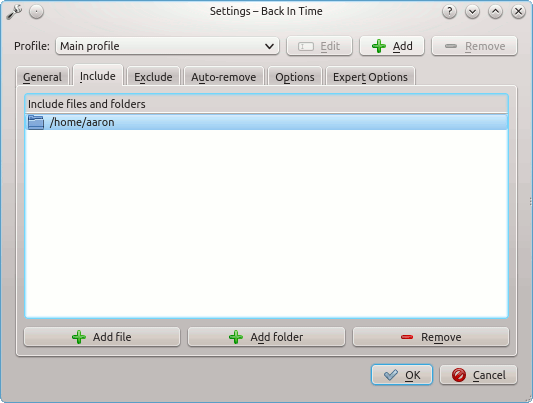 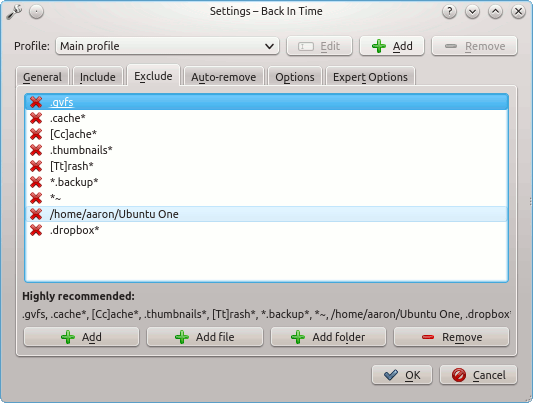 The fourth tab, “Auto-Remove,” lets you configure how many Snapshots you’d like to keep, and for how long you’d like to keep them. The “Options” and “Expert Options” let you set some minor configurations, like whether you’d like notifications when Backintime runs, but you’re safe leaving these as-is. Click “OK” to save your profile. 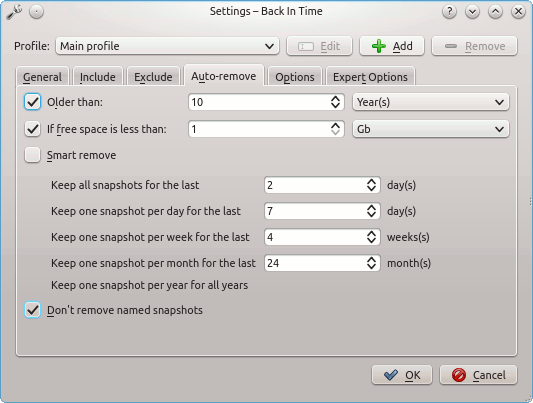 Once you’ve configured your profile, you can take your backup one of two ways:

Backintime is a great example of how free software can be combined (in this case, Backintime is a combination of software including rsync, cron, the backintime core files, and a KDE interface) to create something more user-friendly than the pieces on their own. Certainly, a casual (or even intermediate user) will have a much easier time configuring backups for his/her system than with something like rsync alone.

That said, the interface is a little cluttered and confusing. The lists of folders on the main screen make me assume you can use them to configure a backup, e.g. via drag-and-drop, but this isn’t the case. The list of folders on the right of the main screen might appear to be simply there for reference (with an option to copy the current path, presumably to paste it into one of the tabs in the config screen), but they’re also there so you can view the differences/changes between Snapshots at the folder level. The Restore button is tucked in among four buttons, none of which are particularly well labelled. As a result, it’s probably easy for most users to configure the backup, but restoring all or part of those backups will be more frustrating.

However, it’s ability to take scheduled backups with no interaction from the user make Backintime a perfectly usable, if not completely intuitive, solution to make sure all the files on your Linux box are safe.