In the market for a new smartphone? This low-budget smartphone by Leagoo might be just your speed. The Leagoo Alfa 1 is a Chinese smartphone that prides itself on being one of the thinnest phones in the industry. For a budget phone it has some very useful features and impressive specs. It comes with Android 5.1 installed and includes 2GB of RAM and 16GB of internal storage; it’s also unlocked for worldwide use.

Due to its 5.5″ screen, it’s considered a phablet and functions well as such. While testing I found myself using it much more than my 10.1″ tablet (and I’m an avid tablet user who actually prefers a tablet to a smartphone). The large screen size is perfect for viewing web pages, casual gaming, and texting (my main activities).

The Leagoo Alfa 1 is available in three colors: midnight black, galaxy white, and rose gold. Here’s a closer look at the Alfa 1 and all that it has to offer as a low-budget Android smartphone.

Inside the box, you’ll find the Leagoo Alfa 1 neatly packed along with:

If you’re already familiar with Android, specifically Android 5.1, then you will have no problems setting up and using this phone. It does have some added features from its own Leagoo OS 1.1, but these features are easy to learn and use. The video below will introduce you to Leagoo OS’s beautiful, flat design and some of its main features. 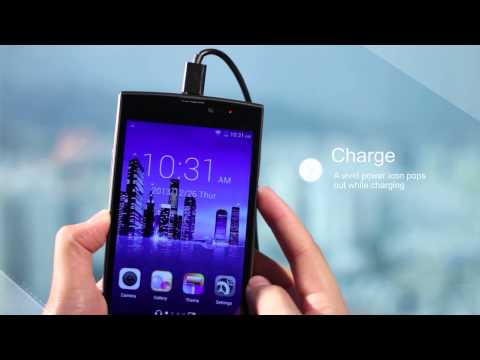 Setting up the phone was a breeze until it came time to activate my SIM card. The phone is unlocked to work with GSM and WCDMA networks worldwide. The carrier that I was using (Virgin Mobile) is CDMA, and after extensive research and numerous support tickets I found that this phone could not be used with Virgin Mobile or another popular CDMA network: Verizon Wireless.

Luckily, I already wanted to switch carriers anyway, and since I plan on purchasing an unlocked smartphone in the near future, it just made sense for me to make the switch. So, I transferred my number to a compatible GSM network (this was the easiest option for me).

To make a long story short, getting this phone working with your particular carrier may be a nightmare. Your best option will be AT&T, T-Mobile, or Straight Talk.

I’ve never been a fan of square edges on a phone, but I did fall in love with the rectangular design of this one. It does seem more feminine due to the look, especially with it being rose gold. Plus, you can’t deny how gorgeous the narrow bezel is. From the slightly curved back to the glowing home button, everything on the Leagoo Alfa 1 comes together to create a truly sleek smartphone.

Speaking of the buttons, I love how the home button illuminates and has a “breathing” feature (can be disabled in settings) that allows it to constantly glow even when the screen is off. The menu button (on the left side) and back button (on the right side) only illuminate when you touch them and automatically go off when not in use after around ten to fifteen seconds.

The titanium body of the phone is very strong and durable. It has a dotted design that looks like it is highly textured; however, it’s rather smooth to the touch. The phone itself is lightweight and fits nicely in my hand. Since I do have small hands and the phone is on the large side, I almost always have to use two hands to actually operate it. That doesn’t bother me, but I know that some people do like to have the ability to use their phone with one hand.

The speaker, which is on the back of the phone, runs across the bottom and is a decent size. It may not be the best position for a speaker, though. It can get loud, but if you lay the phone flat or happen to have your hand covering the speaker on the back (while holding), it can really muffle the sound and decrease the volume. Of course, that’s nothing a Bluetooth speaker or headset can’t rectify if necessary.

The front-facing camera is in a good location on the right side while the rear-facing camera is in the center on the back of the phone; only the rear camera has a flash. The camera lens isn’t flush to the phone, but it doesn’t stick out too far, either. It’s barely noticeable and blends in well with the rest of the phone. The flash is right below it on a solid color panel. Sometimes the rear camera gets covered up by accident depending on how you hold the phone.

I found the camera quality to be really good when in natural or bright lighting; images come out crystal clear as long as you keep your hand steady. There are some great features in the default camera app like color effect, scene mode, face beauty mode, motion track mode, anti-flicker, zero shutter delay, voice capture, face detection, smile shot, ISO, HDR, and much more.

Taking pictures at night or in dimly lit areas aren’t so impressive. I had to do a lot of playing around with the flash and lighting to get decent shots in dark environments. I have a Samsung tablet with just an 8MP camera and an Amazing flash that can brighten up any nighttime or dark picture and make it just as sharp as those in bright lighting. However, this camera just doesn’t suffice when it comes to that.

I don’t take a lot of selfies, but I’m more than pleased with the quality of pictures with the front-facing camera, again, in bright and natural lighting. There isn’t a flash on the front, so obviously you shouldn’t even attempt it in dark or dimly lit areas. Overall, I think the camera is amazing as long as you have ample lighting.

The Leagoo Alfa 1 comes with the Google Play Store pre-installed, so you can download apps just like you would any other Android phone. From there the possibilities are endless as long as apps are compatible with Android 5.1.

In my experience with Chinese phones, I’ve found that even though some do have SD card support, you can’t always move apps to the SD card (there isn’t an option for it). Luckily, you can move apps from the phone to the SD card with this phone, which helps to free up space. I also love that the phone doesn’t come pre-installed with the rest of the Google apps gang.

On the flip side, though, Leagoo does have a few of its own pre-installed apps that are kind of useless (at least, to me) and can’t be uninstalled such as Opera Max, BeautyMakeup (enhance photos), FM Radio, HotKnot (transfer files), Leagoo Launcher (can be replaced with another launcher), Leagoo Market, Sound Recorder, and Xender.

I feel like I’ve barely scratched the surface of this phone; there are so many more features to be discussed! Here are some Pros and Cons to give you a better idea of those useful (and not so useful) features.

To my surprise, I can’t say enough good things about the phone. Sure, it’s no Samsung Galaxy, LG, Nexus, or Motorola Moto, but it looks great, has a brightly colored display, performs well, and won’t put a dent in your wallet.

Thanks to Leagoo, we will be giving away one Alfa 1 Android smartphone in rose gold. This giveaway event has ended.

The winner has been notified of her winning.

How to Reset Your CMOS and Why You Might Need To

Band Steering: Should 2.4GHz and 5GHz Be One Network or Two?

How to Measure Your PC's Power Consumption

How to Uninstall Bloatware and System Apps without Root in Android

How to Get Samsung Keyboard Back to Normal
How to Fix the Android Screen Rotation Not Working Issue
DD-WRT vs. Tomato vs. OpenWRT: Which Router Firmware Is the Best?
7 Must-Have Reminder Apps for Android
How to Insert Data From Picture on MS Excel on Android
6 of the Best Cryptocurrency Tracker Apps for Android
The Best Mobile Apps to Create a Video from Photos
How to Cast YouTube from Your Phone to Your PC