Cars have the potential to be made far safer with the careful application of real-time video cameras. Backup cameras are the perfect example of how a well-placed camera can make cars safer and easier to drive. Cameras could also make checking your blind spot easier and safer. The Lanmodo Vast night vision camera system uses a front-facing camera and smart image processing to provide greater visibility for drivers traveling during the night.

I have a subjectively difficult time driving at night, but I’m often forced to do so. Fundamentally, it’s harder to see at night by definition. While streetlights are supposed to make driving safer, they don’t make it as safe as driving during the day. Indeed, how could they? They’d need to be as bright as sunlight, and no one would stand for that level of persistent illumination.

So by definition, driving at night is not as safe as driving during the day. The stress of being extra-observant at night to avoid accidents has made night driving a neurotic mess for me. So I found the idea of this product appealing. It uses basic technology in a clever way to produce a product that could materially improve my life. It’s everything I like about technology.

The Lanmodo Vast night vision system uses a front-facing camera for the source image. This camera appears to be a typical commodity lens of the style used on CCTV cameras. It sports a 36-degree angle of view, which we found captured a range far beyond what is visible with headlights. The image is zoomed such to a point that it focuses on distant objects, out to about 300 meters or nearly 1000 feet.

In addition to bringing distant objects closer, the Vast’s camera is designed to improve low-light visibility. The image must then be processed to reveal objects in the otherwise-dark field. This image is then displayed on the screen mounted to the back of the camera. It’s an 8.2-inch, 1080p HD display, which displays a bright, clear image to the viewer.

From a high level, the Lanmodo Vast’s night vision works by “photoshopping” the camera’s image in real time, dramatically improving the detail visible in the picture. While this doesn’t create an image that’s visually appealing, it is more than detailed enough to spot hazards on the road.

The system uses basic image processing that amplifies the electrical signal from the camera, called the “gain,” which makes the image brighter. This brightening isn’t free, however, and the amplification also significantly degrades image quality. That is why it isn’t much use for if you’re looking for beautiful video.

But if you’re looking to detect a distance vehicle nearly 1000 feet away in the dark, this gain amplification is more than sufficient. We found that, even in deep darkness, the Lanmodo Vast was able to produce a clear image of the objects in the image. It’s clear enough to see cars and people and anything else that may be in your path.

It’s verifiably true that the screen shows you objects you couldn’t otherwise see. It’s easy to spot vehicles or obstacles in the image, even when those vehicles are simultaneously in streetlights, thanks to the zoom.

And when driving on a dark country road where high-beams can draw out deer, the Vast reduced my normally tumultuous anxiety about a collision with a deer to a low murmur. I quickly came to rely on it while driving, even in adequately-lit night-driving scenarios. The Vast made me feel safer because it improved my senses. I felt like a cyborg driving around with computer-powered super vision, or like Knight Rider.

The camera system can also be used without the night vision enhancement in other low-visibility conditions, like rain, fog, haze, and mist.

The one complaint that could be lodged against the screen is that it is much brighter than the road. It’s not so bright that it’s blinding or unpleasant. But looking at the screen for extended periods, as you might while at a red light, does temporarily reduce your night vision in very dark areas. But the overall effect was not much worse than that of a backup camera or, for an always-on example, a smartphone’s navigation display. Glancing at the display didn’t damage our ability to drive or see what was happening around us.

The device’s fit and finish is high quality, with physical buttons to drive the interface and smooth plastic surrounds. The direction of the camera assembly on the back of the screen is adjustable, making it easier to aim the camera properly. 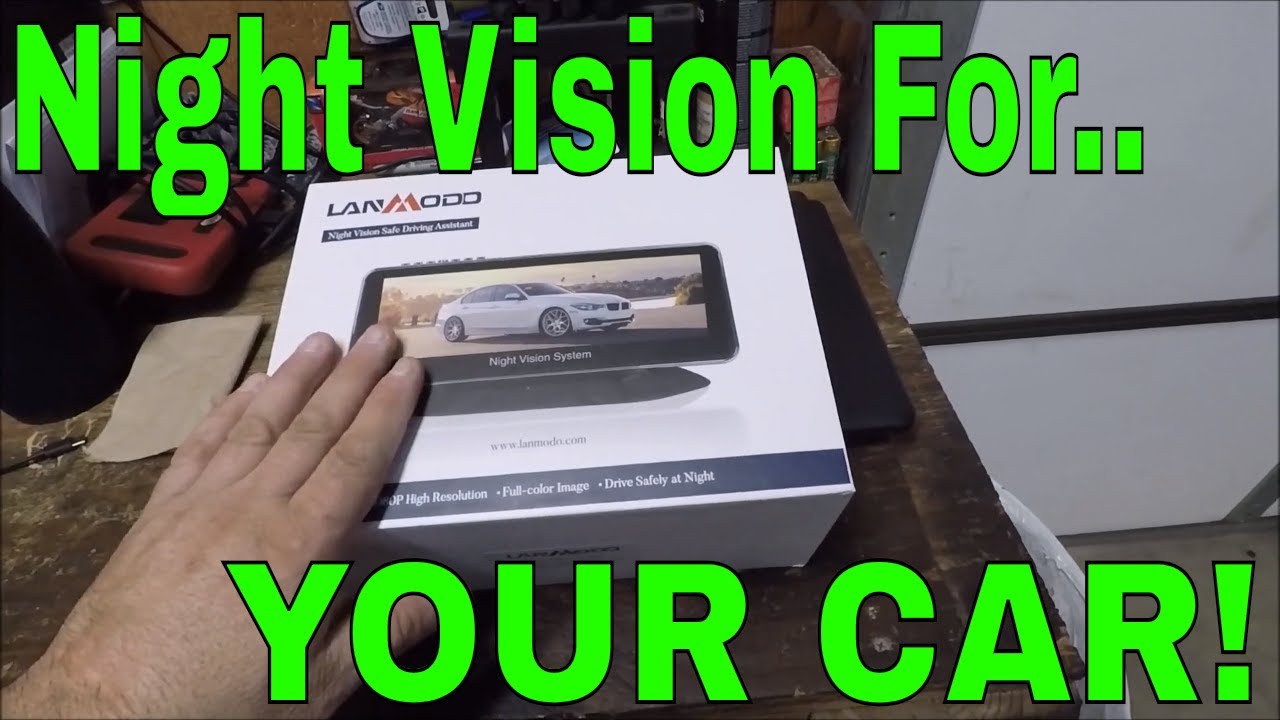 The mount point at the bottom of the device is well-positioned, indicating a thoughtfulness of design. The suction cup mount included with the Lanmodo balances naturally based on the weight of the system. With the suction cup engaged, the mount shows only moderate movement. The suction cup attaches best to smooth glass but also works on a smooth dashboard. If you’re securing the device to the dashboard, a broader base is also included with a sticky base that adheres to your dashboard. This keeps the device from sliding around too much in use. It’s the right size to be held in a clamp-style GPS or smartphone mount, though the device is heavier than a typical smartphone and might sag.

The device can be powered through the included OBDII adapter or 12V cigarette-lighter style power adapter. Both methods power the device effectively, and it’s about securing an effective cable-routing plan. The 12V adapter has approximately a four-foot power cable attached to the plug, while the OBDII port has about two feet of cable attached.

The display can also be connected to a Lanmodo rear-facing backup camera which wasn’t included with our product. You can toggle between the front and rear facing cameras with a hardware button on the top of the Vast’s display.

The Lanmodo Vast night vision system offers a tangible, measurable improvement detecting distant objects in the dark. By revealing what the darkness hides, you can drive at night more confident in your safety and less frightened by the dark.

How to Install macOS in VirtualBox

How to Install Windows 11 on a Raspberry Pi 4
6 of the Best Super Portable USB Flash Drives
9 of the Best Alternatives to Apple’s Magic Keyboard
How to Troubleshoot MiFi Connection Issues
Is an eGPU Worth Buying in 2022?
Which Parts Should You Salvage from a Laptop?
What Is a GaN Charger? 5 of the Best GaN Chargers You Can Buy
How to Choose the Right CPU Cooler