Jailbreaking your iPad is, in a word, simple.  In two words, it’s ridiculously simple. But why do it? And how? I’m here to answer all your questions! So let’s get started!

Why should you Jailbreak?

Well, jailbreaking your iPad offers you tons of features and opportunities that you are otherwise not afforded. It gives you the ability to download non-App Store apps on to your iPad, which can increase abilities offered by a stock iPad by leaps and bounds. From multi-tasking to running widgets, to changing the way you interact with your home screens, jailbreaking offers many possibilities that would otherwise be impossible. I’ll get more specific later, but for now…

How do you do it?

This is the best part… With a simple desktop application called Spirit Jailbreak, it’s easy enough for your Grandma to do it in under 10 minutes.  First, head over to www.spiritjb.com. Once you get there, you may want to read up a little. If not, or if you already have, scroll down the page to the Download section, and download your version. As it’s downloading, go ahead and plug your iPad into your computer. Once the download finished, run the application. Here’s what you’ll get:

Click the button, and you’re all done! Your iPad will restart automatically, and you’ll now see the Cydia app store on one of your home screens. Touch it, and you will be brought to Cydia’s home. From here, you can check out their featured packages, as well as search for things you know that you want. 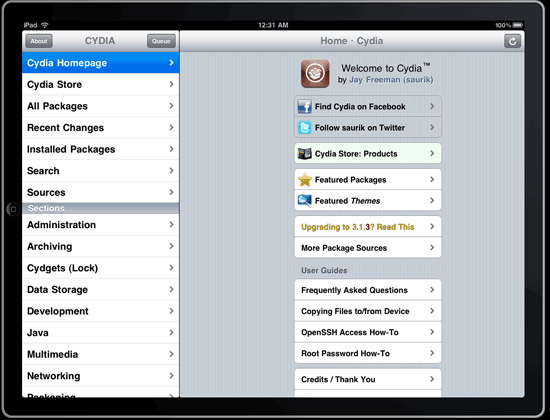 So, what should you install from Cydia?

Honestly, the answer is “A lot!” For most people though, there are a few main reasons to jailbreak. One reason would be better control over the multi-touch gestures with which you command your iPad. An app called SBSettings lets you change setting like what multi-touch gestures do when at the homescreen. It also gives you easy access to toggle certain features on and off, similar to Android’s Power Control widget.

Another huge reason is multi-tasking, that is to say, running apps in the background behind others, like your desktop, laptop, or several smartphone models can do. To accomplish this, just install Backgrounder. This will install in a couple of minutes, your iPad will restart, and anytime you want to not close an app, but let it continue to run in the background, you just tap and hold the Home button on your iPad. 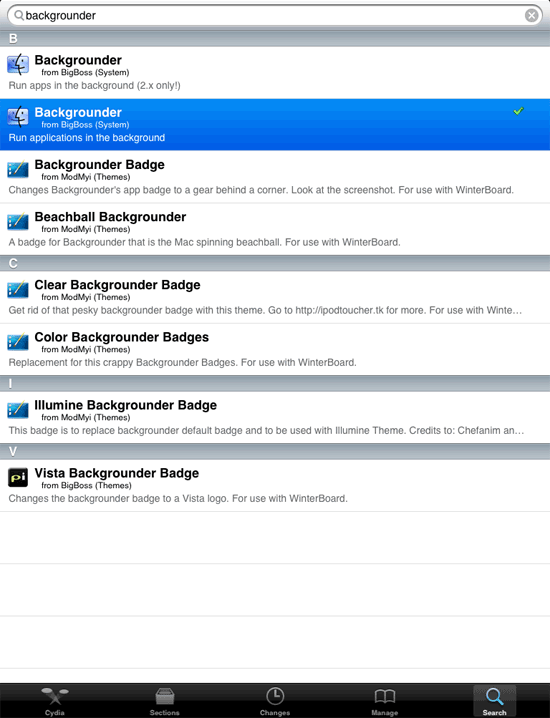 On top of both of these features, there are countless other useful ones, including Wifit Tethering for the 3G iPad, theming your iPad, using one of several theme apps in the Cydia market, and tons of other useful tools. Additionally, there are tons of fun games and such that are only available on Cydia, like an SNES Emulator that allows you to download ROM’s in game!

So what are your favorite uses for a jailbroken or stock iPad? Most importantly, what is it still missing that might get you to jailbreak if you’re on the fence?  Sound off in the comments!

How to Access Network Files From Your iPad
Do You Root or Jailbreak Your Phone?
How to Find Lyrics For Your Songs On iPad
Can an iPad Take the Place of a Computer?
iChromy Web Browser For iPad – For Those Who Prefer Google Chrome
How to Create Slideshows On The iPad
How To Turn Your iPad Into An Alarm Clock – For Free!
Flipboard: A Must-have Social Magazine App For iPad