G Sync – everyone’s talking about it, everyone wants it, but does everyone know what it actually is? Nvidia’s not-so-secret weapon in the gaming arms race is cheaper to get your hands on now than it was a couple of years ago, so it’s a good time to do a little reflecting and ask whether it’s finally worth investing in 2019.

Here’s everything you need to know.

How Does G-Sync Work

To understand G-Sync, we must first understand V-sync and its limitations.

You’re probably familiar with a little something called V-sync. (We wrote a whole article about it.) What this does is limit the frame rate of a game to the refresh rate of your monitor. So if you have a 60hz, 75hz, or 120hz monitor, frame rates on a game will max out at those. This is crucial to prevent screen tearing – choppy lines that appear on your screen during gaming when the GPU is rendering frames at a different rate than the monitor buffering them.

But there is a tradeoff for V-sync. Computers these days line up images to send to the monitor using double- and triple-buffering – essentially preparing one or two frames while another is displayed on the screen. To prevent screen tearing, v-sync causes tiny delays in the buffering process to make sure that the monitor is ready for the next frame, which can cause input lag.

Additionally, if you’re only using double buffering (as is the case with most games), then you might witness big FPS drops. (This is only an issue if your graphics card isn’t powerful to output at a constant high frame rate in a given game.)

Well, that was a long preamble, but it makes explaining G-Sync much quicker.

A G-Sync capable monitor is capable of outputting VRR (variable refresh rate), constantly adapting to your Nvidia GPU’s frame-rendering rate (G-Sync is an Nvidia technology, so it’s exclusive to Nvidia graphics cards). This completely eliminates screen tearing because the frame-rendering rate of the GPU never exceeds the refresh rate of the monitor, negates the kinds of sharp FPS drops you see with vsync, and reduces input lag because the monitor is no longer holding up the buffering. 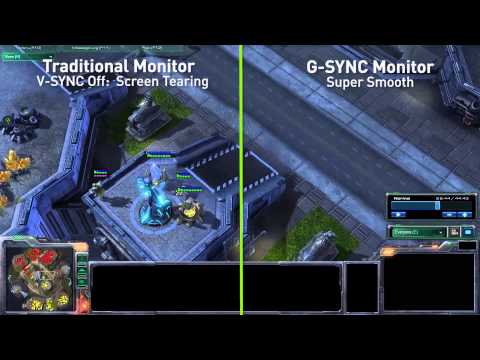 Is G-Sync Worth It?

First, it depends on how hardcore a gamer you are and what kind of gaming you do. G-Sync creates a perfect marriage of low input lag and more consistent, tear-free performance, but it’s possible you’re not really suffering from these issues anyway.

If you have a top-end graphics card with regular vsync enabled, then you’ll get the performance and stable frame-rates you want even on a non G-Sync monitor. You may suffer from increased input lag/latency, but the extent of this depends on your monitor. Manufacturers tend not to advertise input lag for their displays, but this handy website may help you find out the latency on your monitor.

Nvidia made a welcome move recently to make G-sync more accessible to gamers. In January 2019, Nvidia announced that it would release a driver update that would make its GPUs capable of working with FreeSync monitor. FreeSync is basically AMD’s G-sync equivalent, but now that this patch is out, you won’t need to use an AMD GPU to take advantage of a monitor containing the FreeSync adaptive refresh rate technology.

Business-wise it makes sense for Nvidia to do this, as consumers won’t be channeled towards buying AMD GPUs for their FreeSync monitors. But it’s also good news for consumers, because FreeSync monitors tend to be much cheaper than G-Sync ones, so the point of entry to set yourself up with G-Sync becomes cheaper.

Nvidia’s only declared 12 existing FreeSync monitors to be officially G-Sync compatible so far, but that number should increase very quickly. Keep an eye out for the ‘G-Sync Compatible’ label from now on.

The accessibility of G-Sync has increased significantly in the last year or so. Even cheap, low-end Nvidia GPUs (if it’s a GeForce GTX 650 Ti or later, it has G-Sync) are capable of G-Sync, and the fact that more and more FreeSync monitors are becoming G-Sync Compatible makes it a great time to keep your eye on the market.

If you have a high-end GPU capable of stably maxing out your monitor refresh rate, then you’re in the bracket of people who’ll least notice the difference when you upgrade to G-Sync. If, however, you have a G-Sync capable GPU and are thinking of upgrading your monitor anyway, then a G-Sync (or FreeSync) monitor is an absolute no-brainer.

The question of whether G-Sync (or its AMD cousin, FreeSync) is worth it will be a moot point for gamers in a couple of years time. All new GPUs made by Nvidia now have the tech onboard, and monitors that feature the tech are getting cheaper and cheaper.

If you’re a committed gamer, an Nvidia GPU owner, and want to improve these quality-of-life issues like screen-tearing and input lag, then now’s a perfectly affordable time to jump onboard.

How to Cool Down a High CPU Temperature

How to Boot Raspberry Pi 4 From USB

USB C vs. USB 3 vs. Thunderbolt: All You Need to Know

Raspberry Pi 4 as Desktop Computer: Is It Really Viable?

How to Install Ubuntu on Raspberry Pi

How to Disable Wi-Fi Protected Setup (WPS) in Your Router