Even though Gnome 3 (aka Gnome shell) is still in beta, it has sure garnered a lot of attention from both Linux enthusiasts and power users. Most of us who are not happy with Ubuntu unity tend to install Gnome 3 (or try out Fedora) and see how it fares against the Unity desktop. If you are one of those who wanted to try out Gnome 3 on your Ubuntu, but don’t want to deal with the compilation of code, here’s how you can install it easily via a PPA.

Open a terminal and type the following command:(only applicable for Ubuntu Natty 11.04.)

Restart your computer. At the login screen, select Gnome as the desktop session.

1. If you are using the Unity desktop, some of the stuff might break.

2. The font will change.

If you plan to use Gnome Shell as your main desktop manager, the following applications will be useful for you.

To install, you can either click here or use the following command: 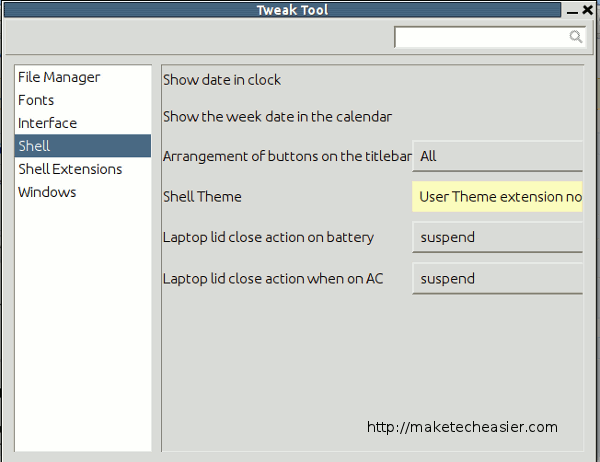 This application is a Gnome 3 extension and it allows you to disable automatic workspace and several other tweaks.

To install, download the Gnome-shell-frippery tar file and extract it to the “~/.local/share/gnome-shell/extensions” folder.

There are several other Gnome-shell extensions that you might be interested. You can open your Ubuntu Software Center (or synaptic Package Manager) and search for “gnome-shell-extension”

If you decided that Gnome 3 (or Gnome shell) is not for you, here’s the way to remove it from your system.

Gnome 3 is radically different from Gnome 2 and Unity. If you are using it for the first time, be prepared to unlearn what you know about Gnome and pick up from scratch again. There is a high probability that you will hate it the first time you use it, because it doesn’t come with most of the stuff that you are familiar with. Try it out for a few days and I am sure you will appreciate some of its features.