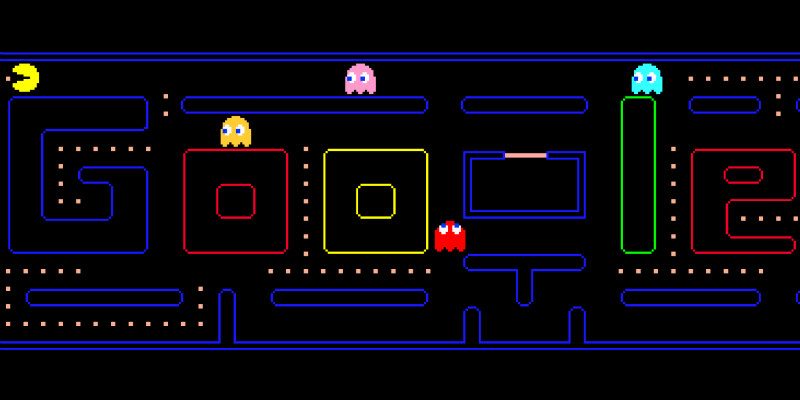 Say what you will about Google, but the old search-engine devil has some fine taste and sense of humor in its design department. Over the years Google’s amassed a veritable trove of hidden games, many of which first appeared in connection with anniversaries but continue to be available to play today.

Google’s repertoire of hidden games and easter eggs stretches across all its platforms – from Google Search to Assistant and the Google Android app. This list brings together Google’s best secret games wherever it can find them.

One of the best-kept secrets of Google’s AI assistant on Android is that it can direct you to a veritable treasure trove of games if you just ask it the right question. To do this, open Google Assistant (OK, Google), then when it’s listening say “play game”.

Once you’ve done this, you’ll be able to choose from a fairly sizable list of games to play, including quizzes, word games and rock, paper, scissors.

If you’ve been Googling for a while (and let’s face it, most of us have), then you may remember this little gem from 2012. This simple basketball game was released to celebrate the 2012 Summer Games, and involves you shooting hoops from various distance.

You just hold down your mouse button to increase the power of your throw, so it’s about finding that sweet spot to get the ball in the hoop. You have a limited amount of time to score as many points as possible, and as the game progresses you have to throw from further and further away. 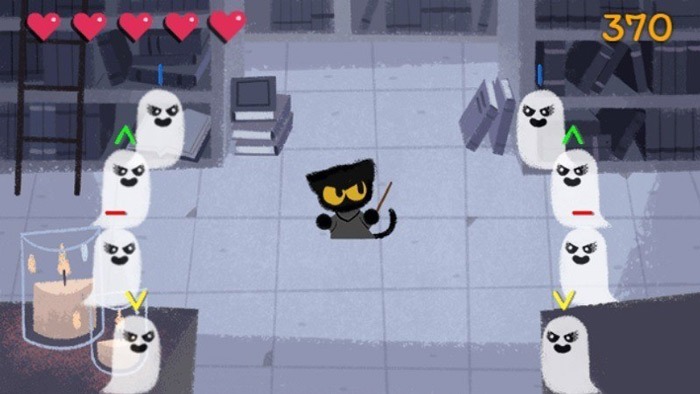 Taking us all the way back to Halloween 2016 is this beautifully hand-drawn Google game about a spellcasting cat fending off an endless swarm of incorporeal ghosties. Magic Cat Academy is super-simple, as you stand in the middle of various levels, drawing lines that correspond to the symbols above ghosts’ heads to banish them.

The action picks up very quickly, and before long you’ll be swept up in a relentless flow of spectral destruction. There are five levels in total, and you can also regenerate health by swiping a heart shape anywhere on the screen. Good luck! 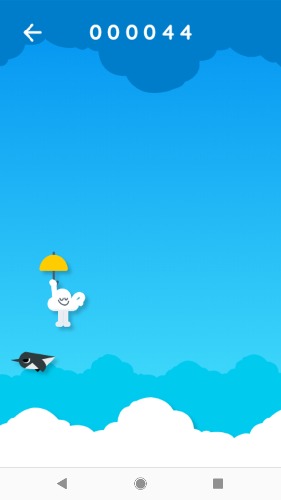 Remember Flappy Bird? Who doesn’t? The infamously simple and lucrative game where you tapped the screen to keep a fishy-bird thing airbound as it flew across the screen was a one-week sensation, before duly disappearing forever

Well, Google has come up with something similar, except much prettier-looking and with a cloud instead. If you don’t have internet, go to the Google app. Here, you should see a circular icon with a cloud inside it, and a play button underneath. Tap this icon to start the game!

Want to be transported back to the late 70s and get a feel for what gaming used to be like in the days before conveniences like graphics and UIs? Well, you can. Right there in your Google Chrome browser, in fact, where a quirky little text adventure lies in rest, waiting to be uncovered.

To access this well-hidden Google game, open Google in Chrome, then type “text adventure” into the search box.

Next, press Ctrl + Shift + I, then type “yes” in the Console that appears.

The text adventure will then begin. As with every great text adventure, you play simply by typing in commands, which unfold the action and move you through the game world.

Google’s got a lot of games in its bottomless box of tricks, but none until now have been full online multiplayer experience. Great Ghoul Duel has shades of a hyperactive Pacman, as you and your teammates glide around a moody library, graveyard and other spooky locales, collecting little flames to take back to your base. The team with the most flames wins! 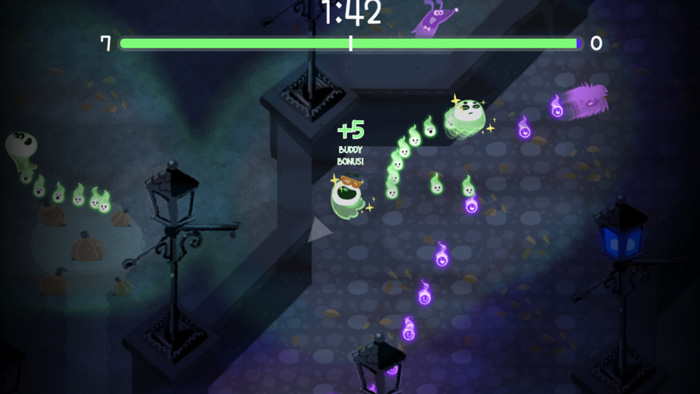 The extra hook is that when you collect the flames, they give your ghost a tail which the opposing team can then glide into, steal, and take back to their own base. You can host games and invite your friends and family to join.

It’s no longer on the Google homepage of course, but you can play it in the Google Doodle archive.

On 10th June 2018 Google celebrated Garden Day in Germany (nope, we’ve never heard of it either) by releasing a Google Doodle themed around garden gnomes (did you know they originate from 13th-century Anatolia?). 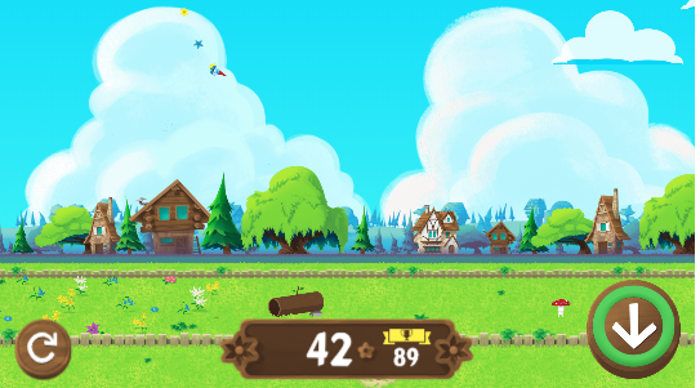 Anyway, clicking this Doodle would start a deviously addictive game where you’d catapult gnomes as far as you could using a sort of trebuchet. Sounds a bit cruel, but it’s a bit like Angry Birds really, and you never heard them complaining.

The Doodle is now gone, but you can find it in the Google Doodle archive and play it whenever you like.

The first game many of you will ever have played on a computer, the classic card-matcher, is available to play directly through Google Search. 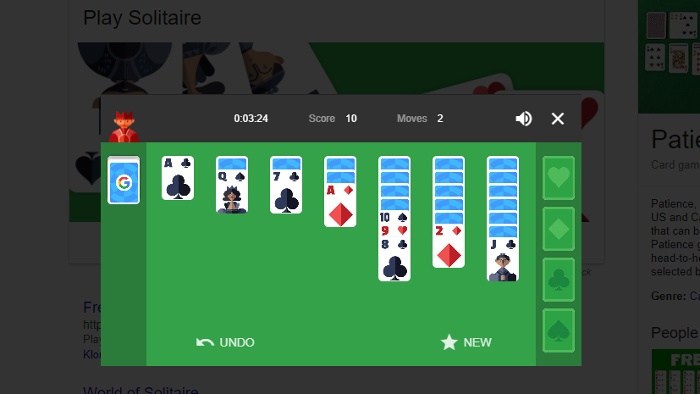 Just type “solitaire” into the Google Search, and hit Enter. It’s the same old game you’ve always remembered – about stacking cards in descending order and in alternating colors. It looks nice, too, with a dash of Google’s design swagger.

Once upon a time Google’s in-house geography trivia quiz was accessible directly through Google Maps by typing “smarty pins” into the search box. For whatever reason, this wonderfully designed little quiz game is no longer there, but you can find it at smartypins.withgoogle.com. 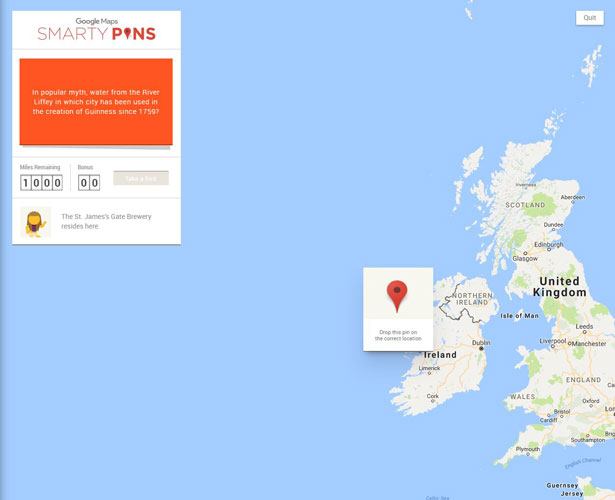 The game uses Google Maps to ask you all manner of questions (ranging from moderately easy to super tough), which you answer by placing the Maps pin on the location where you believe the answer is located. Points are collected in the form of “miles,” and if you’re struggling, then it gives you witty little hints. Compelling, yet kind of educational, so you don’t feel too bad about wasting your time with it.

Related: What You Need to Know About Playing Games in Google Chrome

It’s been around for years, but Google Earth is still kind of mind-blowing, letting you whiz around the planet and zoom in on just about anything, anywhere in the world (well, apart from military bases, North Korea, and the usual sketchy stuff).

Better still, Google Earth has a built-in flight simulator that lets you travel around the world using an actual plane. You can even choose whether to fly an SR22 or F-16 jet and play using a joystick, if you have one. Our advice is to turn on 3D buildings as well, which means you’ll get to experience cities like San Francisco (pictured) in their murky-textured but nonetheless 3D glory. 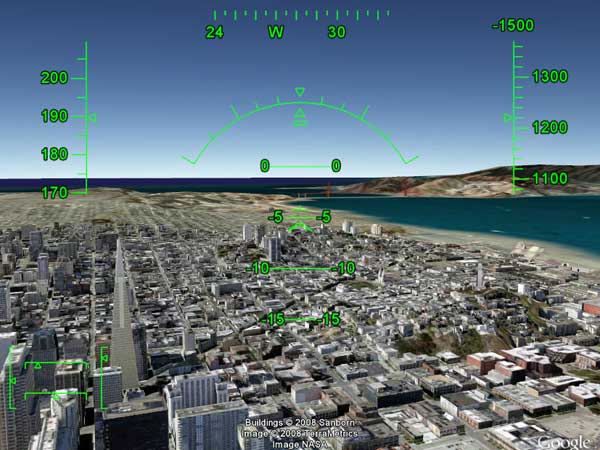 To access it, you need to download and install Google Earth on your Windows, Mac or Linux computer, and then from the menu click “Tools -> Enter Flight Simulator” at the top.

Google knows that the absence of the Internet can make people lose their minds. Luckily, Google hopes to stave off violent reactions with this cute and addictive game. One of the more well-known “hidden” games, this one requires Google’s Chrome browser.

Starring a lone T-Rex in 8-bit glory, you jump over cacti and evade flying pterodactyls in this endless runner. 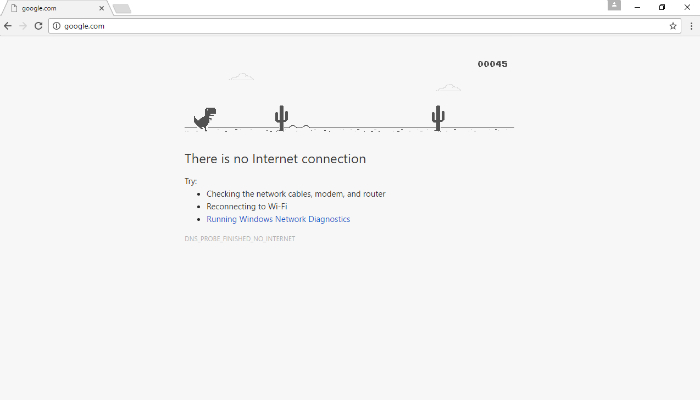 To play, shut off your device’s WiFi or fire up Chrome when you have no access to the Internet. When presented with the “Unable to connect to the Internet” screen (featuring the aforementioned T-Rex), hit the Space bar (or tap on your screen if you’re on a tablet or phone). Get ready because the deceptively-easy game is about to begin. Just keep hitting that space bar to jump.

Referencing the seminal real-time strategy game Starcraft, Zerg Rush is a little simple than Blizzard’s seminal game. For those who have never played Starcraft, the Zerg are a race of insect-like aliens. Performing a “Zerg Rush” requires a player to quickly amass a large army of weak units and use them to overwhelm an enemy. 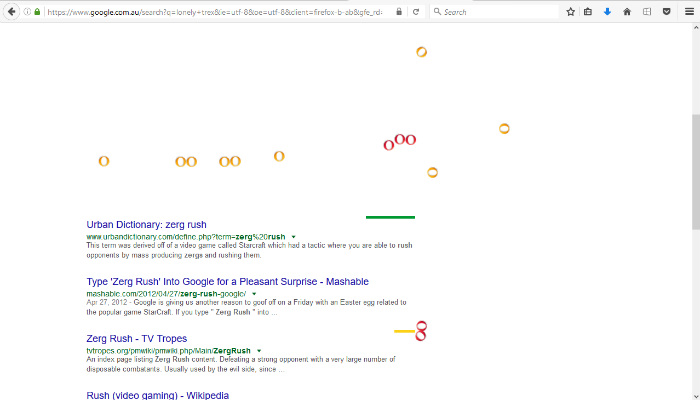 Search “Zerg Rush” in Google and prepare yourself as Google Os swarm in from all corners of your screen. Eventually the Os will destroy the search results, but you can eliminate them by clicking on them with your mouse. How long can you last? 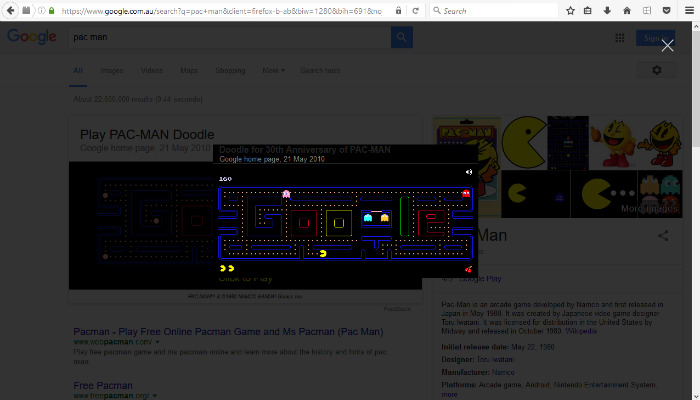 This custom Pac-Man game appeared as a Google “doodle” on May 21, 2010. This playable version of Pac-Man was made to celebrate the 30th anniversary of the incredibly popular arcade game. To start munching on pac-dots, simply Google “pacman,” and you can get down to the timeless business of avoiding Inky, Pinky, Blinky and Clyde. 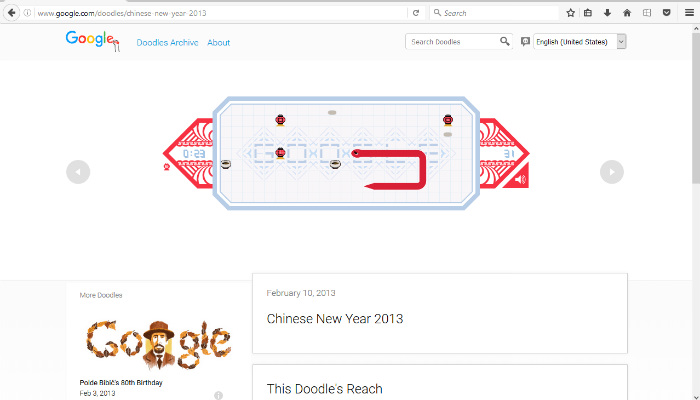 Prepare to feel like Marty McFly and go back in time. The Google Doodle commemorating the 2013 Chinese New Year features a classic game from Nokia-era mobile phone dominance. That’s right, a version of Snake is playable within Google’s search engine. To play, punch in “Google Snake Game,” and click on the top result. 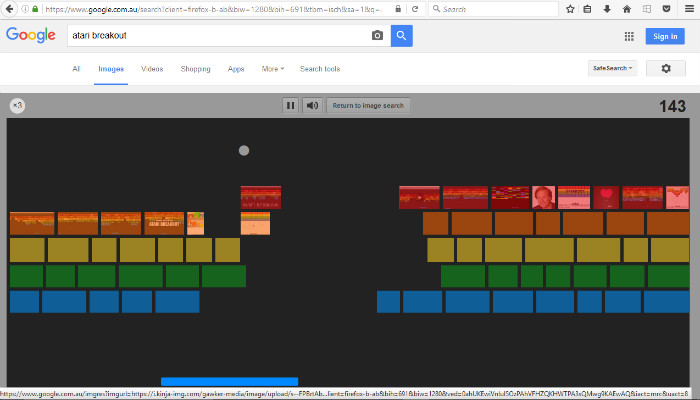 Breakout is a 1972 arcade game developed by Steve Wozniak and Steve Jobs. Players control a paddle that bounces a ball into bricks arranged at the top of the screen. The goal is to volley the ball back and forth between the paddle and the bricks until all the bricks are knocked out. To access this classic, type “Atari Breakout” into Google’s Image Search. All of the search results will morph into bricks. Control the paddle with the arrow keys or your mouse. 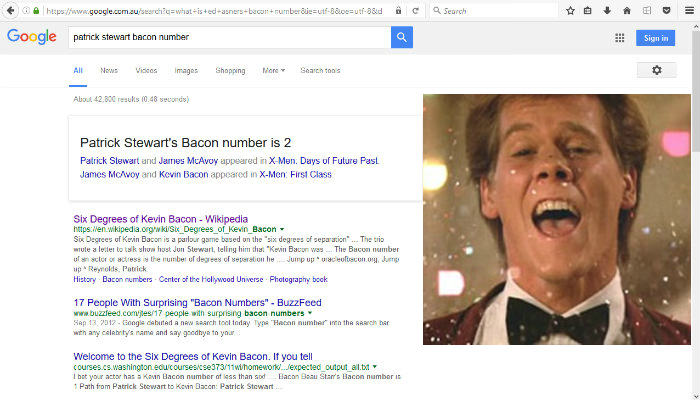 In a 1994 interview with Premiere Magazine, actor Kevin Bacon made an offhand comment about how he had worked with everyone in Hollywood or someone who’s worked with them. This spiraled into a game based on the six degrees of separation between him and other actors. This concept suggests that any two people on Earth are six, or fewer, links apart. In Six Degrees of Kevin Bacon, a player names any actor and attempts to connect him or her to Bacon in six or fewer people. Google technicians must have a lot of free time on their hands since they integrated the game into the Google search engine. Simply type in any actor’s name followed by “Bacon number” to see how far removed that actor is from Kevin Bacon.

Bonus challenge: can you find an actor with a Bacon number of four or above? If so, post the actor’s name in the comments and revel in your mastery of Kevin Bacon-related movie trivia.