In a previous post we talked about HDMI ARC and why you need it in your home entertainment setup. Today, we are going to touch on a new HDMI specification, HDMI 2.1, and how this upgrade is set to revolutionize your entertainment life. But before we delve into the crux of HDMI 2.1, let’s get a refresher on HDMI and how it has constantly evolved over the years.

HDMI, or High Definition Multimedia Interface, is simply a standard for connecting high-definition video devices. It thus provides a faster and more efficient way to deliver high-quality digital video and audio from one compliant electronic device to another. Since 2002, HDMI specification has been revised seven times. The essence of each revision is to provide support for new advances in video and audio technology as well as provide an increased bandwidth to support these new features.

The first version was HDMI 1.0 which was released in 2002, corresponding to the initial release of HDMI. This was followed by HDMI 1.1, HDMI 1.2, HDMI 1.3, and HDMI 1.3a which had nearly similar features, the key difference being an improvement in video and audio capability. These earlier versions lacked in features and are not very common. Then came HDMI 1.4 that changed the rhythm and laid the path for future HDMI versions. If you own a full HD 1080p TV, chances are that it has support for HDMI 1.4.

Some of the major upgrades that HDMI 1.4 brought about include support for Audio Return Channel (ARC), 4K resolution support, and the ability to accommodate 3D Blu-ray Disc standards. Although HDMI 1.4 offers support for 4K resolutions, the frame rate is limited to only 30Hz; hence a need for a more advanced system. HDMI 1.4 was succeeded by HDMI 2.0 that expanded the 4K rendering capability to support up to a 60Hz frame rate (max transfer rate of 18 GPS). Its successor HDMI 2.0a added support for High Dynamic Range (HDR).

HDMI 2.0b built upon the foundation that was laid by its predecessor, HDMI 2.0a, and added support for future UHD broadcasting platforms. It extended the HDR support to the Hybrid Log Gamma format, intended to be used in the upcoming 4K UHD broadcasting platforms such as ATSC 3.0. It’s successor, HDMI 2.1, is more powerful and is considered the technology of the future. 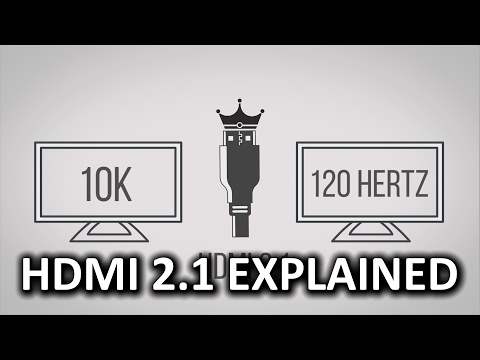 HDMI 2.1 introduces a host of new features and high bandwidth to the venerable cable and connection. Even though most of today’s HDMI specifications can handle nearly all of the current content distributed through cable, DVD, Blu-ray, and in digital media, the TV industry has been growing at a frenetic pace. Deep down the road we are likely to see higher resolutions and higher frame rates on TV. And this is where HDMI 2.1 comes in. Here are some quick specs that make HDMI 2.1 the technology of the future:

One thing you’ll notice is that this update is future oriented and takes into account resolutions and formats that won’t be available for years.

How HDMI 2.1 Will Impact 4K Gaming

If you are a hardcore gamer, you’ll appreciate what HDMI 2.1 promises to bring on the table. Yes, the current HDMI 2.0 is capable of supporting 4K gaming at 60 frames per second, but there are still many compromises that players have to contend with. For instance, 4K gaming over HDMI 2.0 suffers from lag and motion blurs. HDMI 2.1 promises to fix these imperfections. The greater bandwidth supported by HDMI 2.1 means higher resolutions and frame rates.

While HDMI 2.0 supports 4K HDR, HDMI 2.1 takes things a notch higher by adding support for Dynamic HDR. Dynamic HDR ensures every moment of a video/game is displayed with a jaw-dropping clarity with respect to depth, tone, and wider color gamuts.  There is more to gaming than HDR. The Game Mode VRR (variable refresh rate) for consoles and PCs will enable GPU to display the image the moment it is rendered. This, in simpler terms, means a reduction in frame tearing and lag, both of which will increase the level of immersion.

To take advantage of all of these new features, you will need new everything. New TV, new HDMI cables, new games, new copies of your movies, and new source devices. Since most of the content today is still in full HD, with only a handful of digital platforms delivering 4K content, it would be wise to wait until sometime next year or in the future when more content will be available.

With the specs that HDMI 2.1 promises to bring to the table, it’s evident that this upgrade will revolutionize our entertainment life. We are likely to see more TVs and gaming consoles ship with support for HDMI 2.1 from late this year or early next year.

Kenn is a tech enthusiast by passion, Windows blogger by choice, and a massive coffee imbiber. He likes watching sci-fi movies in his free time and tearing gadgets apart so he can fix them.

10 Sites to Download Subtitles for Movies and TV Shows

How to Check the CPU Temperature in Windows 10

How to Convert Legacy BIOS to UEFI in Windows 10

How to Capture a Scrolling Screenshot in Windows 10

How to Fix Copy and Paste Not Working in Windows 10

11 Chrome Flags You Should Enable to Boost Your Browsing