The more business that is being doing via Internet, the more it’s being done internationally. Being able to conduct business via email, text, and social networks means people are reaching out to people in other countries that might be speaking a different language.

While we used to use books and translators to help translate, these are no longer necessary, as mobile devices can serve as great translators whether doing business or traveling. The following is a selection of free iOS apps that will help you translate many different languages. Not all apps that were demoed worked; those have been omitted from this list.

If you’re on your computer and in need of a quick translation, most likely you’re looking it up on Google. Why not do the same with an app? Google Translate is as simple as it gets. Simply choose the language you are starting and ending with, and insert the word, phrase, or section of text that needs translating. The app allows you to save some of your favorite translations, which will come in handy if you’re traveling. The translated phrases can also be spoken aloud by the app 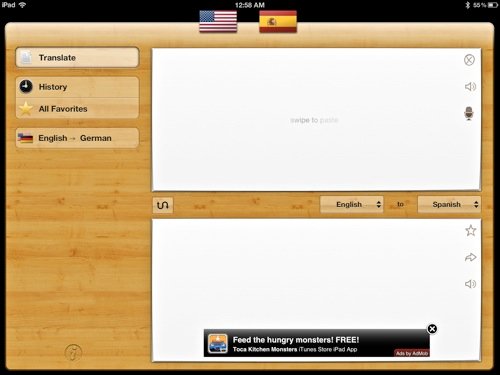 The iTranslate app gives you just a little more, and if you also want even more and no ads, you can pay in app. $2.99 will get rid of all the ads, and $0.99 will allow you for voice recognition so that you can speak the words you want translated. Like Google Translate, it also allows you to save a list of favorite words and phrases. In addition it has a history of the words and phrases you have translated and allows you to easily email the resulting translations. 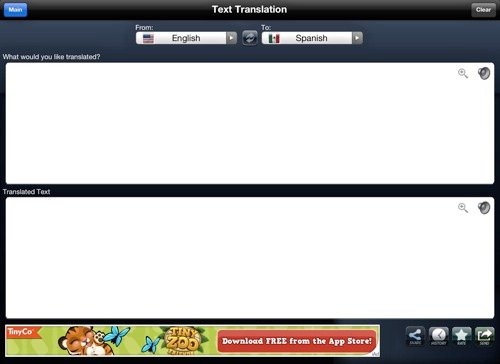 Like iTranslate, the myLanguage Free Translator app has both a free version and paid version. For $4.99, you will gain the option of text-to-speech. Like the other apps you can choose to translate to and from many languages. Additionally, you can share the results by email or SMS, or to Facebook, Twitter, or LinkedIn. 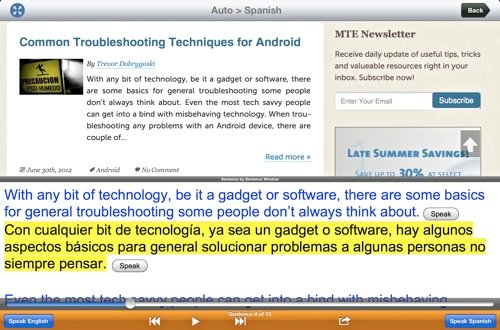 The SpeakText FREE app can seemingly do it all. Not only can it translate sections of text that you type or paste in, it can also translate documents and websites. SpeakText FREE will also read aloud documents and websites without translating them. With the websites and documents, it breaks it down into sections of text. If you choose to just have it speak the text, it will show you the text along with a button to have it spoken. There is also an option to have the text translated at this point. Or you can just have it translated from the beginning. It will still choose sections of text, but will show the translation and allow you to have it spoken if you wish. The benefit of this is that instead of getting a large block of translated text that you don’t understand at all, it shows you the original and translated text next to each other in small sections to help you better understand what is being said.

Having one of these apps pre-loaded on your iPhone or iPad means you’ll never be caught in a frenzied state trying to figure out what people are saying when they’re speaking a different language, when you’re viewing a website that is unexpectedly in a different language, or when receiving a document that is written in a language that is unfamiliar to you.