The Linux community has been divided in recent years over how desktop environments should be used and designed. The open source community, sometimes accused of merely imitating proprietary operating systems rather than innovating, released several new user interfaces that were geared towards touch screens years before the recent touch-oriented release of Windows 8. These interfaces have met with mixed reactions as they were geared towards hardware that, frankly, most users simply did not have access to. There are many Linux touch-oriented desktop environments, but where is the hardware?

Ubuntu currently ships with the Unity shell by default, a relatively touch-friendly interface first introduced for netbooks in 2010. It became Ubuntu’s default environment starting with version 11.04. Its most distinctive characteristics are the large icons situated along a launcher docked to the left side of the screen and a dash that serves to as the primary means of launching undocked apps and files.

By the time Unity appeared on computers, the GNOME Project had already detailed plans for the upcoming GNOME 3, which eventually debuted in 2011. It removed its traditional taskbar along with “minimize” and “maximize” buttons. In their place came a new way of managing windows oriented around creating and switching between virtual workspaces. When the Linux Action Show reviewed GNOME 3, its hosts argued that it would offer a better experience on a tablet than either Android or iOS, but it was a flawed desktop environment.

Since most users did not have access to compatible hardware with touchscreens, they reviewed both desktop environments purely on their usability with keyboards and mice. The result was a large swath of users who felt that they were being left behind.

At the time GNOME 3 and Unity first debuted, the most common devices with touchscreens were smartphones and tablets. Smartphones, given the degree of control carriers exercise over them, are generally notoriously locked down affairs. While neither GNOME 3 nor Unity targeted smartphones, there were and are open source projects such as Plasma Active, Meego, and Ubuntu Touch that users would be able to install were smartphones as open and standardized as PCs. Instead, smartphones ship with locked down bootloaders that have to be cracked, jailbroken, or rooted before users can boot anything other than a phone’s default set of software.

Tablets are essentially large smartphones with their cell radios stripped out. They run the same operating system on the same hardware as their smaller, more agile siblings. Even though most are not distributed by carriers, their bootloaders are just as locked down. Our guide to installing Ubuntu on an Asus Transformer shows just how much work goes into installing Ubuntu onto one of these tablets. And since each tablet ships with different bootloaders and hardware, there aren’t enough skilled hackers available and interested to get Linux onto all of the hardware currently available.

Aaron Siego of the KDE community has served as the primary spokesperson for the Vivaldi tablet, a 7-inch device expected to ship with KDE Plasma Active available by default but with open hardware allowing users to swap it out for their software of choice. The device was announced in January of 2012, but it has yet to see release. It turns out that manufacturers have built their model of production and distribution around the practices of their largest customers, and it’s hard for smaller players to jump in. When the majority of OEMs want mobile CPUs running off of proprietary code, manufacturers see little incentive to create and provide open kernel code and drivers for the small community that cares. Even when open source advocates try to band together to ship open hardware, they simply don’t have control over the internal components that ship inside it.

What’s A User To Do?

Long before the iPad took the world by storm, Windows tablets had made their way into the homes of a niche selection of users. These tablets were generally laptops with screens that could spin around and lie flat on top of the bottom half of the device. This hardware was typically pricey, but installing Linux on it was roughly the same experience as installing Linux on any other PC.

The Lenovo S10-3t is by no means a powerful device by today’s standards, but it can run Linux handedly and gives users the opportunity to live in Unity or GNOME 3 using a touch display. In addition to the Lenovo Ideapad series, Asus has also produced convertible EeePCs capable of running Linux. Both ship with Windows 7 by default.

The onslaught of Windows 8 hardware over the past year has altered the hardware landscape as manufacturers seek to produce devices that take advantage of the new interface. In a way, this is great for Linux. Ubuntu can be installed on the Surface Pro. Linux has also appeared on traditional clamshell laptops with touch displays like the Asus Vivobook: 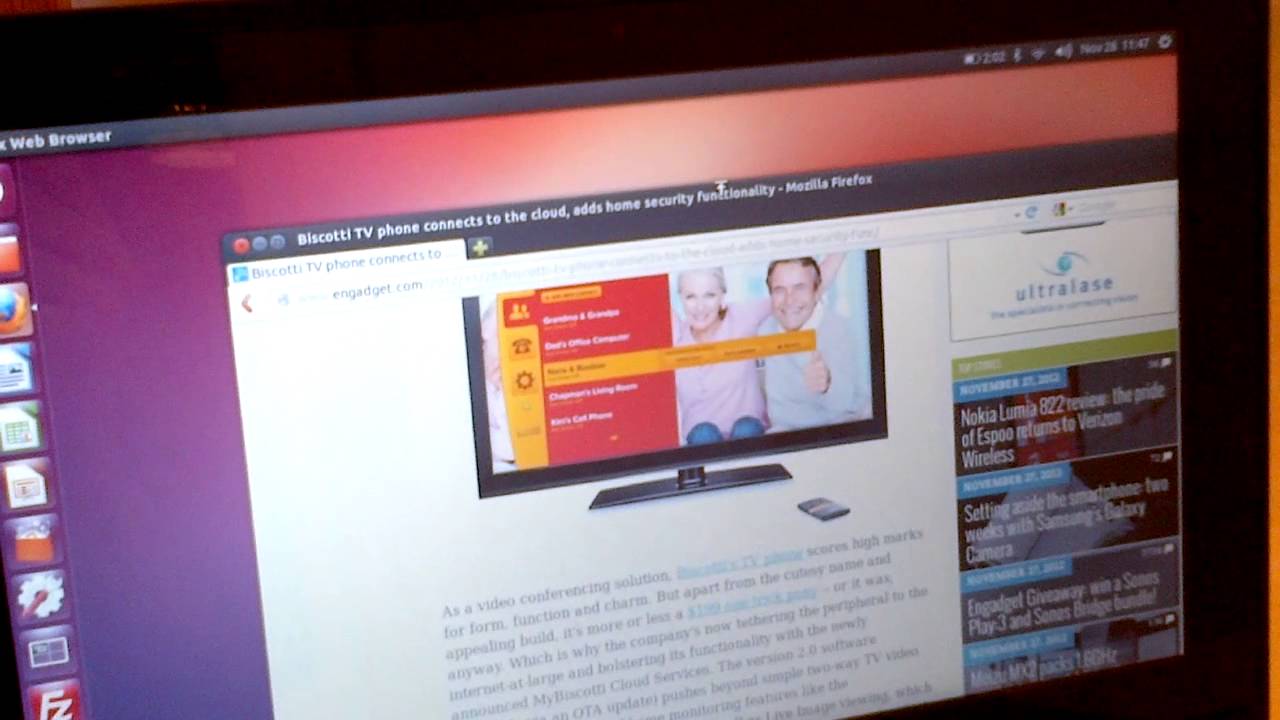 While Windows 8’s secure boot makes it harder to install Linux on some new laptops than before, it’s not impossible. There’s also the Chromebook Pixel running Google’s Chrome OS that, despite its small SSD drive, supports running Linux just fine.

There are many Linux desktop environments that would be killer on a smartphone or tablet, but for years there have been very few pieces of hardware that could run them. That has changed, and touch displays are steadily becoming more available than ever. If you are running a Linux distribution on a computer, tablet, or smartphone, share with us your hardware and experience below.

How to Secure an SSH Server in Ubuntu

How to Find a Specific Word in a File on Linux

Why You Should Use Timeshift to Back Up Your Computer

How to Sync Linux Time With NTP Server

What Is Nohup and How Do You Use It?

How to Check and Control Your CPU Frequency in Ubuntu

How to Fix Broken Packages in Linux
How to Generate A Public/Private SSH Key in Linux
5 Best Software to Sync RGB on Your PC
How to Create Your Own Reddit With Teddit
How to Develop Android Apps in Linux
What is Kali Linux and Do You Need It?
How to Host a Website in Ubuntu Using Tor
How to Install and Update Google Chrome in Ubuntu