Google’s not afraid to reinvent the wheel, as long as they think they can make a better wheel. So far, in my opinion at least, they’re usually successful. That being said, when I first heard about Google Wave, the new browser based communications system, I was skeptical. I like my emails, IMs, message boards and blogs the way they are. Could Wave really transform the way I communicate online? Could Google really reinvent email in a way powerful enough to pull me from my beloved GMail? Well through my massive underground operative network I was able to get one of the beta invitations to try out Wave for myself.

So what is it exactly?

Google Wave is an online tool for real-time communication and collaboration. A wave can be both a conversation and a document where people can discuss and work together using richly formatted text, photos, videos, maps, and more.

Intriguing, but not very specific. Suffice it to say, each “Wave” is like an email thread or message board post. The difference is that you’re not just posting a series of replies (though you certainly can use it that way), you’re making changes to a single document. Each change becomes a branch of the original message. You can roll a wave back in time to see how the conversation has evolved. If you get added to a pre-existing wave, you get the whole thing – the document (or thread) as-is, along with its entire history. Waves can be embedded into blogs, so any time a change is made to that wave it can show up in something like Blogger in near real time. We’ll cover the most interesting Wave features in more detail as we go.

The Wave exists online, and can be accessed a few different ways. The most common would probably be through a “Wave Client”, ie a GMail-like web app that displays your Waves in the browser window. Here is an example of the main wave.google.com

On the far left we’ve got a pretty familiar webmail style menu, with the usual Inbox, etc. Below that is your contacts. Wave seems to have imported my GMail contacts and added those who are also signed in here. The center pane shows your message history much like any email client, including the pic for each participant in the wave.

Things get more interesting when we get to the right pane. Here we can view, edit, and create waves. In this example, I wrote a Kurt Vonnegut quote to Crystal. She responded not by creating a separate reply, but by editing my original words. When I get back to Wave and see her message, Wave highlights the changes she has made.

This means you could use a single wave to have multiple people, say, write a paper for school or collaborate on a family Christmas list. All changes are essentially real time, each change creating a new branch with a complete backup history. In fact, Wave provides a playback feature that allows you to step through the document from creation to the present.

Wave expects and encourages user-developed extensions. As it’s still in development, there aren’t many choices yet. The extensions that do exist are all fairly useful. First, you can perform a Google search and include the results in the wave. No real surprises there. 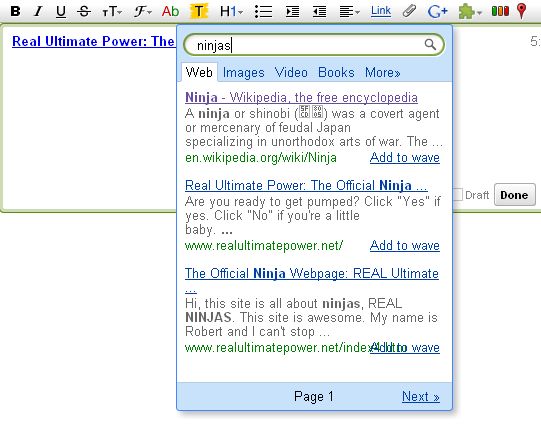 Next is the single-click Yes/No box. Of all the things to include in an early release I’m a little surprised the Yes/No box was one of them, but I suppose it demonstrates some of the things you can do with extensions.

The results were unanimous.

There is also a Maps extension, which is another single click surprise. I have to admit, this would make it a lot easier to exchange directions. 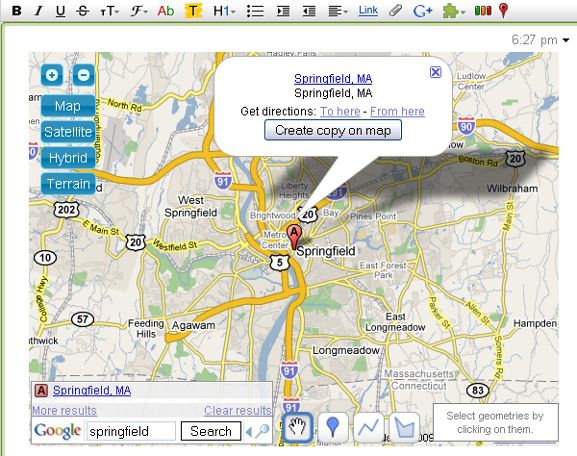 As I write this, a new wave just arrived in my inbox for the Google Wave Extension Gallery. I can browse and install new extensions from within the wave. Presumably the wave will be updated as new extensions come out.

There is FAR more to Google Wave than I could possibly cover here, and this is still a fairly early development version. For those who want all the details, you can find a LONG (80 minutes) video of the tech demo here. For something with so drastically different from email on the technical side, Wave manages to feel surprisingly comfortable. The technology is certainly impressive, and it’s easy to adjust to the Wave way of doing things once you’ve spent a few minutes using it. As for usefulness, that’s a little harder to judge. From what I’ve seen, Wave only works if everyone else is also using it. As great as the map feature may be, the recipient would of course need to be a Wave user as well. Not that this is a flaw in Wave exactly, but it does place a limit on how useful it can be. I think it’s got a lot of potential, and I’ll be keeping a Wave tab open for a while to see how things go, but I won’t go closing my webmail tab just yet.