There are several reasons why you may not wish to make the upgrade to OS X Lion: If you still rely on Rosetta to launch applications with PowerPC code, if you have an earlier Intel Core Duo Mac which cannot run Lion or if you simply do not wish to spend the money and time to upgrade.

However, this does not necessarily mean that you must do without all of OS X Lion’s best features, as much of the functionality of Apple’s latest big cat can be added to Snow Leopard with the tweaking of options, third-party applications and hacks.

OS X has always had good networking abilities but AirDrop certainly made sharing files over two Mac’s a lot more intuitive and streamlined. However, many Mac users have found upon installing Lion that they are not compatible with AirDrop. For these users and for Snow Leopard users too, the popular and free DropCopy application for Mac and IOS makes sharing files a breeze. 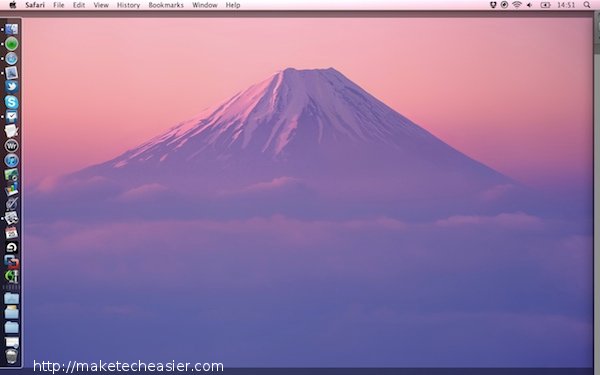 OS X Lion comes with an updated selection of wallpapers. If you would like to make use of these wallpapers on a Mac not running Lion, just head to this Deviant Art page.

When dual-booting OS X Lion and Snow Leopard, I found that the one feature I missed in Snow Leopard the most was the ability to swipe left or right to move between Spaces. Luckily, providing your trackpad supports the multitouch gestures needed, this can be achieved in Snow Leopard with the free application, Better Touch Tool. 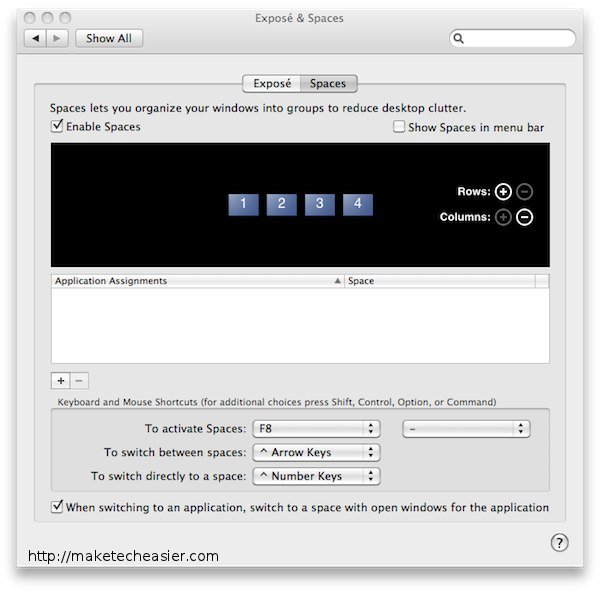 First set up Spaces so that it has four columns, as shown in the above screenshot. Select the drop down menu to ensure that “To Switch Between Spaces” does not correspond to a keyboard shortcut for the time being.

Install Better Touch Tool and it should appear in your Menu Bar. Navigate to Better Touch Tool’s preferences and select the “Trackpad/Magic Trackpad” pane, ensuring that “Global” is also selected on the left, as we want to make this new gesture system-wide. 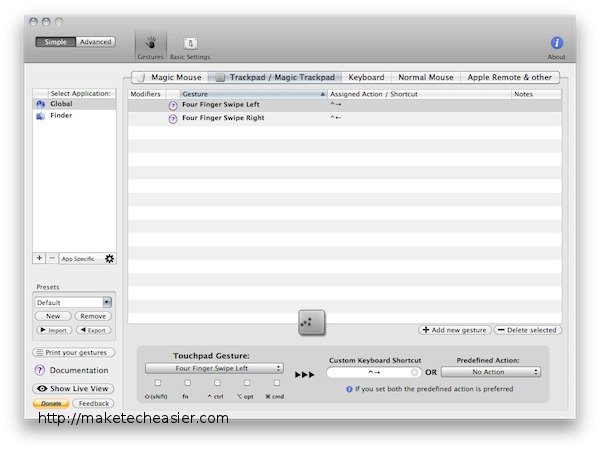 Now, select “Add New Gesture” and “Four Finger Swipe Left” then in the “Custom Keyboard Shortcut” enter control and right at the same time so it looks like the above screenshot, repeating the process for the left swipe gesture.

Next bring up OS X’s System Preferences and access the Trackpad preferences and change the option for “Three Fingers” to dragging.

Navigate to the Spaces preference pane in System Preferences and click on “To switch between spaces” – select the control key option so that it looks like the screenshot below. Finally, you may need to head to your trackpad options and untick the box “Swipe Left/Right to switch applications”. 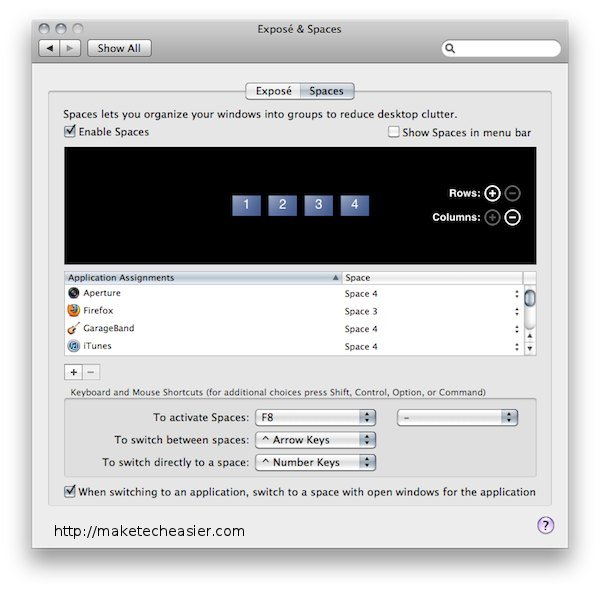 Now you should be able to move between Spaces just by swiping left or right with four fingers! 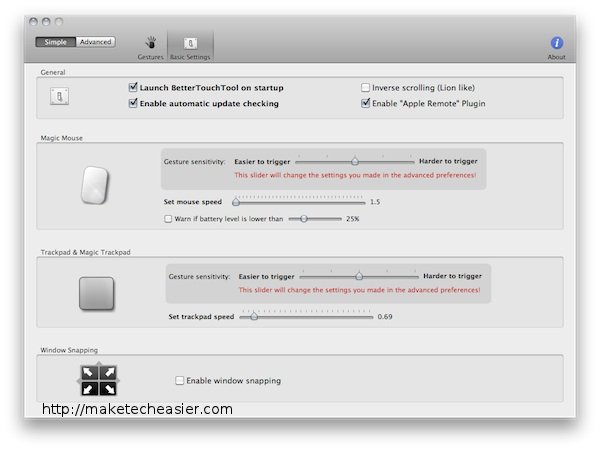 In OS X Lion, Apple brought in reverse scrolling to make touchpad input more iOS-like. If you’d like to try out reverse scrolling on a Mac running Snow Leopard, there’s a few choices but for this guide, I’ll stick with Better Touch Tool.

Launch Better Touch Tool’s preferences once again and click on the “Basic Settings” pane. Head over to the top right of the screen to click on the box next to “Inverse Scrolling (Lion Like)” to complete the change. If you later decide that reverse/inverse scrolling is not to your taste, just head back to Better Touch Tool’s preferences and untick the box to return to default.

OS X Lion allows the user to remove the Dock indicators which show whether an application is running. This is meant to encourage a more “worry free” approach so that the user just uses each application as needed without worrying about whether it is running or not.

While Snow Leopard doesn’t have a simple option to remove the indicators, it can be achieved with a little light hacking:

Navigate to “/System/Library/Core Services/” in Finder and find the icon named “Dock”. 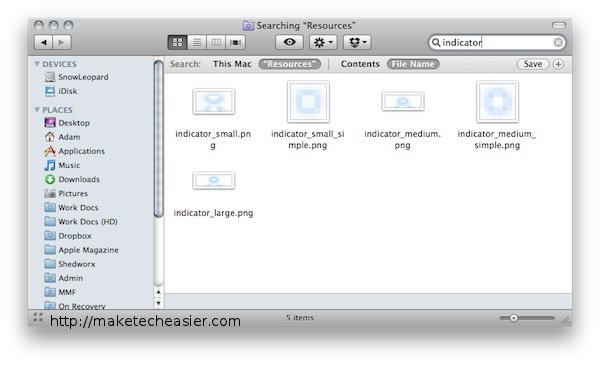 Make a search in Resources via Finder for files which contain “indicator” in their filename (as shown above) and copy them somewhere safe. With your backup copy in place, now move all the original “indicator” files to the Trash.

Launch Terminal and copy/paste the following command to restart the Dock and see your changes take effect:

To return your Dock back to normal, simply replace the filenames which contain “indicator” and repeat the killall command in the Terminal.

One of the more debated additions to OS X Lion is Launchpad, which brings iOS-style launching of applications – some love it, some hate it. If you’d like to get an idea of your feelings on the matter while staying in Snow Leopard, Araelium Group’s QuickPick application brings much of the functionality and look of Launchpad to OS X Snow Leopard. 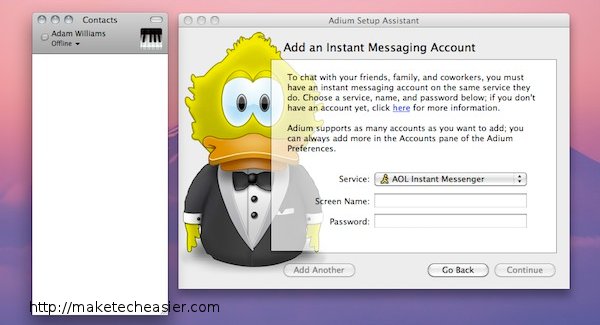 iChat now enables all your contacts lists to be merged into one window, whatever account they’re on, helping to cut down on much needed screen space. There’s no hack or workaround that I’m aware of to pull this off on Snow Leopard with iChat, but Adium can. Adium is much more flexible than iChat for messaging but be aware that it does not allow video or voice calls – just text.

While the above tips and tricks can’t quite offer all the benefits of OS X Lion, they should at least serve to give your Mac some interesting new features to make use of and perhaps help you decide whether to stick with Snow Leopard a little while longer.