Playing games on your Android device without an Internet connection can be a real life saver, especially when you’re sitting in a waiting room. A power outage or problems with your ISP can leave you without being able to do a lot of things, such as playing a game on your phone.

The following games are not only entertaining but don’t require an Internet connection. The games for Android on this list are not only free but are very popular on Google Play. You’ll wind up playing for hours on end since the games can also be very addictive. 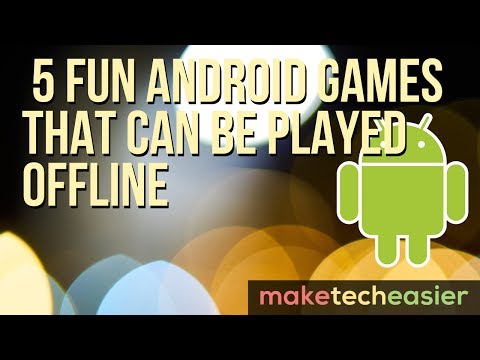 Shadow Fight 2 is a game where your mission is to become the best ninja warrior ever. When you first launch the game, you’ll see a video of the story behind the game. Then you’ll be guided through things such as where you can find your weapons and where you can practice your fight moves.

Earn coins by defeating your opponents and buying more sophisticated weapons with your earnings. You can also participate in a tournament against the toughest opponents you’ll ever face. Equip yourself with countless lethal weapons, rare armor sets, and dozens of expert-level martial arts moves to survive. It’s a great game if you love fight games that take place in ancient Japan.

Satisfy your need for speed with GT Racing: The Real Car Exp. With this racing game for Android, you can enjoy racing with over seventy-one cars on thirteen different tracks, including Mazda Raceway Laguna Seca in California.

To get started you have one free car, but you can also buy other models from companies such as Ferrari, Mercedes, Dodge, Nissan, Ford, and more! You can either play by yourself or have fun with the multi-player mode. There are four ways you can view the race: interior view, bumper, far, and near.

You can also decide how good you want the game’s graphics to be – they can either be optimal or best graphics. To win some easy cash, play the Classic Race as much as you can since it’s a very easy race to win. It’s a very addictive game if you love racing games.

With BombSquad you’ll have fun blowing up your friends in mini-games that go from hockey to capture the flag. The game also offers eight-player local/networked multiplayer, so you’ll always have someone to play with. On top of that you’ll also face ninjas, barbarians, insane chefs, pirates and who knows what else!

You’ll have to either kick, walk, box, or run to survive dangers such as sticky bombs, landmines, and other threats. Don’t forget to grab all the boxes that will appear since they contain health, sticky bombs, power-ups, and shields. The game will guide you through a tutorial so you know how to stay alive.

If you’ve played Angry Birds, then you already know how to enjoy this game. The Angry Birds are back and angrier than ever to go up against those evil pigs. In the sequel you’ll have to face some tough multi-stage levels, but you’ll have access to the birds that will get you through them.

Start with the red bird, and as you advance you will find keys that will unlock more characters. At first the pigs are easy to defeat, but as you advance, things get more difficult.

The more damage you cause the better since you win cards that will add more birds to your crew. That way you can choose the best bird for the challenge you’re facing.

There are a lot of games that you can play offline, but you’ll definitely be entertained with the above options. Whether you want to play alone or with friends, you can’t go wrong with the games on this list. What are your favorite offline Android games? Share your thoughts in the comments.

Is this article useful?
Fabio Buckell

Just a simple guy that can't enough of Technology in general and is always surrounded by at least one Android and iOS device. I'm a Pizza addict as well.

How to Uninstall Bloatware and System Apps without Root in Android

11 of the Best DLNA Streaming Apps for Android

How to Share Files Between Android and Windows on Your Network

6 of the Best Game Boy Advance (GBA) Emulators for Android

How to Stream from Android to Airplay

How to Mount an SD Card on Your Android Device

What Is Android System WebView and Should You Uninstall It?